It could be any city . . . any big international anywhere city. It could be Victoria. It is every city. In his classic parable play Good Person of Setzuan, Bertolt Brecht asks many difficult questions of his characters and of his audience. Why is it so hard to do the right thing, to be a good person? 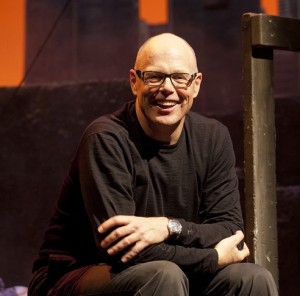 While developing his current production for the Phoenix Theatre, director Conrad Alexandrowicz couldn’t help but think not only of those caught in the global economic crisis, but also of the poverty and homelessness in his own city. “I was curious to see how the philosophical questions and moral lessons of Brecht’s original translated to a world that has grown more thoroughly corporatized and materialistic than that of his day,” says  Alexandrowicz, not only a professor in UVic’s Theatre department but also the Artistic Director of Wild Excursions Performance.

“We live in one big globalized world now,” he continues. “Corporatized culture and branding in China is as similar to its effect in North America as it is in many places across the world. Now more than ever, this parable is universal and therefore, it could also happen here in Victoria. Brecht’s play is as topical and poignant now as when it was written—if not more so.”

The trials of living in Victoria were recently recounted in the Vital Signs report (produced by the Victoria Foundation). It described a city where a “living wage” that keeps up with expenses should be $18.07 per hour, but the minimum wage is only $10.25—and 11.3 percent of people in the region live in poverty and rental costs continue to increase . . . if, at three percent rental availability, you can find a suite available at all.

Economic times are also tight in Brecht’s mythical city of Setzuan when three gods come in search of “one good person.” They are dismayed to find the search is so difficult. After seeking accommodation at many households, wealthy and otherwise, it is at the home of an impoverished young prostitute, Shen Te, that they find good will. However, Shen Te’s troubles really begin after a thank-you gift from the gods places her new-found status, new tobacco shop and her generosity in jeopardy and makes her an easy mark for theft, deceit and corruption. To avoid financial ruin, she re-invents herself as Shui Ta, a shrewd, no-nonsense male cousin to protect her business interests.

“It’s an incredibly clever play,” says Alexandrowicz. “Brecht shows great depth in his understanding of the human condition and the way that different classes operate in a money-centric society.” 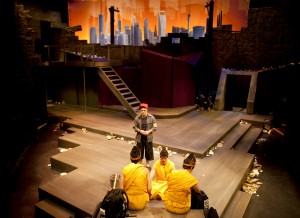 Alexandrowicz’s vision for the play is mirrored in the set designed by fourth year student Simon Farrow. It is dominated by a large panoramic skyline of a big “anywhere” international city that includes references to Shanghai (World Financial Centre), New York (the waterfront), Johannesburg (the designer’s home town), Kuala Lampur (Petronas Twin Towers), Dubai (Burj Dubai) and Soweto (Orlando Nuclear Towers). Recent MFA grad Bryan Kenney‘s lighting design spotlights the action, including Brecht’s many theatrical asides where the actors philosophize to the audience, and creates amazing coloured evening skies behind the row of skyliners. These corporate towers loom over a downtrodden slum that can magically transform from Shen Te’s tobacco shop, to Sandalmaker’s Lane, to a restaurant’s private dining room. 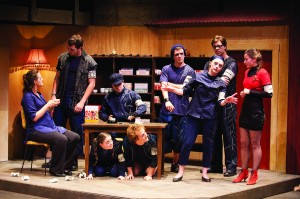 Some of Kat Jeffery’s costumes for Setzuan (photo: David Lowes)

The costumes for Setzuan’s residents, designed by fourth-year student Kat Jeffery, also have a globalized inspiration, merging Western street style with a sense of Orientalism which seemingly channel the uniform-like style that became synonymous with China’s communist revolution. The three gods, on the other hand, are colourful hybrids of many eastern deities. In a reference to growing corporatization, the Setzuan slum’s characters all sport armbands that promote different international corporate brands.

Third-year student Francis Melling has composed music to accompany Brecht’s song lyrics in the play and is overseeing the music direction. “Francis is incredibly talented,” says Alexandrowicz. “He’s integrated Brecht’s lyrics into contemporary pop music that will have you singing along by the end!”

Good Person of Setzuan runs November 8 – 24 at the Phoenix Theatre. Evening performances run Tuesday to Saturday at 8pm, with a 2pm matinee on November 24.

There will be a pre-show lecture by director Conrad Alexandrowicz at 7pm Friday, November 9, where he’ll share his inspiration and ideas around this production. All are welcome no matter which day your tickets are for. (This lecture will be recorded and the audio file posted on our website for your listening pleasure the week following the lecture.)