After 25 years, the Lafayette String Quartet is making even more beautiful music together

The last place you’d expect to find the origins of an internationally acclaimed string quartet would be in a booth at McDonald’s. But that’s exactly where it all began for the Lafayette String Quartet back in 1986. “We were all in a chamber orchestra in Detroit and had this dream of becoming our own string quartet,” recalls violinist Sharon Stanis, “so we met at a McDonald’s and made the big decision.”

Not the classiest of venues, to be sure, but it’s all been up from there. Over the past 25 years, the LSQ has gone on to play concerts and festivals in all but one Canadian province (better tune in, PEI), more than half the American states, and eight countries worldwide; they’ve won major prizes, received awards for their recordings (notably 2003’s Death and the Maiden), have been the subject of a book (David Round’s The Four and the One) and still maintain a punishing touring schedule, in addition to their teaching duties as Artists-in-Residence at UVic’s School of Music. 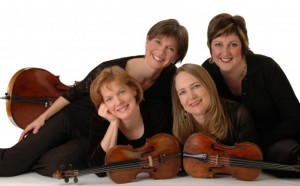 The Lafayette String Quartet, with Sharon Stenis on the far right (photo by Frances Litman)

They also remain the only all-female ensemble in the world to still feature the original members—which Stanis credits to their individuality. “In our earlier years, it was always the group first: ‘What’s best for the quartet?’ But the reason we’ve been successful for 25 years is that we’ve since changed the focus to, ‘What’s great for the individual?’—because if the individual is happy, then the whole quartet is happy.”

Indeed, the collective acclaim of the Lafayette String Quartet can very much be attributed to the sum of their parts: Ann Elliott Goldschmid (violin), Joanna Hood (viola) and Pamela Highbaugh Aloni (cello), as well as Stanis. And not only are the LSQ popping the cork on their silver anniversary in 2011, but they’re also simultaneously celebrating two decades at UVic. “That has provided a great foundation for us,” says Stanis. “They took a chance on a five-year-old quartet, but UVic has shown a strong commitment to us . . . I feel very fortunate to be here. Not all universities have a resident string quartet, and there’s a real mentoring by having all of the string teachers in one ensemble.”

Looking back over the achievements of the past quarter-century, it’s clear Stanis feels the lasting contribution of the Lafayette String Quartet can best be found in their students. “In music, as with other professions, you’re handing down to the next generation . . . when I first arrived here in my early 30s, I felt like I was educating people to become working violinists in symphonies—but now I feel like I’m educating people on how to live and be passionate, how to work hard to make something beautiful. That’s our job, basically; we’re not educating musicians so much as we’re educating human beings.”

While the LSQ will be celebrating with a full year of performances—including a residency at the prestigious Banff Centre, a return to Ontario’s acclaimed Festival of the Sound and a highly-anticipated Eastern Canadian tour—it all kicks off in July at the annual Victoria Summer Music Festival. But, after 25 years, are there still new pieces for them to learn? “Tons,” Stanis laughs. “For instance, Haydn wrote 83 quartets and we’ve learned maybe 25, and we only know two of Shostakovich’s 15 quartets . . . it’s hard to squeeze in new pieces when you’re juggling teaching, administration, touring, practicing and family life.” And is there an ultimate musical goal for the LSQ? “Well, we’ve already learned all 16 Beethoven quartets, which is a cornerstone for any string quartet, but I think the Shostakovich is the one that we’d all like to set our sights on—so we’ll need to put a couple in our pockets every year.”

Stanis admits it hasn’t always been easy being an all-female quartet—two of the group are mothers, which meant touring with infants, and one has survived breast cancer, which led to the ongoing annual Lafayette Health Awareness forums—but she’s clearly pleased with how the concert world has evolved. “Twenty-five years ago, it was common to have one or two women in a quartet, and there were probably only six all-female quartets—but now? They’re all over.”

Much like the distinct parts they play in their music, Stanis again emphasizes the importance of their individuality. “We’re such four different personalities but somehow the whole vive la différence has helped bind us together. We’ve had our share of big arguments, but it’s through those that we’ve come to a consensus, a respect and an honouring of each other’s opinions, lives and lifestyles.”

And did they ever expect it to last this long? “I remember us saying, ‘Let’s try two years and see how it goes.‘” She pauses and laughs again. “I don’t even know if we checked in after two years; we were too busy chasing our tails, trying to get the next concert, the next gig, practice the next piece . . . I don’t think we ever imagined it, but it happened.”