As the last act wrapped, Department of Theatre undergraduate student Fiona Donnelly-Rheaume looked around the great hall of UVic’s First Peoples House with tears in her eyes. “I still get choked up thinking about it,” she says. “Elder Vic Underwood, a residential school survivor, addressed the settler children as if no one was in the room and thanked them for caring.” 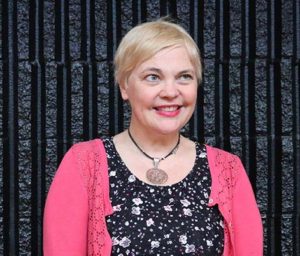 As the final project in her theatre degree with an applied theatre focus, Fiona—under the mentorship of Education’s Phil Duchene—worked with Royal Oak Middle School students to perform the play No Stepping Back during UVic’s 2018 IdeaFest.

Written by Duchene and Theatre professor Warwick Dobson, No Stepping Back addresses the complex history of residential schools and their catastrophic effects on Indigenous communities, families and individuals. “Theatre is a powerful tool that can bring about social change and help to build a stronger community,” says Fiona.

Not your typical student

As a young military wife and mother, Fiona joined theatre groups in every town where her family was transferred. “It helped me learn to adapt to change and express my feelings,” she explains. ”And the people I worked with became like my extended family—people I could lean on.”

It was that experience that led Fiona to UVic to study theatre at the age of 48. “Despite being older than my peers, I immediately found my place in the theatre department. It seemed everyone shared my belief that theatre could help heal people and communities.”

Her passion and hard work on projects like No Stepping Back didn’t go unnoticed; her professors nominated her for the Muriel Conway Memorial Scholarship. “I was sitting in a coffee shop when I received the email,” Fiona recalls. “It was like a scene in a television show: my knees buckled, and I was overcome with shock and happiness.” 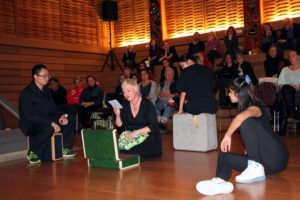 Fiona in an applied theatre play during 2015’s Diversity Forum

Fiona’s decision to pursue her degree meant she would have to live separately from her daughter and husband, who was still in the military and stationed in Yellowknife. “Receiving donor support not only took some pressure off my family financially, but it meant someone saw promise in me and I can only hope to live up to that promise.”

One of many to receive support

Fiona is one of 3,052 UVic students who received a donor-funded scholarship or bursary in 2018/2019. UVic surpassed its fundraising goal by $3 million this year, raising $18.9 million from 4,795 donors. The funds increased the number of students supported by donor-funding by 2 percent with 89 new awards.

“The UVic community should all be extremely pleased that donors are willing to invest in our university at this level.  It is a clear indication of their confidence in the quality of research and creative pursuits of our faculty and the calibre of our students.” says Associate Vice President of Alumni and Development Tom Zsolnay.

Donor-funding not only helps students, 44 percent of the money raised this year funded programs, infrastructure and library resources.

“Donor investment in UVic is critical to the university’s ability to pursue excellence in research and teaching that has a meaningful impact on our world,” says Zsolnay.

For Fiona, who graduated in spring 2019, the support she received from donors is inspiring her to give back. “I can’t say thank you enough,” she says. “I hope to use theatre as a learning tool to address social issues and build stronger communities.”