You might think that wearing a mask is a way to hide from others, but Department of Theatre alumna Kate Braidwood discovered while she was studying here at UVic that masks are a fun and engaging way to express herself on stage. 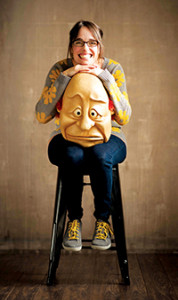 Now, as the co-founder of the multi-award winning WONDERHEADS physical theatre company, Braidwood works with her husband Andrew Phoenix to create playful characters through full-face masks. They then integrate these “wonderheads” into performances fraught with exquisite visual storytelling.

LOON, which opened the Phoenix Theatre’s 2015/16 season on October 14, is just one of the acclaimed productions for which this international touring theatre company is known. LOON tells the story of Francis, a lonely janitor with a child-like imagination and a wild fascination with the moon. Unfortunately, Francis hits an emotional rock bottom and he feels like there’s nowhere to go but up . . . and up! It’s a surprising mix of physical theatre, comedy and pathos, all wrapped up in a peculiar, but beautiful, love story.

With their creative use of full-face masks, expressive physical movement and inventive lighting and sound cues in place of words, WONDERHEADS’ shows have been compared by CBC Radio to watching “a living cartoon for lovers and dreamers.” (Watch this online trailer.) With “Critics Choice” and “Best Show” awards ranging from Vancouver to Orlando, they have been successfully changing audience’s perspectives on the nature of theatre and storytelling across North America. 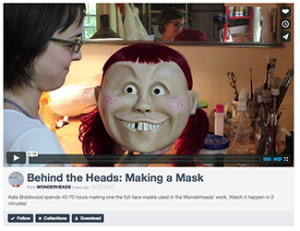 Braidwood and Phoenix create all of their full-faced, oversized masks from scratch. First they sculpt the head and facial expression out of modeling clay. The head is then covered with liquid rubber to capture expressions into a casting mould, and strips of plaster-soaked cloth are laid around this rubber to construct a hard exterior shell. When it’s dry, the rubber mould is filled with strips of papier-mâché to create the actual mask. The final mask is given eye and air holes, painted lovingly with rosy cheeks, or freckles or whatever is needed for the character, and then topped with a hairdo.

Braidwood attributes much of her direction in life to her studies in the Department of Theatre’s Acting Specialization program. “My time at UVic played no small part in my journey that led to founding WONDERHEADS,” she says. “It was at UVic that I first performed with masks. I was lucky to have Peter Balkwill [of Old Trout Puppet Workshop fame] as a movement teacher at the time, and creating vocal masques in Jan Wood’s class shed light on the path to devising and creating my own original work.” 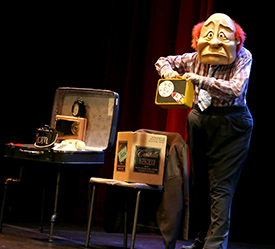 Love is in the air at LOON (Second Glance Photography)

After graduating in 2003, Braidwood trained at Dell’Arte International, a physical theatre school in California, where she met Andrew  Phoenix. “During the process of creating our first show together, we happened to fall in love,” she recalls. “We got married, and when it came time to create our next show we thought ‘love’ would be a fitting theme. But LOON isn’t just about love; it’s also about loneliness, loss, and letting go. It’s about remembering how a person or experience helped shape who we are, and how we keep them in our hearts as we move on.”

Now based out of Portland, Oregon, and as Co-Artistic Director of her own theatre company, Braidwood is also appreciating other aspects of her education. “The program at the Phoenix trained us to have a wide range of skills in the theatre, and the importance of being multi-faceted is integral for me today now that I run my own company,” she says. “When I moved on from the Phoenix, I kept the experience in my heart, and it is an honour to return to share my work with current students.”