Adapting The Waste Land for the stage 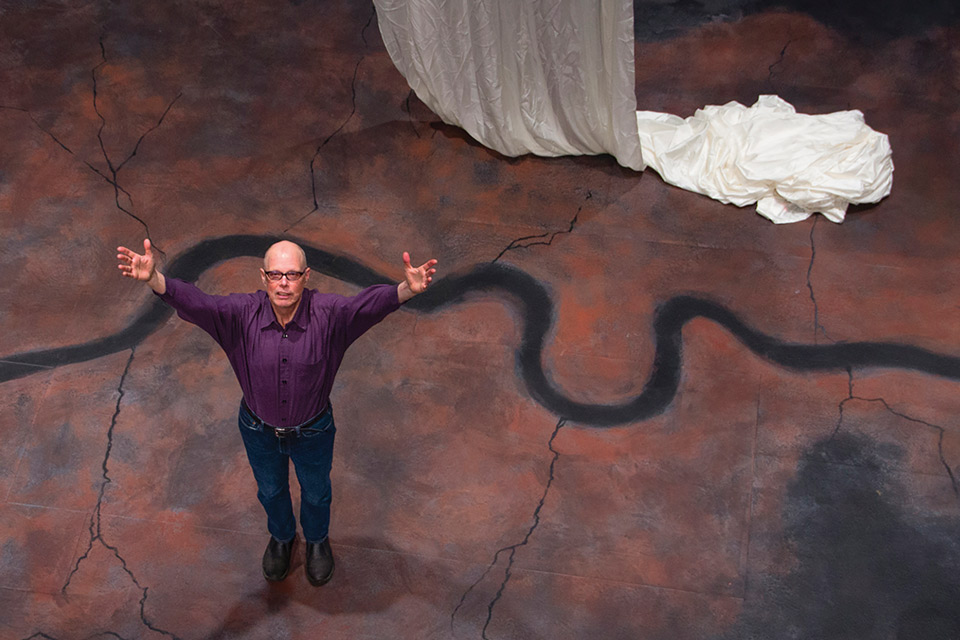 Prof. Conrad Alexandrowicz stands on the set floor of The Waste Land, painting to represent a map of the Thames river meandering across London. Set design by Lisa Van Oorschot. (Photography by John Threlfall).

Since its publication in 1922, T.S. Eliot’s landmark modernist poem The Waste Land has never ceased to be controversial. Inspired by the physical and emotional devastation of both the First World War and the global influenza pandemic, Eliot’s 433-line poem has spawned countless courses, studies, reviews and books. But, over the course of its 100-year life, The Waste Land has rarely been adapted for the stage—and usually only for solo performers.

Now, theatre professor Conrad Alexandrowicz has taken on the somewhat daunting task of directing and choreographing his own adaptation for a February 17-26 full-cast run at the Phoenix Theatre.

“This is not a play, and it completely ruptures all the rules of drama,” explains Alexandrowicz. “The attention of the poetic voice is constantly changing … but I wanted to create continuity within the piece, so I’ve rearranged the text to create dialogue—which was really an amazing thing to do, as it works brilliantly and reveals meanings in an entirely different way. So yes, every single line he wrote will be spoken—sometimes more than once—but not necessarily in the order [he wrote them].” He pauses and laughs. “I’m sure T.S. Eliot would really hate that.”

No stranger to stirring strong emotions in his audiences, Alexandrowicz is a physical-theatre maker who specializes in the creation of interdisciplinary performances which address subjects central to the human journey: issues of relationship, gender and power, and the nature of the performance event itself. Given that The Waste Land has been described as “the most revolutionary poem of its time” and still has the ability to spark controversy a century after its publication, Alexandrowicz’s unconventional adaptation seems ideally suited to such nonconventional source material.

“We’ve never done this kind of abstract physical theatre at the Phoenix, so I’m really interested to see what people will think of this adaptation,” he says.

Working with a cast of 13 students plus four designers, Alexandrowicz is taking his creative cues from the poem itself. “In one scene, for example, Eliot quotes a song called ‘The Shakespearean Rag’—so we have a singer appear and the rest of the cast comes running on and suddenly we’re in a musical—then all that disappears and we go back to scene that was interrupted. I’m trying to embody and reveal as much as possible given the shifts within the text.”

Another aspect of this adaptation Eliot would likely hate is the foregrounding of the poem’s homosexual subtext, which offers a marked contrast to the poet’s famously disastrous first marriage. While  studying in Paris as a young man, Eliot shared a rooming house with Jean Verdenal, a medical student who then died during WWI.

“There is very significant and convincing evidence that he was very much in love with this man,” says Alexandrowicz, whose first book was Acting Queer: Gender Dissidence and the Subversion of Realism. “There are a lot of tensions in the text I’m trying to reveal. But, as a gay man, I really want to bring this relationship to the forefront and pull it out as a narrative thread people can follow.”

While he appreciates this adaptation may not satisfy Eliot purists, Alexandrowicz insists that—much like The Waste Land itself—there’s meaning beyond what appears on the page.

“If you’re really exploring something, you’re going to create strong feelings in response to it,” he concludes. “I think, in these times of crisis, we should be trying to create vital drama.”