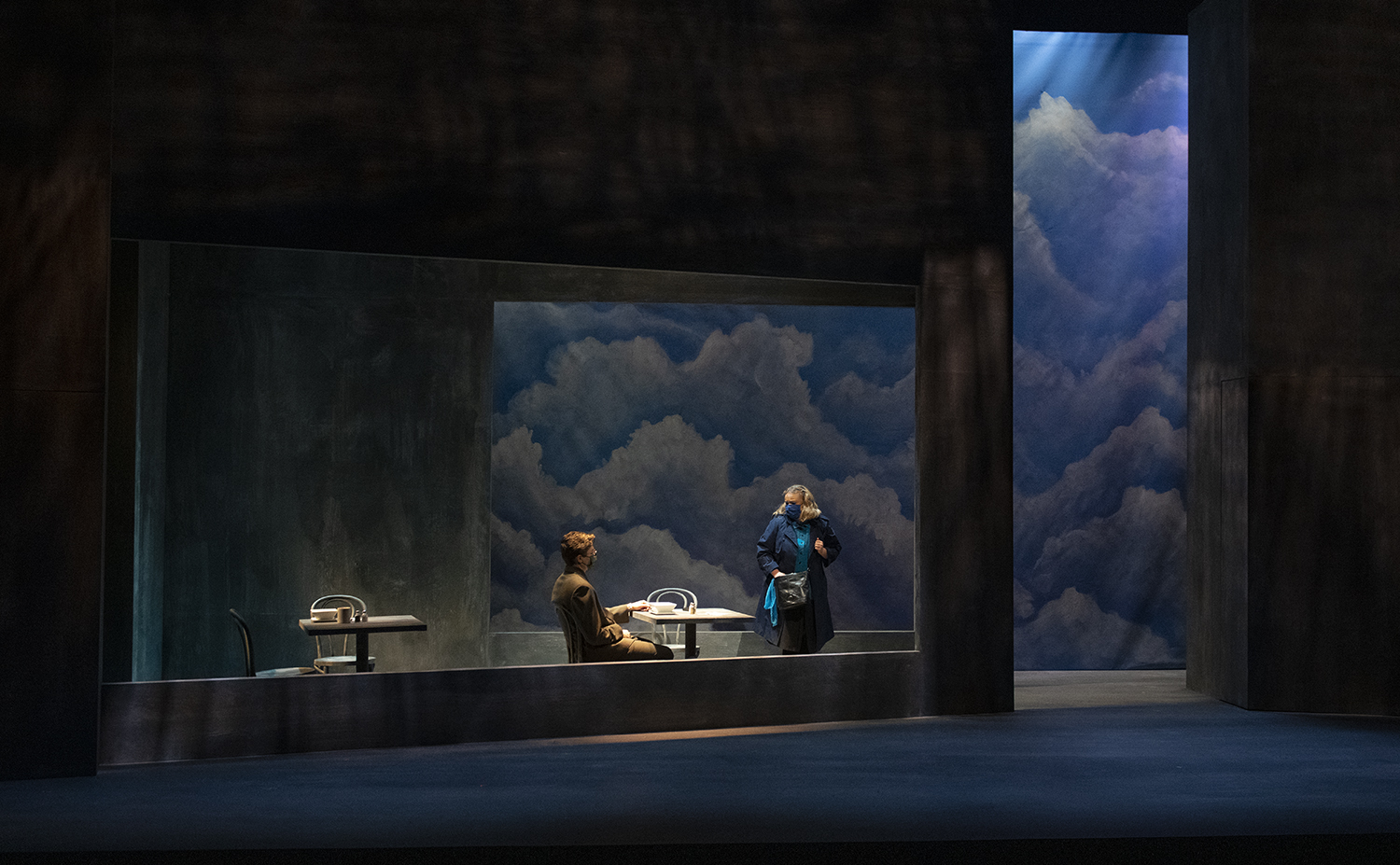 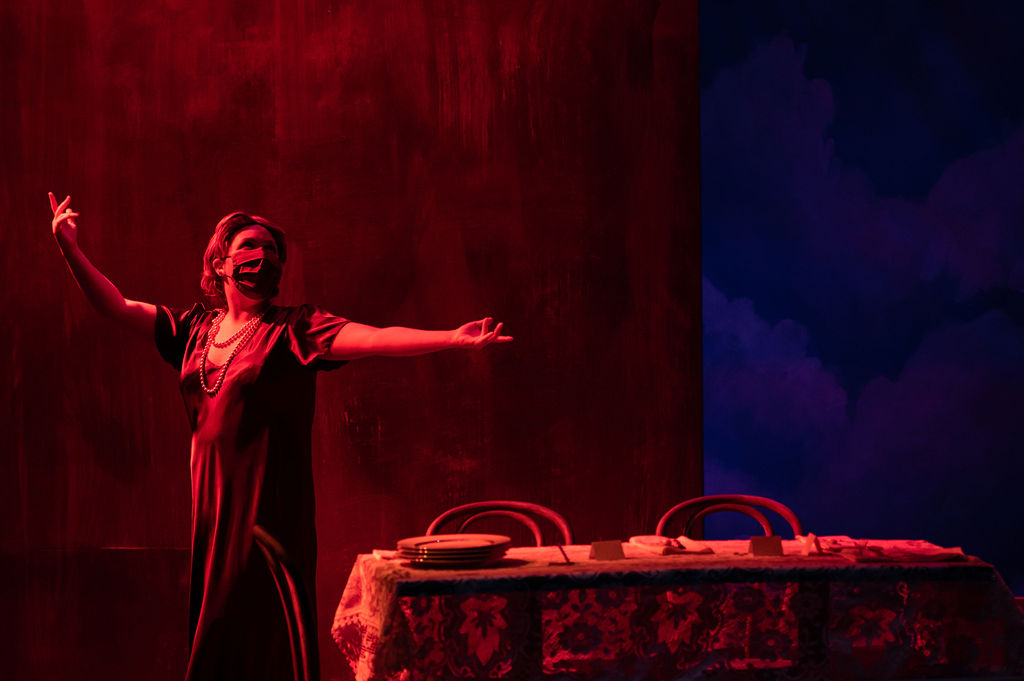 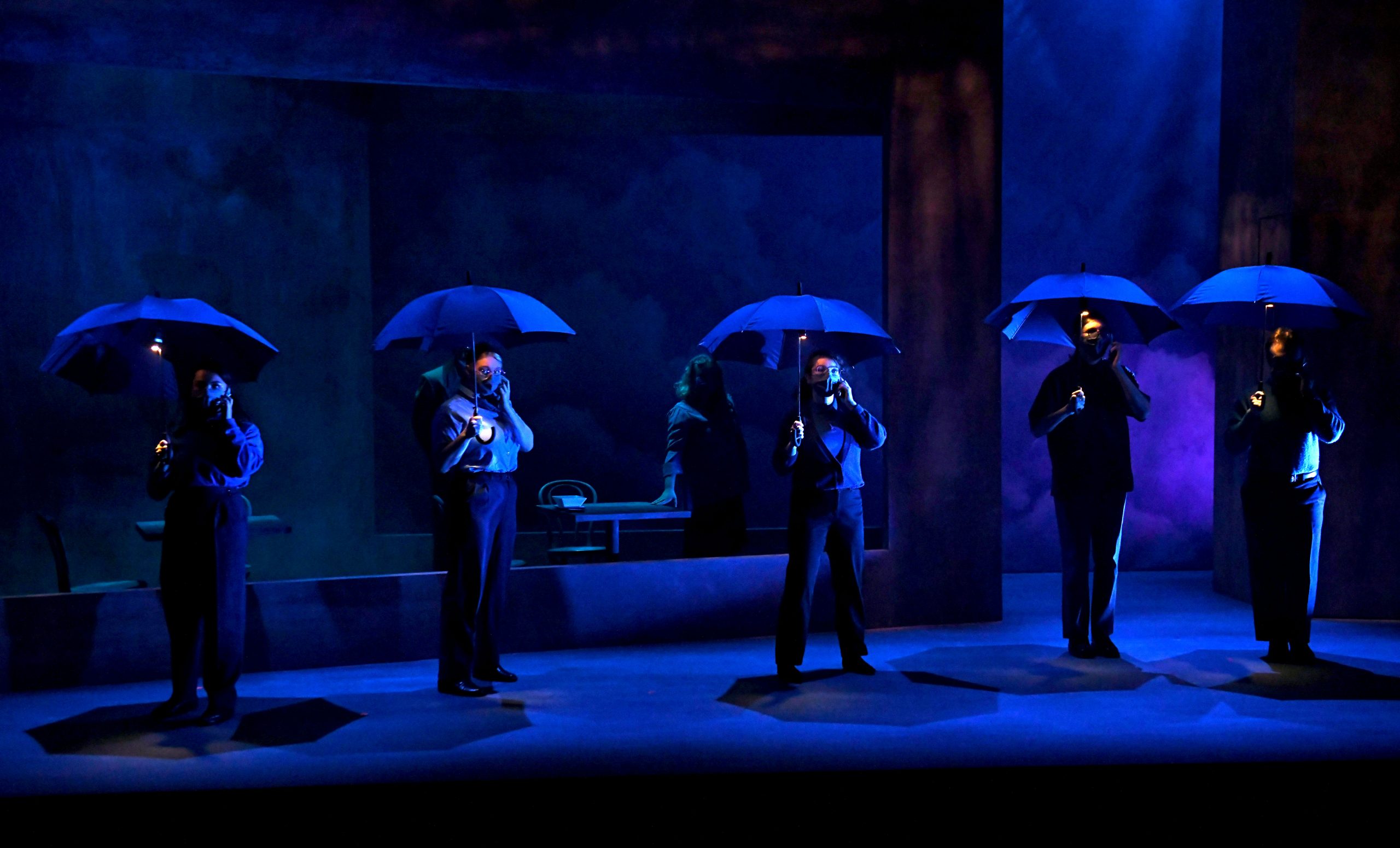 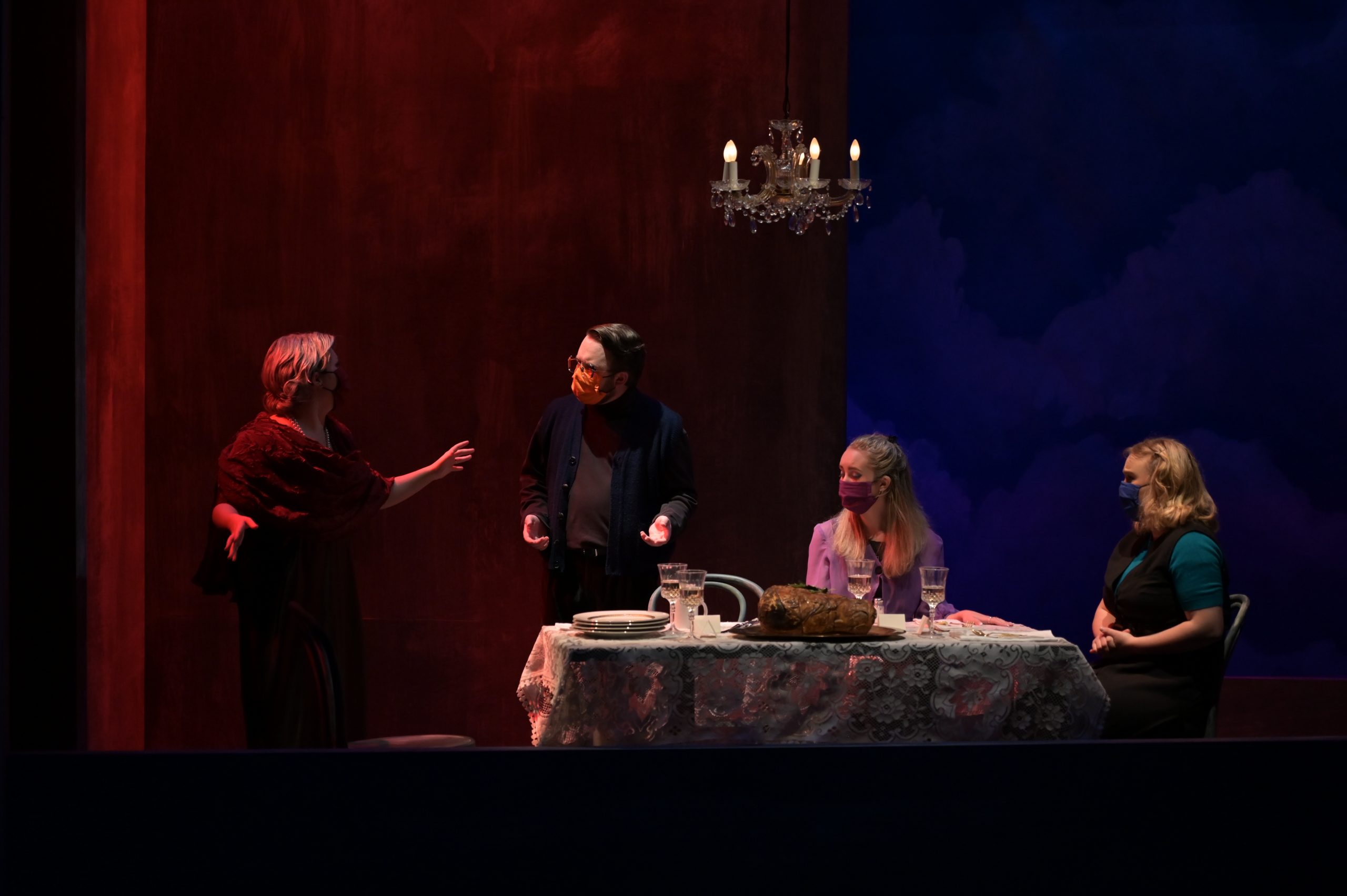 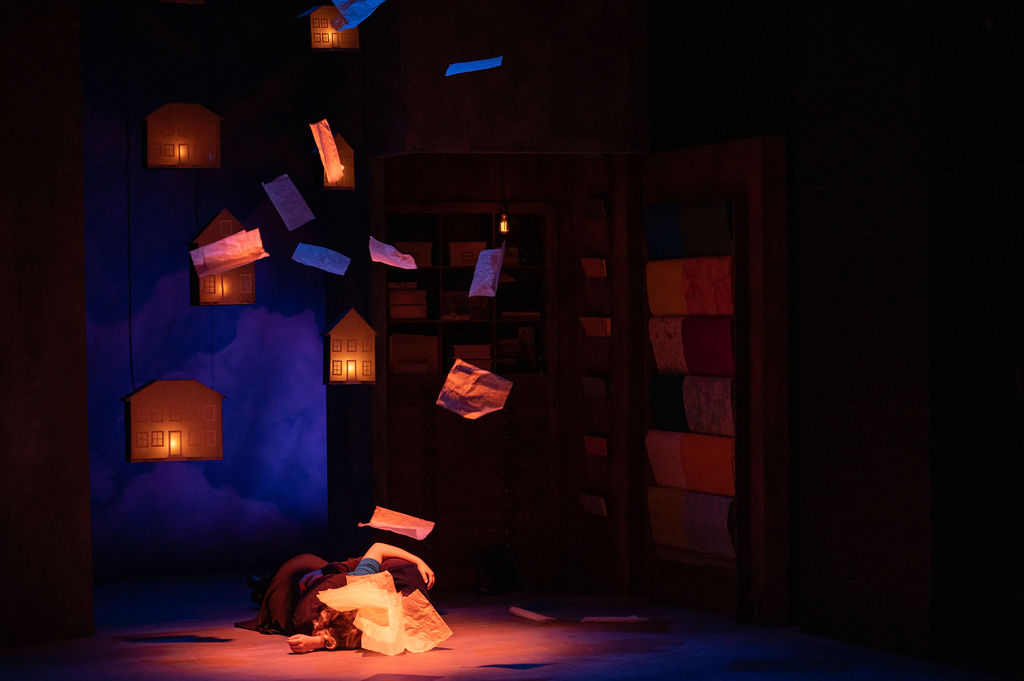 “Sarah Ruhl’s play captures those awkward and isolating feelings that we’ve all experienced over the last 20 months,” he muses. “But it also offers moments of pure whimsy that are honestly a lot of fun to design.”

Du Wors designed a version of Dead Man’s Cell Phone in 2012 for Persephone Theatre and this fall’s Phoenix production offered him a chance to revive his previous scenographic concept which was heavily influenced by the American realist painter Edward Hopper (1882- 1967).

Hopper’s paintings are actually referenced by the playwright in the script’s stage directions. With acclaimed paintings like Nighthawks, Automat and Office in a Small City (shown right), Hopper was known for his touching and subdued scenes of solitary moments in everyday life.

Stage directions are not usually heard by audiences, existing only as a written guide for actors and production team members about the action of the play in between the lines of dialogue. In the middle of Scene Five, Ruhl writes:

Director Fran Gebhard recalls poet and essayist Mark Strand’s perspective of Hopper’s work. “In Hopper’s paintings there is a lot of waiting going on…They are like characters whose parts have deserted them and now, trapped in the space of their waiting, must keep themselves company.”

Du Wors set out to capture the melancholic simplicity characteristic of Hopper’s works through the use of sombre greys and blues in his set design that—when illuminated by his accompanying lighting design—create a dramatic painterly effect. Oblique angles and window-like viewing spaces reference cafe spaces and street scenes and give the audience a sense that they are peering into the lives of those on stage.

Hopper’s influence permeates into the costumes, designed by fourth-year theatre student Parker Feenstra. She speaks candidly about how Hopper’s paintings informed her designs. “I was immediately drawn to his use of colour and the consistent tones that existed in his art,” she explains. “I used his palette as inspiration when creating the tones of the costumes, and I isolated certain colours for each character.”

With the Phoenix’s rendition of the show set in the early 2000s, the costume design features plenty of Mary Jane shoes, pantsuits, and corduroy—and yet, Feenstra’s attention to detail is evident in each of the 27 costume designs.  Jean, the principal character, sports a simple smock dress and soft, blonde curls, as though she leapt straight from Hopper’s canvas onto the stage.

Adding to these visuals on stage is the jazz-infused sound design of fourth-year student Miriam Dumitra which layers on early 20th-century music and film references that are sympathetic to the era of Hopper’s paintings. Audiences will pick up on notes from Film Noire classics and familiar jazz riffs. Miriam has also created the engaging soundscape of what Sarah Ruhl refers to in the script as a “Cell Phone Ballet”.

With all the elements of the production design of Dead Man’s Cell Phone in place, the cohesion of Du Wors and Feenstra’s designs becomes all the more evident. For months, the two diligent designers have pored over lighting plots and costume plates, and on opening night, their hard work came to fruition. For Feenstra, the feeling is nearly impossible to articulate: “Seeing your designs actually come to life onstage—it’s indescribable.”

Dead Man’s Cell Phone runs in-person from November 11-27, 2021 with four livestream performances. Tickets range from $16-30, with livestream options available for $15. Tickets can be purchased in-person at the Phoenix Theatre Box Office, or by phone at 250-721-8000.