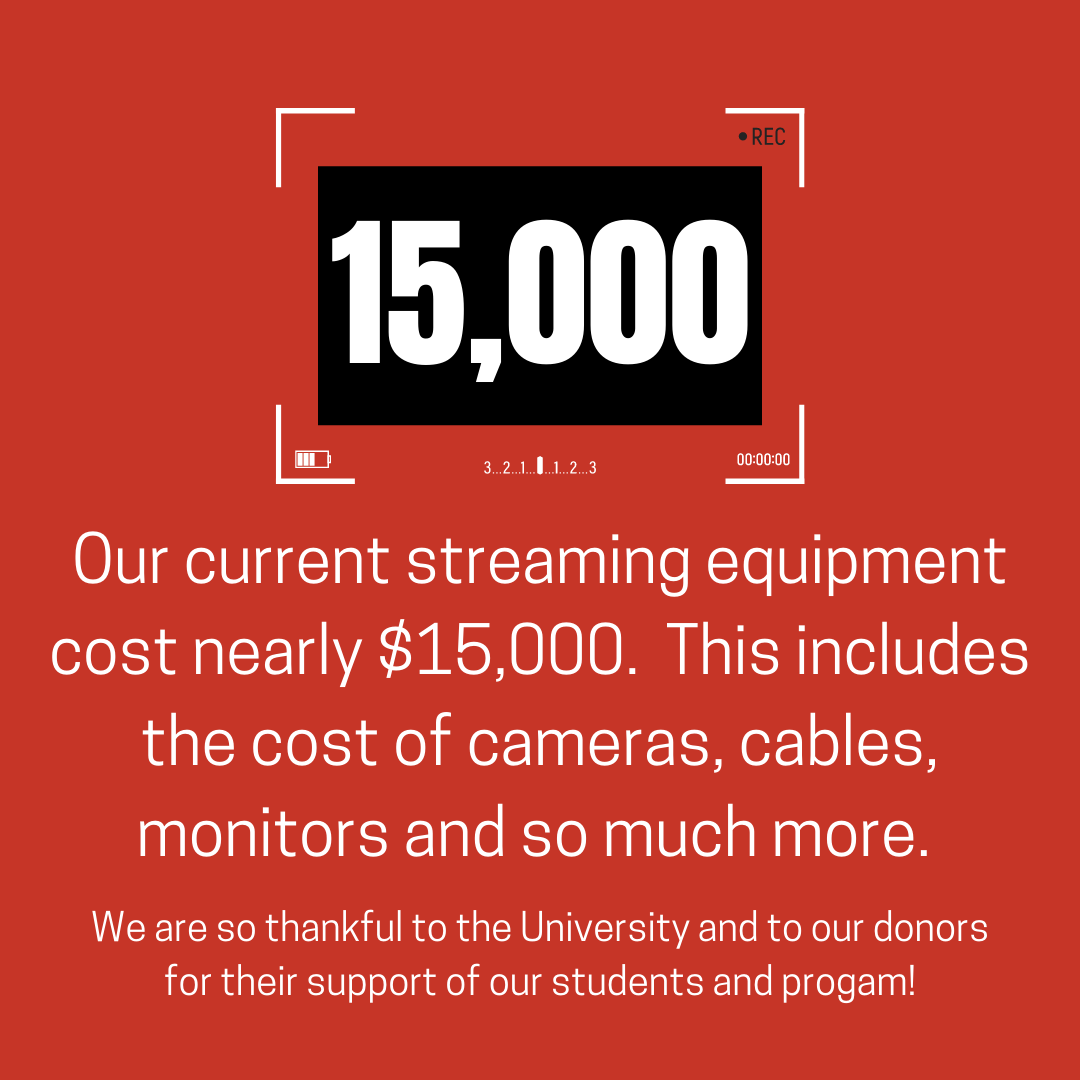 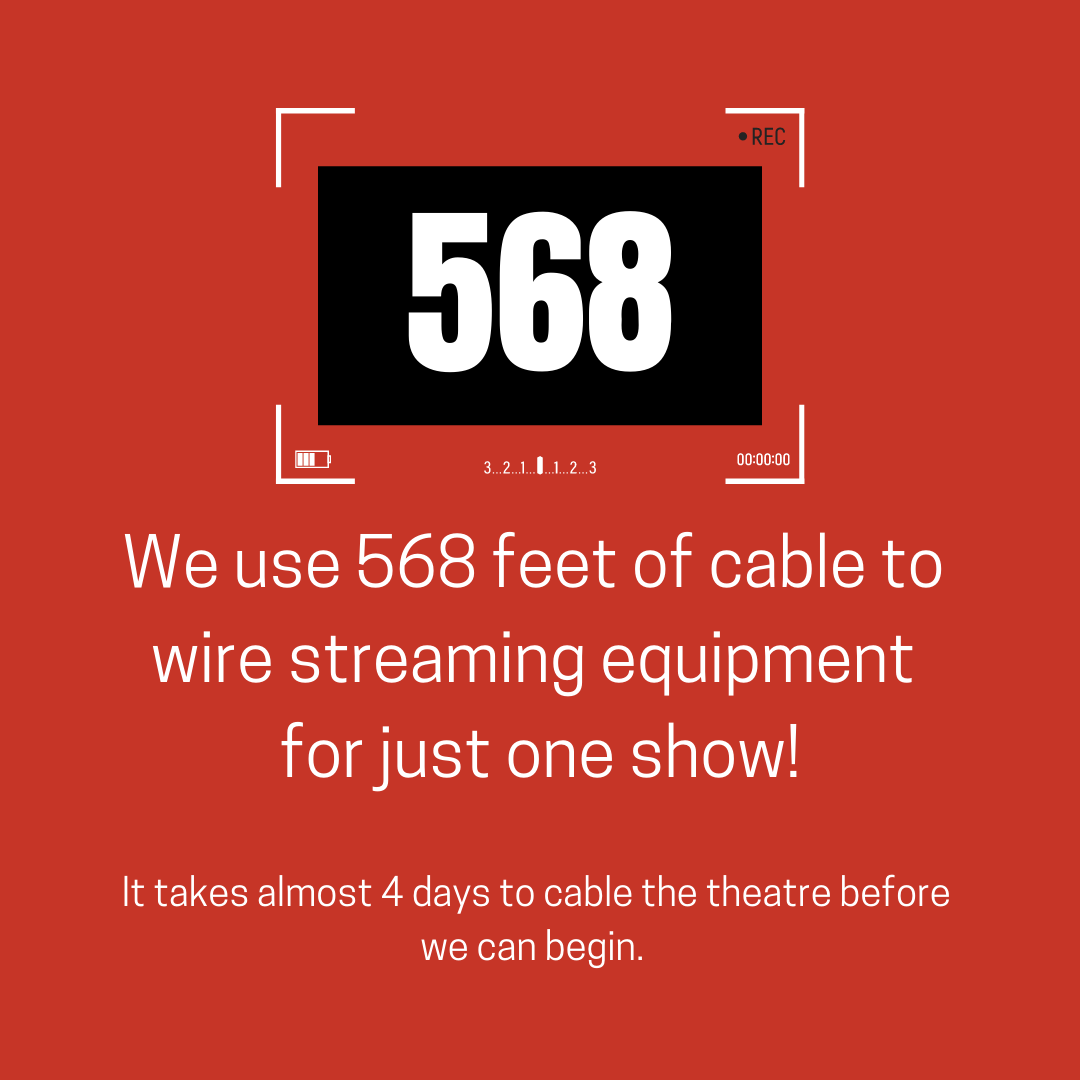 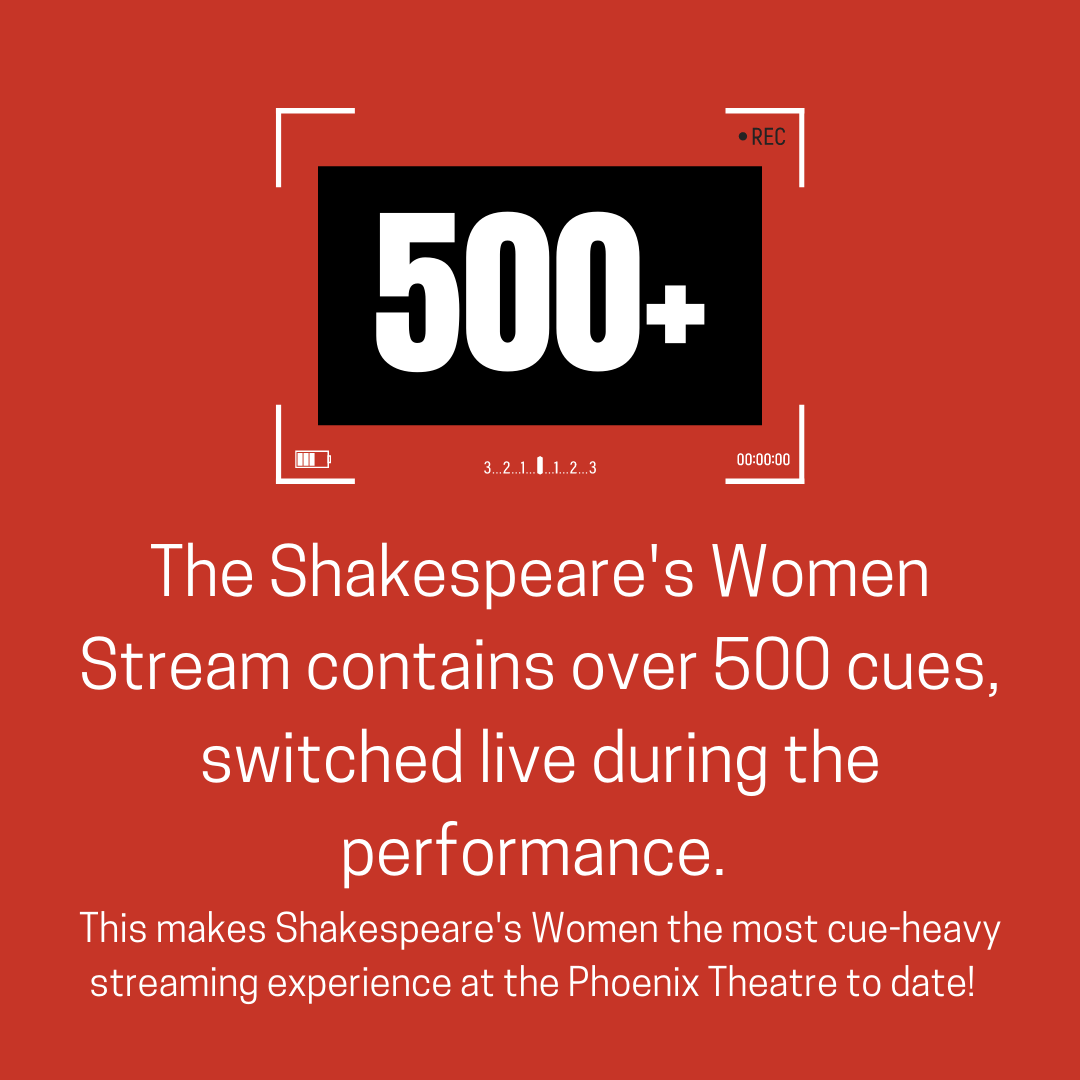 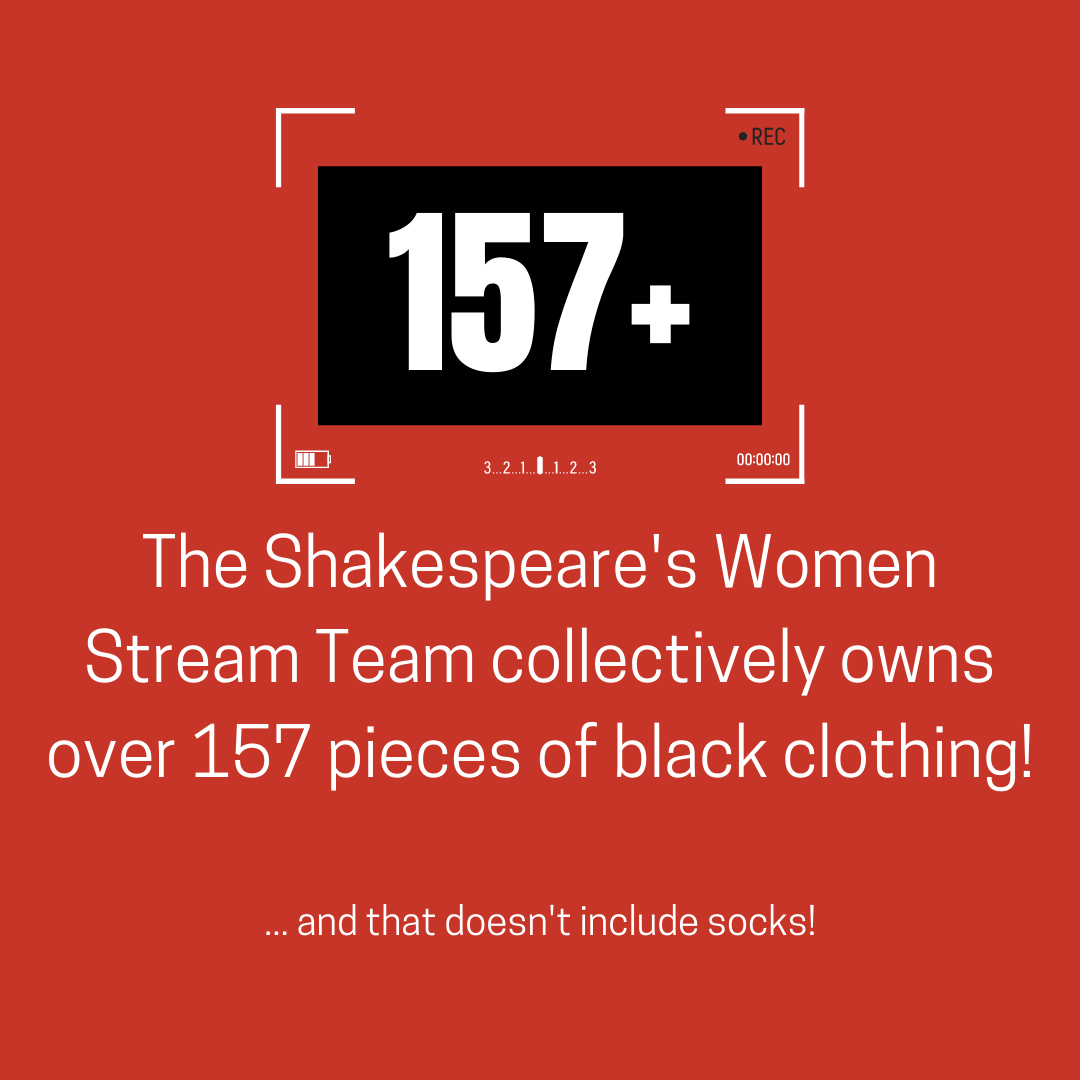 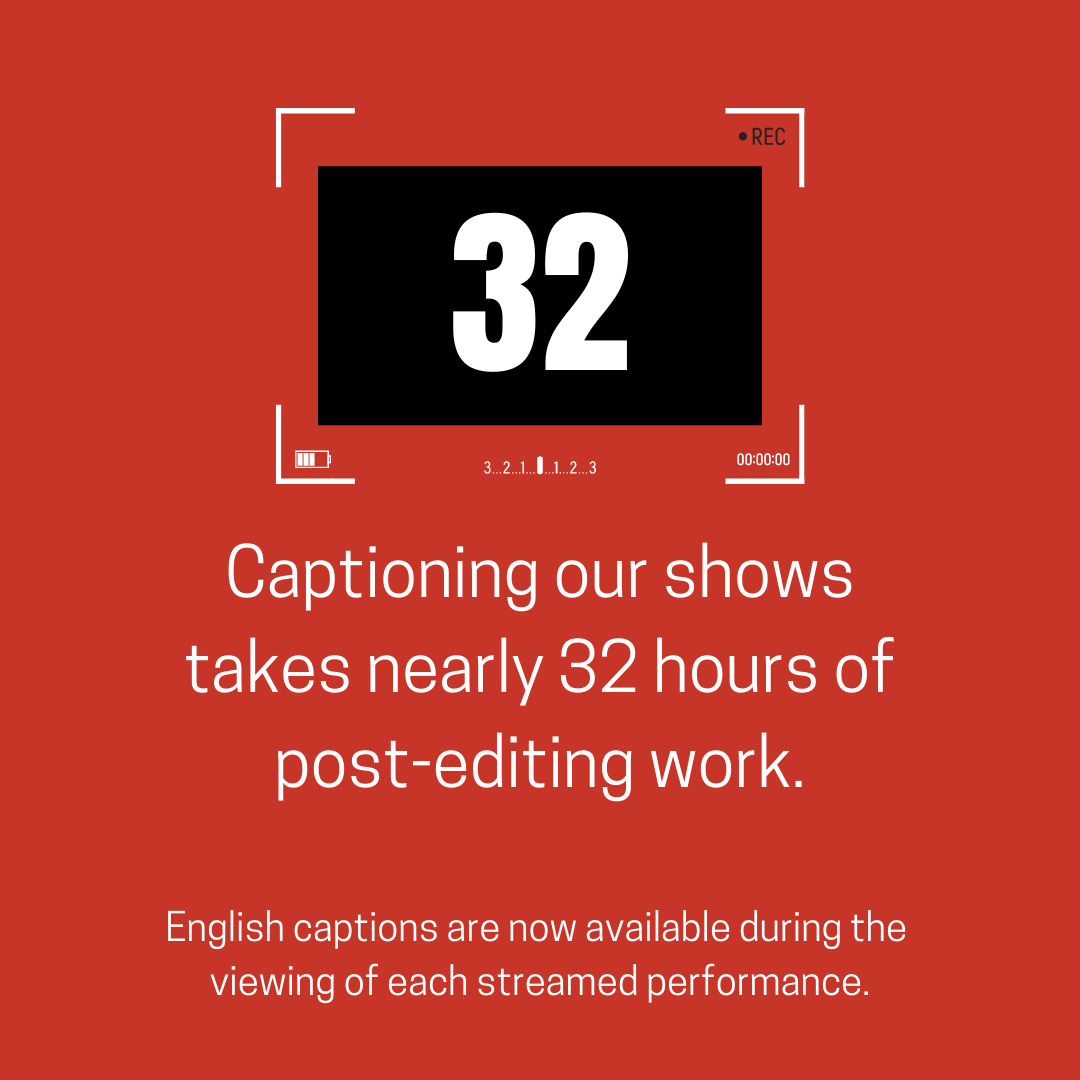 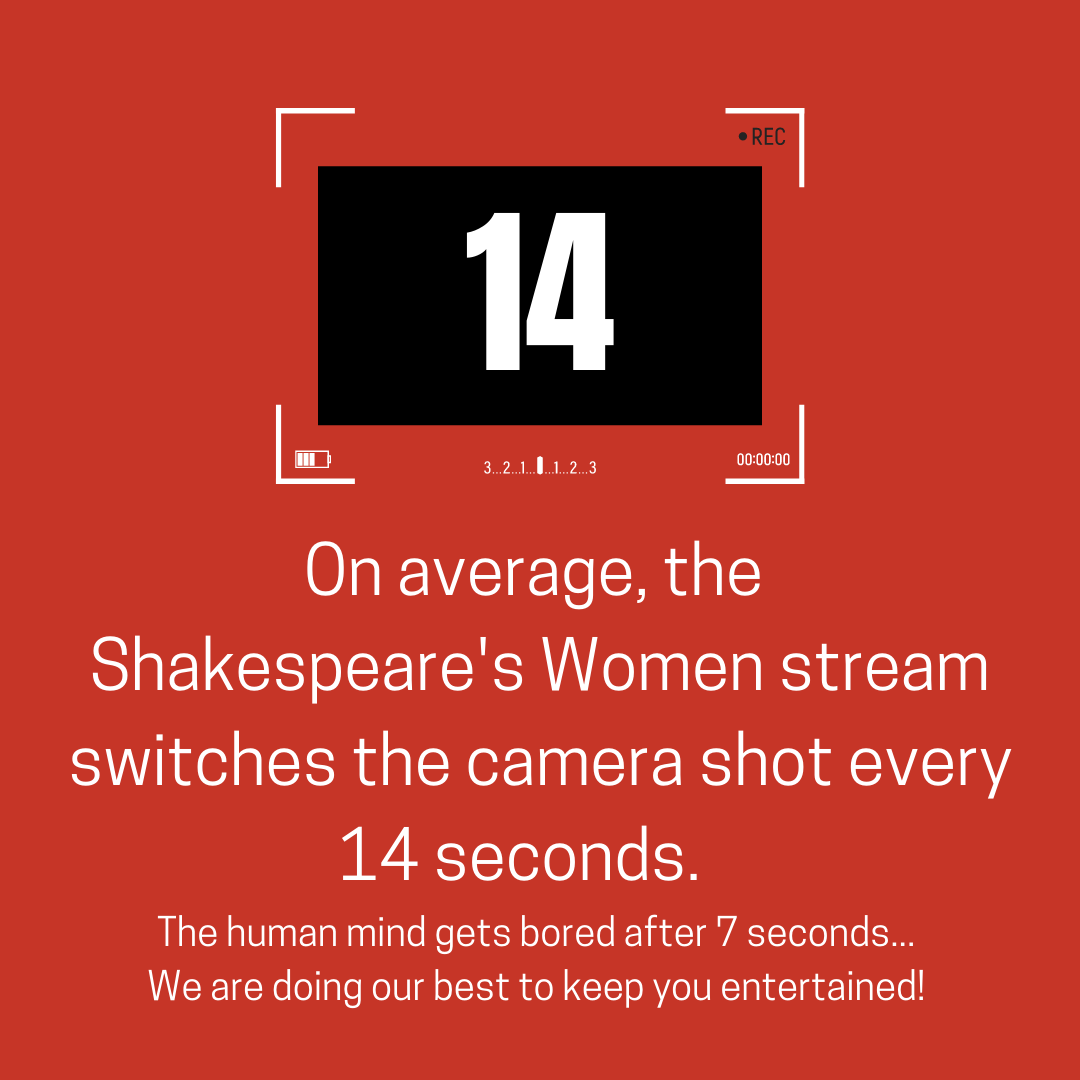 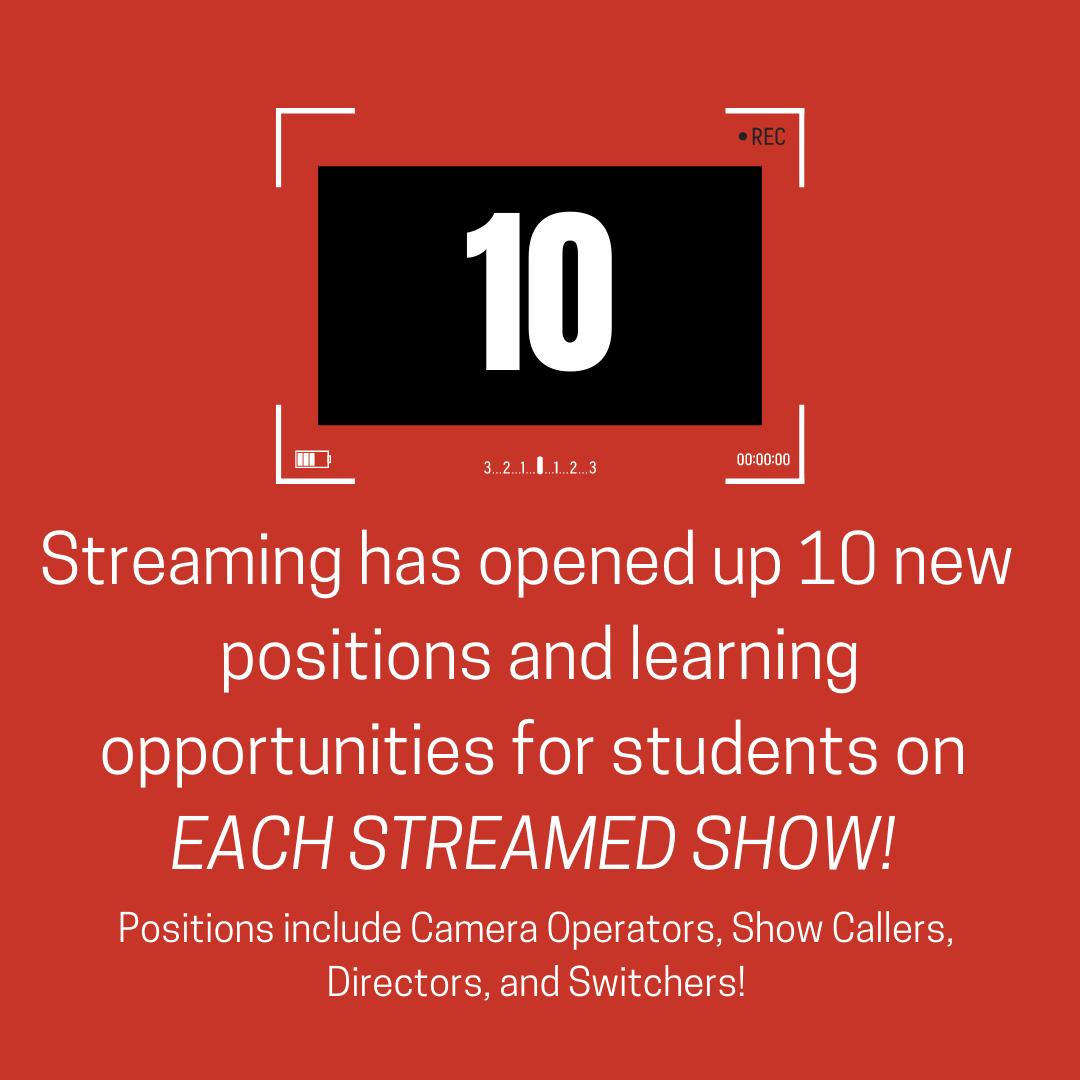 Streaming by the numbers. Click through for some fascinating facts!

A Look Inside the Shakespeare’s Women Streaming Process

With Sydney Hunt and Kevin Eastman

The organization of streaming our performances of Shakespeare’s Women in the Chief Dan George Theatre posed new and exciting challenges for our Streaming Director Sydney Hunt and Assistant Streaming Director Kevin Eastman. We sat down to talk to them about the inner workings of the streaming process at the Phoenix Theatre.

“Due to the orientation of the Chief Dan George as a thrust theatre, we realized we were inevitably going to capture some of the audience in the video. Over the past two seasons, the department had not attempted to stream in this theatre because of some of these complications,” commented Hunt. Her directing approach was to present the show not as simply “streamed theatre” but as its own entertainment experience.

“We embraced the idea of breaking down the pre-established conventions that we worked with when we filmed in the Roger Bishop Theatre, which has a proscenium arrangement,” said Eastman. “Once this was established, the space became far more useful, and a thousand times less daunting. The George Theatre allowed us new angles and great wide shots that created a “fishbowl” effect that conveyed the movement onstage with elegance.”

How did they achieve this effect? “Using three cameras–one located house right in the third row, two located opposite on house left, and the final camera up on the top of the vomitorium. These positions meant that the cameras were much closer to the performers than in the Roger Bishop Theatre, causing us to increase our camera cues by 200% as compared to our other streamed shows,” replied Eastman.

Sydney went on to explain, “Our team consisted of eight exceptionally talented students who worked alongside Kevin and myself. The team included four first-year camera operators, one third-year camera operator, one second-year Switcher, one third-year Technical Director and one fourth-year Show Caller. Our camera team became fluent in a language I developed specifically to capture movement in the Chief Dan George Theatre.”

Students learned the difference between a wide shot, a cowboy, a high stair, and over sixteen other different terms composed from film origins and used exclusively in our new space. Carson Schmidt was in the Switcher which was literally switching  which camera was recording or “live.” He would respond to the calls being made by our Show Caller Hannah Abbey and ensure that all manual fades and cuts were being made in the cleanest way possible. It was Hannah’s job to follow the action of the play from within the theatre space, and to call the camera cues when directed to do so. Hannah and Sydney worked to establish more than 500 cues over a two-week period or rehearsal, leading up to the filming of the play. Finally, there was the Technical Director Kornél Danis who worked with sound equipment to live mix the sound we picked up from the stage.

“In-house audio can be too quiet or too loud or it may not match with the action on stage, and his position made our post-process that much smoother. In addition, Kornél would come to the rescue should anything be quirky with our equipment,” added Sydney.

When asked if they had any other comments, Sydney replied, “I am so grateful to Kevin and to all our team members, this could have been an exceedingly difficult project, but working with this team has proven to be the highlight of my degree. I am so pleased to be able to highlight this work as the final mainstage of my degree and am so excited to see where the future takes each one of our team members.”

The Phoenix Theatre’s streamed performance of Shakespeare’s Women airs March 24 and 25 at 7pm and March 26 at 3pm. To purchase your access link, call us at 250-721-8000 or visit us in person at the Phoenix Box Office. Top: Fourth-year Stream Director Sydney Hunt. Sydney graduates this June with her BFA in Theatre, and is pursuing her Masters of Managment at UVic in the fall.

Bottom: Fourth-year Assistant Stream Director Kevin Eastman. Kevin is an acomplished performer and writer and is excited to graduate in spring 2023.