Fast-paced and full of eccentric characters, this dark comedy takes place on a seventh storey window ledge where a man is contemplating jumping. Endlessly interrupted by a variety of quirky building residents, he becomes drawn into the absurdity of their daily lives. So self-absorbed are his neighbours, that no one even bothers to ask why he’s out there! This quick-witted, sophisticated satire will have you philosophizing about life and death, right up to its existential conclusion. Written thirty years ago by the award-winning Canadian playwright Morris Panych, 7 Stories was the winner of six Jessie Awards, including Outstanding Original Play. 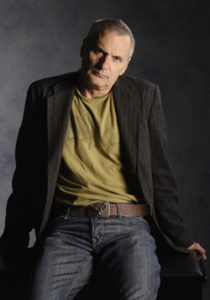 Playwright, actor, and director Morris Panych was born in 1952 in Calgary and grew up in Edmonton, Alberta. He received a diploma in Radio and Television Arts from the Northern Alberta Institute of Technology, and then studied creative writing at the University of British Columbia (BFA, 1977), and theatre at East 15 acting school in London, England. Panych has directed over ninety productions across Canada, and written thirty plays that have been produced throughout Canada, Britain, the United States, Europe, Asia, Australia, and New Zealand in a dozen languages. Panych came to public attention for his play Last Call: A Post-Nuclear Cabaret, which he wrote and starred in. The show was revised for CBC television, bringing Panych to national attention. His play Vigil (renamed Auntie & Me) premiered at the Belfry Theatre in 1995 and played in London’s West End in 2003 and in Paris in 2004 as well as in the US and in more than 30 Canadian cities. What many consider his first major play and one of his best, 7 Stories, was staged in Japan in 2003. In 1998, Panych co-created and directed The Overcoat, a physical theatre piece in which choreographed movement and music function in place of dialogue. This production toured across Canada. Panych also directed the television version of The Overcoat. His plays continue to receive international productions. 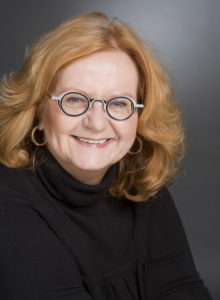 Fran acted in both theatre and film for many years before turning her attention to directing. She received her MFA in directing from UBC in 2001. For UVic she directed The School For Scandal, Crackpot, Wreckage, Midsummer Nights Dream, and Les Liaisons Dangereuses. Favourites for other theatres include As You Like It, For The Pleasure of Seeing Her Again, Much Ado About Nothing and The Importance of Being Earnest. Fran has had a long association with the development of new Canadian work, and served as the Program Head of the Playwrights Colony at the Banff Centre for many years. Acting is Fran’s first love and her most memorable roles include: Brutus in Julius Caesar, Lady Wishfort in The Way of the World, Elizabeth in Richard III, Joanne in Norm Foster’s Jupiter in July, and Martha in Joan MacLeod’s Amigo’s Blue Guitar. She regularly performs her one-woman show Looking For Kitty and has hosted her own radio and TV talk shows. Film and TV credits include appearances on The Chris Isaak Show, Stephen King’s Dead Zone, Friday’s Curse and Moment of Truth. She played Bette Davis’ daughter-in-law in A Piano For Mrs. Cimino and was nominated for a Genie award for her work in Blue City Slammers. Fran also performed in As You Like It and The Fantasticks during Blue Bridge Repertory Theatre’s inaugural season. Teaching has become a focus in Fran’s life – she loves sharing her passion for theatre with the next generation of talented and energetic theatre professionals.

This Friday night lecture was recorded so if you missed it, click below to listen in on the conversation. 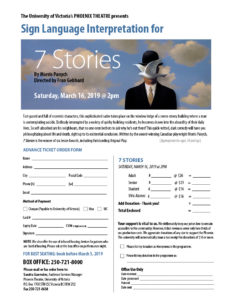 The Saturday 2pm matinee on March 16 will include sign language interpretation for Deaf and Hard of Hearing community. For the best seating to view our interpreter, please book as early as possible using the Advance Ticket Order Form. 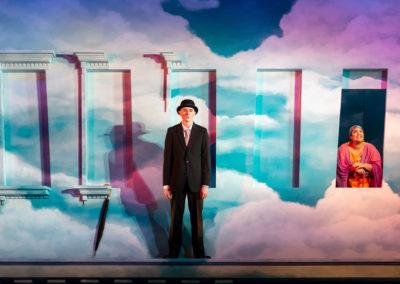 As the sun starts to go down, the 100-year old​ Lillian (Rahat Saini) admires the beautiful evening, while The Man (Lyle Hendriks) is lost in his own troubling thoughts. 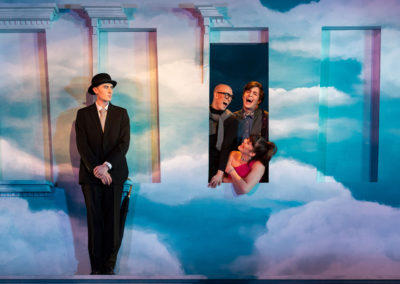 Coming out for fresh air from the party inside (left to right) Percy (Sivert Das), Al (Daniel Handford) and Jennifer (Emily Hay) share a laugh – but The Man (Lyle Hendriks) doesn’t get what’s so funny. 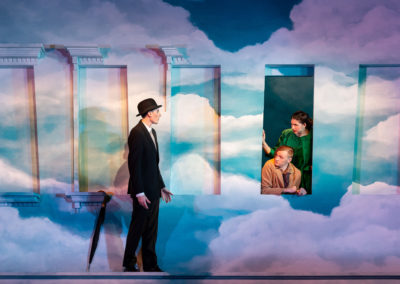 The Man (Lyle Hendriks) tries to defend himself from the fashion critique by Joan (Natalie Lichtenwald) and her designer Michael (Aaron Smail) but no one asks him why he’s out on their seventh-storey window ledge. 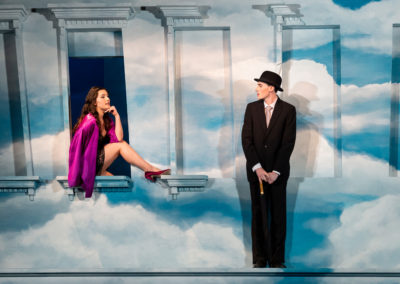 Charlotte and The Man

Charlotte (Taryn Yoneda) and The Man (Lyle Hendriks) talk about her affair with Rodney while perched high up on a seventh storey window ledge. 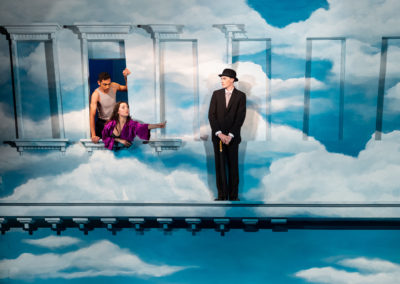 In one of their regular spats, Charlotte (Taryn Yoneda) threatens to throw her lover Rodney (Tallas Munro)’s wallet and a photo of his wife off the seventh storey of the building, while The Man (Lyle Hendriks) watches in confusion. 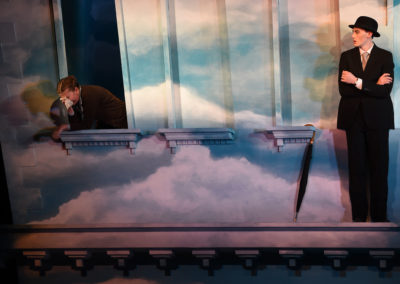 The Man (Lyle Hendriks) is surprised to hear the sad tale of Rachel’s (Sadie Tims) life. 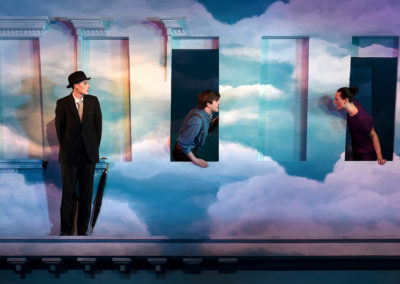 Turn the music down!

Wilson (Alexander Moorman) yells at his neighbour Al (Daniel Handford) to turn down the music at his party as The Man (Lyle Hendriks) watches the disagreement. 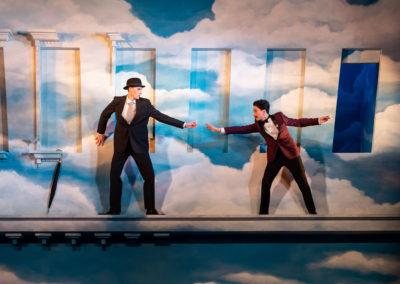 A half an hour before his marriage ceremony, Marshall (Douglas Peerless) smokes the final cigarette of his life out on the seventh storey-building ledge and passes a smoke to The Man (Lyle Hendriks). 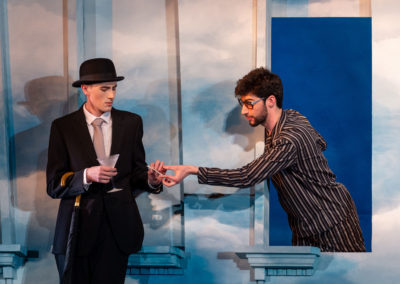 Not having slept in three years, Leonard shares his paranoia about his neighbours – and just about everyone else – with The Man (Lyle Hendriks) on the seventh storey building ledge and offers him a business card. 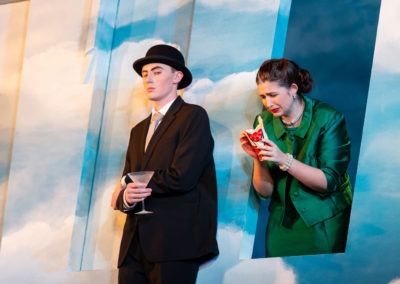 Joan (Natalie Lichtenwald) sheds a few tears over a broken family heirloom unaware that The Man (Lyle Hendriks) is just outside her window on the seventh-storey building ledge. 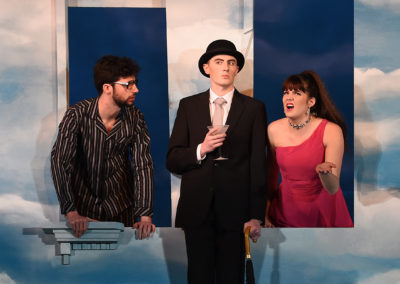 Not trusting anyone, Leonard (Aidan Guerreiro) tells The Man (Lyle Hendriks) not to mention their conversation to his neighbour Jennifer (Emily Hay). 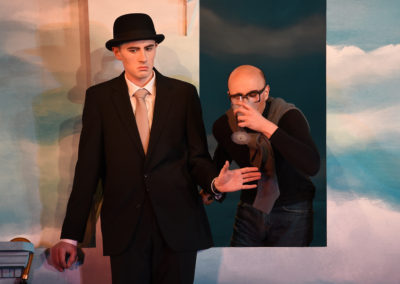 Where did you get that drink?