By Bertolt Brecht with music by Kurt Weill

Part biting satire and part sheer theatrical innovation, this musical satire by Bertolt Brecht and Kurt Weill is a landmark of modern theatre. Borrowing from the 18th-century The Beggar’s Opera, Brecht takes aim at the traditional bourgeoisie, revealing a society where law is fickle, money corrupts, and crime pays. Set by the director into an absurd, near-future dystopia, it follows the villainous but irresistible Mack the Knife (and his marauding thieves) as he marries the innocent Polly Peachum – much to the displeasure of her parents – all while continuing his relationship with his mistress Jenny. 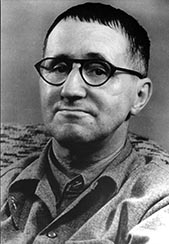 Bertolt Brecht (1898 – 1956) is one of the towering figures of 20th-century theatre. The playwright of over 50 plays, Brecht’s theories on acting, direction, play-production and dramaturgy have inspired and galvanized artists across disciplines around the world.

Born in Augsburg, Germany, Brecht studied philosophy and medicine at the University of Munich before serving as a medical orderly during the First World War. His experiences in a military hospital crystalized what would become a life-long adherence to Marxism. He returned to his medical studies after the war but eventually transitioned into the world of literature. His earliest plays included Baal (1922), Drums in the Night (1923), and Man Equals Man (1926). In 1933, Brecht was forced into exile by the Nazis and settled in the United States. During this time, he wrote many seminal works that are performed to this day, including Life of Galileo (1939), Mother Courage and Her Children (1939), The Good Person of Szechuan (in collaboration with Margarete Steffin and Ruth Berlau, 1941) and the Caucasian Chalk Circle (1943).

In addition to writing and rewriting classic plays from a Marxist perspective, Brecht reinterpreted the practice of theatre itself. He analyzed every facet of the art form, from the behavior of actors to the expectations of the audience, from the way in which lights, music, text, and imagery are used, to the nature of theatrical storytelling. Writing at a time when Nazis were using powerfully emotional spectacles for fascist propaganda, Brecht urged theatre artists to use techniques that would help their audiences to think about what they were seeing, even when absorbed by the story.

In 1949 he founded the Berliner Ensemble with his wife Helene Weigel, a performer who had helped Brecht to grasp the political potential of his work. Although Brecht passed away over half a century ago, the Berliner Ensemble remains one of the world’s leading theatre companies to this day. 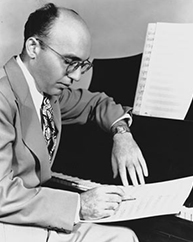 Kurt Weill (1900-1950) had a career that ranged from classical composition to Hollywood movies, from Broadway to Brecht. His musical talent was evident from an early age; when he was twelve, he was already writing and composing concerts and dramatic works for stage and at 15, he composed a four-part chorale for his sister’s confirmation.

Weill’s first collaboration with Bertolt Brecht was the 1927 singspiel Mahagonny, after which they collaborated on Die Dreigroschenoperor The Threepenny Opera. Mahagonny is remembered as one of Weill’s great masterpieces, synthesizing popular music, ragtime, and jazz.

Weill was married twice, both times to Lotte Lenya, a German actor/singer who is widely remembered as one of the greatest performers of his and Bertolt Brecht’s work. She sang in productions of both works and was the first actor to play Jenny in the The Threepenny Opera. Weill and Lenya met in 1924, married in 1926, and finalized their divorce in 1933 after a period of estrangement. He fled from Germany during the rise of the Nazi Party in 1933, spending time in Paris and London, where he found modest success, before he moving to New York. Here he reunited with Lenya and they remarried in 1937.

In 1936, Weill was introduced to Group Theatre in New York, which would produce much of his work over the years. He composed the scores for multiple musicals on Broadway and for several Hollywood films. He worked with Lenya on many projects, and began to collaborate with Brecht once more. Sadly, their new efforts together never bore fruit, and none of this music survived.

Weill would spend the rest of his life in New York with Lenya – aside from brief stints in Hollywood, where he felt he was stifled artistically.  In 1947, Weill received the very first Tony award during the inaugural ceremony in recognition of his musical contributions, and specifically for the score of Street Scene.  In 1950, Weill had begun work with Maxwell Anderson to create a musical adaptation of The Adventures of Huckleberry Finn. Unfortunately, this adaptation was never finished as Weill suffered a heart attack and shortly after passed away.

NOTE: There will be two intermissions during the play

Missed the preshow lecture? Click below to listen online to faculty member and director Brian Richmond talk about the steps he went through as a director to come up his vision for The Threepenny Opera.

Advisory: Coarse language. Recommended for ages 16 and up. 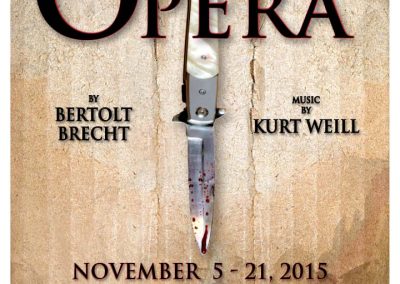 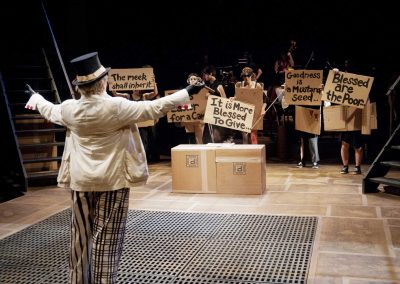 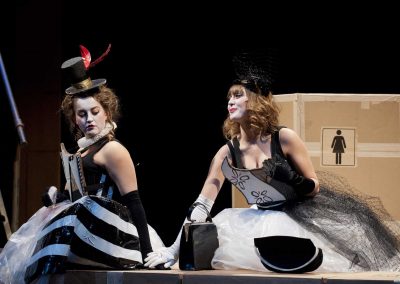 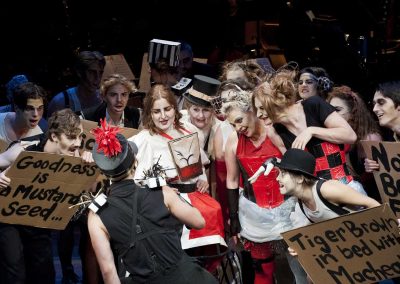 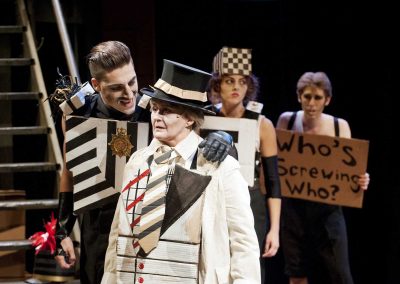 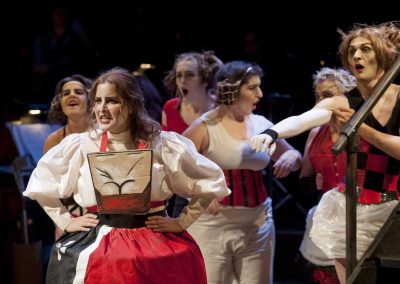 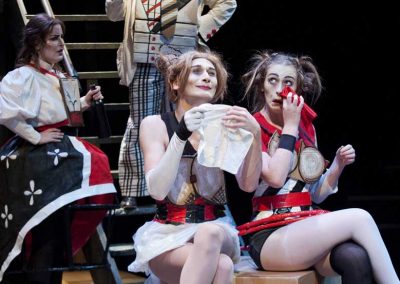 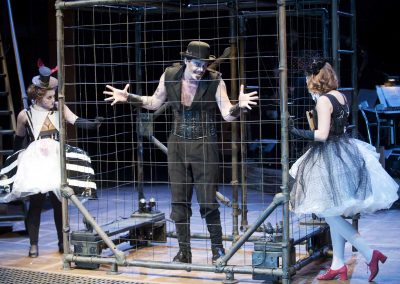 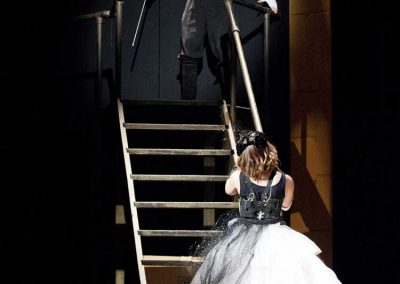 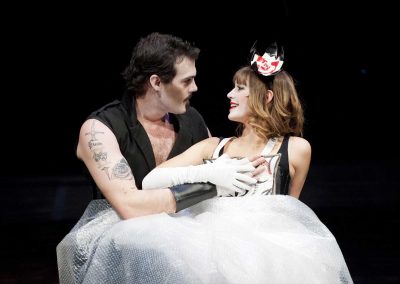 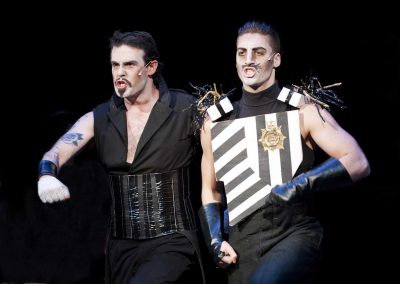 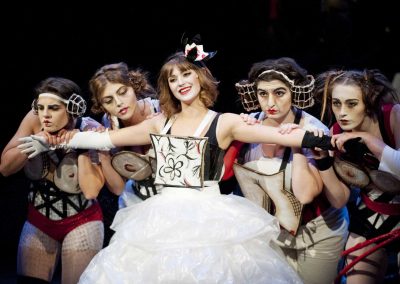 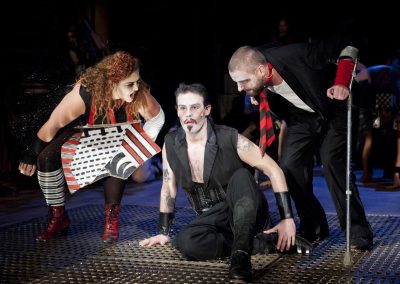 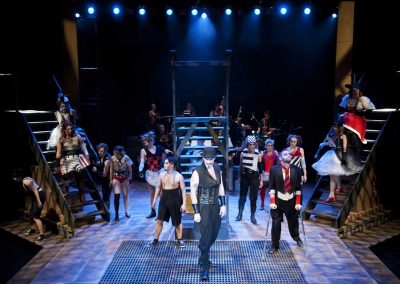 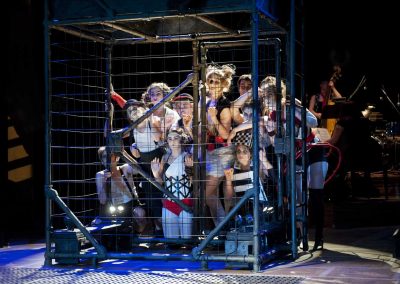 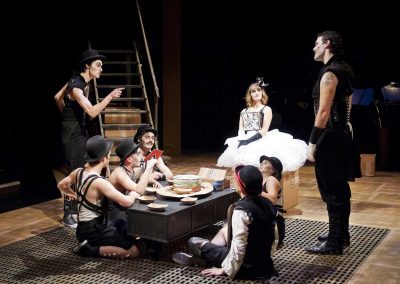