“A live cartoon for lovers and for dreamers; that is, for everyone. I’d give it more than five stars – I’d give it the moon.” – CBC

LOON is a love story that whisks a man to the moon and back. Francis is a lonely janitor who is plagued by isolation and tickled by whispers of childhood imagination. He has hit rock bottom and discovers that he has nowhere to go…but up. And up. And up! But will plucking the moon from the sky bring him the love he is searching for? Wordless and whimsical, LOON is brought to you by the acclaimed mask imagineers and physical theatre company whose work has been described as watching a living cartoon. It’s a beautifully surprising mix of physical theatre, comedy and pathos and a love story the likes of which you’ve never seen.

Subscriptions for 3 or 4-show packages are available now.

The Heads are Kate Braidwood and Andrew Phoenix, who came together in 2009 resolved to do their part in conjuring a little magic and wonder into the world.  Armed with their respective careers in the professional theatre, a shared background in the most curious of MFA degrees (Ensemble Based Physical Theatre, Dell’Arte International) and a mutual proclivity for all things bizarre and extraordinary, they set out to create Grim and Fischer: a deathly comedy in full-face mask.  This, the story of a feisty grandmother who battles it out with the Grim Reaper himself, has been busy touring the US and Canada and was the recipient of five Best of Fest awards in 2011 and the League of Cincinnati Theatres Award for Outstanding Production in 2012.  Having explored death, the Heads wanted to balance the scales and tackle Love, and in 2011 created their second show: LOON, the story of a man who falls in love with the moon.  LOON was awarded three Best of Fest awards in 2012 as well as the 2012 Edmonton Critics Choice Award, and three 2013 Orlando Critics’ Choice Awards (Best Show, Best Original Work, Best Female Performance).  In March of 2013 the WONDERHEADS were selected as one of ten Scion Motivate finalists, a national contest recognizing young entrepreneurs in the creative arts, and soon thereafter used their prize (a sparkling new Scion xB) to propel them along their second Canadian national tour of Grim and Fischer.  In early 2014 the existing Heads welcomed a new Head, Emily Windler, to the creative team and together they created their newest show The Middle of Everywhere, a comedy-adventure exploring what it means to live life it its fullest (and to travel through time and space).  The Middle of Everywhere premiered in Portland OR in June 2014 and then embarked on a cross-Canada summer tour during which it was awarded Best of Fest in Saskatoon, SK as well as the Favorite Visual Theatre/Puppetry Award in Victoria, BC.

The WONDERHEADS are based in Portland, OR.

For more information about WONDERHEADS, please visit www.wonderheads.com, and for the most up to date inside scoop, follow them on Facebook: www.facebook.com/wonderheads.

Kate Braidwood (Cast, Deviser, Mask and Sound Designer)
Kate Braidwood, WONDERHEADS Co-Founding ‘Head’, is an actor, deviser, sound designer, director and teacher.  She is also a professional mask maker, responsible for the big heads used in WONDERHEADS’ work and whose masks are used on stages, in films and in classrooms around the world.  As an actor she has performed nationally and internationally, including credits with Miracle Theatre (Portland OR), Theatre SKAM (Victoria BC), The Dell’Arte Company (Blue Lake, CA), Furano Natural Studio (Japan), and Four on the Floor (Arcata, CA).  Kate is a graduate of the University of Victoria with a BFA in Acting and she earned her MFA in Ensemble Based Physical Theatre from Dell’Arte International School of Physical Theatre, where she trained as an actor-creator, studying the development of original, physically driven work in ensemble.  It was at Dell’Arte that her passion for mask was truly ignited and developed, during which time she trained in the Italian form of Commedia Dell’Arte, studied mask performance with Joan Schirle and Ronlin Foreman, studied mask design with Bruce Marrs and worked with Berlin-based mask company Familie Flöz.  In 2009 she teamed up with fellow Dell’Arte graduate, Andrew Phoenix, to create the WONDERHEADS and has been busy touring their work since that time.

Andrew Phoenix (Deviser, Director, Set Designer)
Andrew Phoenix, WONDERHEADS Co-Founding ‘Head’, is an actor, deviser, director and teacher.  He completed his BFA in Acting at Texas State University and worked with Dallas Children’s Theatre, Appel Farm Arts and Music Center in New Jersey, and the Texas Shakespeare Festival.  Driven by a longing to create original and innovative work on his feet and away from the page, Andrew completed his MFA degree in Ensemble Based Physical Theatre at Dell’Arte International and went on to perform and teach in India with Clowns without Borders U.S.A., direct and teach at Intiman Theatre (Seattle, WA), and perform with the Dell’Arte Company (Blue Lake, CA) and Miracle Theatre (Portland, OR), where he also served as Technical Director and Master Carpenter.  In 2009 he joined forces with Kate Braidwood to create their first show, Grim and Fischer, and the WONDERHEADS were born.  They have since toured their work throughout North America, moved to Portland OR, gotten married, and have yet to land a role on Portlandia.

Back in 2009 when Andrew and I came together to create our first show, Grim and Fischer, we had no idea the journey we were about to embark on.  We were two friends making a show in a tiny San Francisco living room, scheduling rehearsals between part time jobs and bumping into the walls with big masks on our heads. We made a show about death, and we also happened to fall in love. So while we toured Grim and Fischer and became the WONDERHEADS, we also became married.  In 2011 we wanted to create another show together, and we thought it fitting that it be about Love – and that’s where LOON began.  You could say that LOON turned out to be more of a melancholic look at Love than our own experience together, but oftentimes when we create, all kinds of things that we ourselves have dealt with in the past or are still processing sneak into the narrative.  So as much as LOON is about love, it’s also very much about letting go. When we are faced with loss – the death of a loved one, the end of a relationship or a meaningful experience – the sense of loss can be overwhelming.  But  we can find solace in how that person or experience helped shape who we are, and how we keep them in our hearts as we move on.  So we hope you enjoy LOON, this strange love story between a man and the moon.
–Kate Braidwood

Recommended for ages 8 and up. 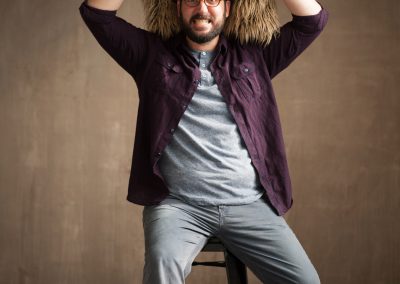 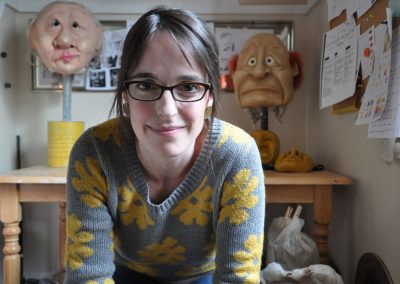 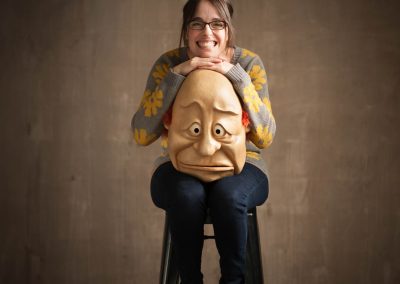 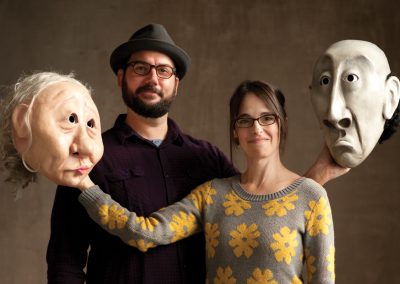 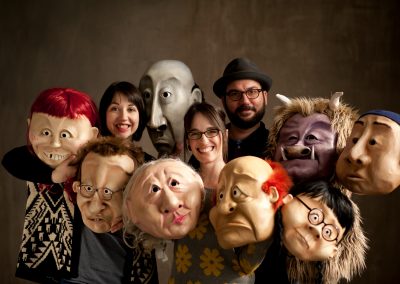