Based on the 1958 killing spree by Charlie Starkweather and Caril Ann Fugate that shook America to its moral core, OBIE Award-winning, New York playwright, Kyle Jarrow’s critically acclaimed rock musical and psychological drama brings us inside the jail and inside the heads of two teenage lovers accused of murder. When interrogated by the town sheriff and his wife, facts blur and loyalties shift as the teenage lovers are pressured to confess before dawn. Advisory: Partial nudity, mature subject matter and strong language.

“… a compelling and entertaining production. Jarrow forces us to consider that spree killers are people too… he merely advocates for humaneness and open-mindedness. And that’s never a bad thing.”
Times Colonist

“Love Kills… and it rocks too!” “Go see it; you may not come out humming, but you certainly won’t be disappointed.” Monday Magazine (Top Pick, Nominated for M Award for Best Musical)

LISTEN NOW! Pre-Show Lecture:
“Art and Violence”
Professor Emeritus Alan Hughes spoke about our cluture’s fascination with stories of violence — both as an inspiration for art and those times when life imitates art. Recorded on October 14. 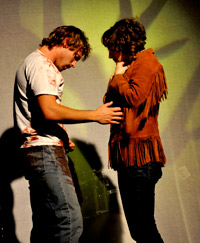 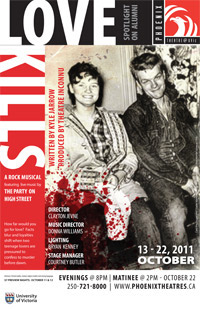 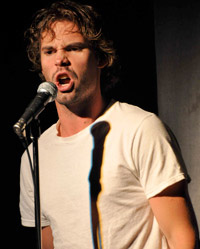