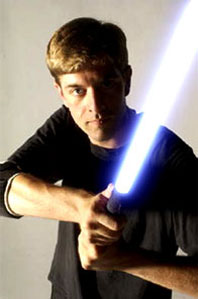 Each year, the Department of Theatre celebrates the achievements of former students who have stepped out into the world of professional theatre. This season, the Spotlight on Alumni shines on two rising stars, Charles Ross and TJ Dawe.

One-Man Star Wars Trilogy
Charles Ross performs all the favourite Star Wars characters including Luke Skywalker, Princess Leia, C3PO, Chewbacca and R2D2 in a tour-de-force performance that has enthralled audiences across North America including a five-month run off-Broadway. The show is directed by acclaimed performer and director, TJ Dawe, who inaugurated the “Spotlight on Alumni” in 2003 with his one-man show, The Slip-knot.

Following the performances, audience members have the opportunity to return to the theatre after a short intermission for a presentation and talk-back with Charles as he discusses his career and his travels thus far.