Written and directed by Amiel Gladstone, this new comic drama by Theatre SKAM flashes back to a 1970’s commune in Vancouver where three young people are forced to confront the differences in themselves and a fast changing world.  Theatre SKAM, founded by UVic Theatre graduates in 1995, has made headlines recently across the country with the outdoor smash hit Lt. Nun.

“Gladstone, who also directs this 75 minute play at the University of Victoria, has created some believable dialogue that’s clever and often quite funny.”

“The show’s retro-patchouli vibe is underscored by a deftly chosen colour scheme for set and costumes, with brown and orange predominating.  Somehow, this combination brings back the era of incense, pottery and macramé—at least for those who lived through it.”

“Go, even if its just so you can say you knew her when.  I really hope this piece gets expanded and remounted in the future.  Please leave your bellbottoms at home.”

“Now, there’s no doubt Gladstone is a talented writer, as anyone who saw The Black Box can clearly attest.  But with Hippies, he seems to have put more thought into his role as director; indeed, the best scenes are the ones without any dialogue, where he allows silence and action to fill in the meaning—unspoken tension over a bowl of granola, for instance, or the simple action of opening a pile of umbrellas.”

“When the Zeppelin fades out and the lights come up, your mind won’t be blown and your consciousness won’t be expanded, but you might just smile and say, “That was nice.”
And I’m sure most of us can dig that groovy vibe, man.” 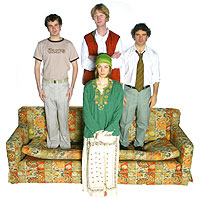 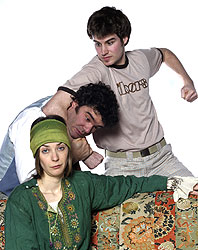