A new play by Sally Clark

Written by one of Canada’s most renowned playwrights, author of Moo and Saint Frances of Hollywood, Sally Clark puts a fascinating spin on our ideology of the north.  A story of challenge, survival, love and revenge during the Klondike gold rush.

“Only the second time it’s been produced, it seems the real star in Wanted (as with many Phoenix productions) is the design work.  While Bates and Taylor do their level best to live up to the scripts hopefully intentional melodrama, only Ward succeeds in capturing the necessary combination of desperation and charm needed to believe these characters… although Mike Klemak and John Ellingson provide some fine comic support as a pair of starving miners.  Would that the cast in general had shown the versatility of Brian Perchaluk’s boardwalk-and-timber set, which doubled as everything from the doomed riverboat to the northern woods, a saloon, and a mine shaft.  Also well worth noting are Janis Ward’s costumes, William Mackwood’s evocative lighting design and Avery Brown’s haunting piano accompaniment.”

“Clark specifically notes that since so many of the men and women who made the trip to the Yukon were in their twenties, consequently she really enjoyed watching such a young cast.  I agree with her—for the most part.  There’s a couple of uncanny photographs in the lobby, comparing an actual group of miners with the young men of the cast.  It’s hard to look at the weather and care worn faces and haunted eyes of these desperate men (the prospectors, not the actors—though, give ‘em a few years of hitting the audition trail and they’ll look haunted too) and realize how young they all were—at least when they set out.”

“This is K. Scott Malcolm’s [Phoenix] directorial debut and he has a good, solid cast to work with.  Bates’ performance was particularly good in expanding Joe’s character from the hostile, gold-hungry prospector to the older brother that Jack loves and admires despite his deep flaws.
The performance of light-hearted Jack, by Ward, was an effective foil which never felt one dimensional.
The character of Mary was thoughtfully portrayed by Taylor.  She gave a convincing depiction of a woman who discovers her sexuality as a way to achieve economic stability but sacrifices her own happiness.”

“Those of us raised in Canada may get ugly flashbacks of Grade 10 Social Studies when we hear the words “Klondike Gold Rush.”  Given the subject matter, “Wanted” had the potential to be dry.  Before it started I pictured myself furiously scribbling notes on the history of the Yukon while trying to keep up with names and dates—but this play wasn’t like that at all.  With colorful costumes, plenty of humor, and some great singing and dancing from the girls of Pete’s Place, “Wanted” entertains with the best of ‘em.”

“Wanted has the potential to embrace transcendent themes and truly achieve its primary goal; that is, to function as an investigation of the darkness that greed and desperation can foster.  To this end, I think the hangman’s show could be explored much more thoroughly.  This seems like a script that needs rethinking, or at least editing.  The production’s greatest asset is piano player Avery Brown, who with unerring grace and technical skill plays period and incidental music.” 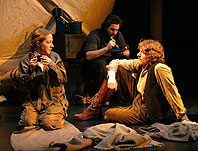 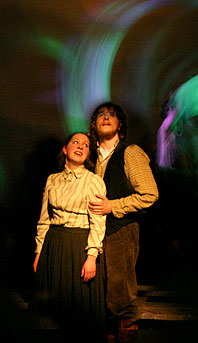 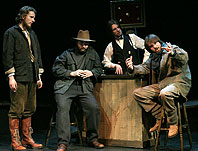 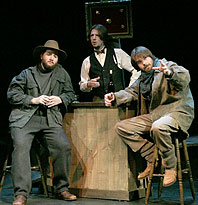 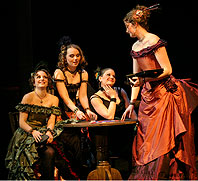 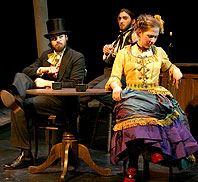