The play toys intellectually with the concept of time running on a perpetual loop-de-loop of emotions, selective memories and guilt.  The play has existential resonance, fantastic sexual frissons and a shattered mirror Groundhog Day structure added with a dollop of mystery.  Paulino Nunes explored role playing in relationships to good theatrical effect as he investigates the power of first love, sexual honesty and commitment.

“What begins as a fairly straightforward exploration of the motivations behind one man’s sexual desire is soon sucked into a black hole of time and memory, where demanding urges battle with the need of absolution in the limbo of a hotel room.  While somewhat repetitive—the audience witnesses the same scene played out a number of times, with only minor changes—Rodeo Star was chock full of contemporary references, crackling dialogue and utterly believable pre-and post-coital sexual tension.  …  David Ferry’s tight direction kept things moving at a brisk pace, and the use of a revolve in the hotel room (which spun the bed around the stage much like the hands of a clock) livened up what could have been a static set design by Kimberly DeLude and AllanStichbury.”

“Nunes is aided in no small part by a fine cast.  Trevor Hinton gives a taut, antsy performance as the everyman, reshaping the lies of his lost youth.  The thesis of this play came in the line “memories evolve to suit our needs”.  Hinton and Leah James, the object of his desire, both evolve convincingly into a variety of characters that all intersect convincingly.  Given that this is essentially a two-hour, two-handler, these two young actors should be very proud of the caliber of work Ferry has coaxed out of them.  Give that man a sheepskin!

“Rodeo Star’s most interesting aspect is its repitition of certain phrases or mannerisms in different scenes.  It has a certain resonance, for instance, when the businessman always taps his head distractedly before pouring a glass of scotch.  These selected repetitions are subtle yet powerful, suggesting a strange disassociation between fact and fantasy; somehow conveying a sense of life’s futility or absurdity.” 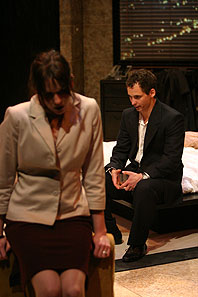 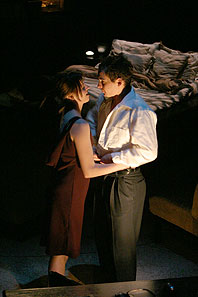 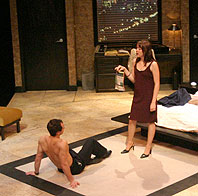 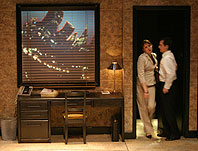