HE Who Gets Slapped

The Duck and the Swan:

On the brink of his greatest success, a world famous scholar witnesses his work credited to his former pupil—who also steals his wife!  Instead of ending his humiliating torment through suicide, he decides to profit from his loss and reinvents himself as France’s most famous circus clown HE—whose main schtick is his ability to get uproarious laughter from his audience by being beaten up!  Andreyev is credited with launching the symbolist movement of 20th century theatre.

“Every detail of the costumes is authentic, with a rich array of lush textures in velvet and silk.  The characters in their brightness seem to glow with an unearthly light against the charcoal sketched, cubist set of shadows and light.  I think Mary’s already on the short list for next year’s awards!  Congratulations to Brian Richmond and the entire cast and crew for breathing life into this darkling masterpiece.”

“The play is not a gut laugh, rather a head laugh as its material is foreboding; true to clowning, we are watching the small tragedies of life played out in its broadest form.  We loved this one.  You will, too.”

“It is hard not be charmed by the comic elements of the story, such as Consuella’s scheming father Count Mancini or the incorrigible clowns Polly and Tilly that come close to stealing the show form their more serious counterparts.
The choreography of the supporting cast is impeccable.  While the main drama is being played out on centre stage, eyes are drawn to trapeze artists Thomas and Angelica exchanging tender looks while a clown snickers at another’s misfortune as the circus’ politics of power and love take their toll.  Even the characters who seldom speak are brought to life against the colorful, chaotic backdrop of the circus.”

“HE Who Gets Slapped succeeds in being entertaining, as it is a humorous and flamboyant piece.  This is a nice change from the Phoenix’s many tragic and dramatic shows.  But don’t be fooled—it carries a definite, though undefined, dark side.”

“Indeed, the overall emphasis on physical theatre in HE Who Gets Slapped imbues it with an other-worldly grace and power.  Certain well chosen gestures and gaits add richness to the playwright’s themes:  betrayal, the masochism of unrequited love, and man’s self-defeating penchant for consuming and destroying others.”

“What’s truly great here, however, is Mary Kerr’s production design.  Costumes that range from richly glorious to the gloriously drab, a charcoal-hued set skewed like a scene from the ‘60s-era Batman, a sense of perspective that is as brilliantly off-kilter as the story itself.  Kerr’s talent is unmatched.  The same can be said for director Brian Richmond, who is obviously passionate about both theatre history and about providing students with challenging, intelligent production opportunities; while I applaud his intentions, as an audience member, I can’t say it makes for the most compelling viewing.” 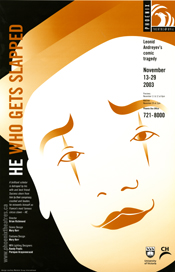 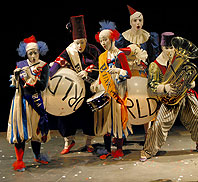 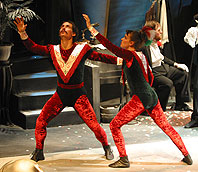 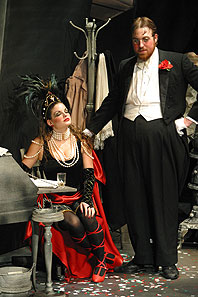 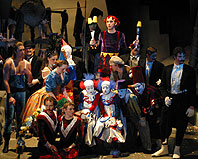 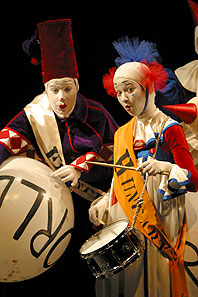 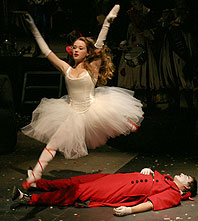