High comedy and pointed satire combine in this timeless tale of a hypochondriac who delights in his imagined illnesses.  In revealing the frailties of both doctors and patients, Molière proves that love and laughter are indeed the best medicine.

“When they work, irreverent reworkings of the classics are wonderful.  The University of Victoria theatre department scored a palpable hit two years ago with a zany remake of Aristophanes’ Frogs.  With The Imaginary Invalid, magic strikes twice.”

“Whether one is incline to ponder Molière’s intentions or not, this production works well on the most basic level as a bawdy yet witty romp, thanks in large part to Surette’s clear and confident direction.  The Imaginary Invalid is worth making a special effort to seek out.”

“Surette really did a fantastic job coaxing high caliber performances from the student actors.  I think the read Quid Pro Quo here was the transfer of energy from director to actor and visa versa.  The actors had the rare opportunity to work with a professional director and I think Surette really enjoyed the youthful energy of the University performers.  Freed from the constraints of material/period/scope that the Belfry naturally imposes, he has reinvented himself with this production as an imaginative and inspired puppeteer.”

“In fact, the opening-night audience was highly enthusiastic.  The Phoenix has a tradition of delivering energetic entertainment and this production is no exception.  As the opening play in what promises to be an innovative season—including the FIND Festival (Festival of Independent New Drama) in 2003—The Imaginary Invalid makes a lively start.”

“There’s nothing classic about the Phoenix Theatre production of The Imaginary Invalid.  Director Roy Surette takes Molière’s classical satirical masterpiece and twists it into a fascinating performance.
From the start of the production Surette breaks all the rules.  A bizarre mixture of 17th century Parisian ambiance and 1950’s flare decorates the production.  Costume designer Erin Macklem deserves praise for her spectacular display of dynamically textured and outrageous costumes.” 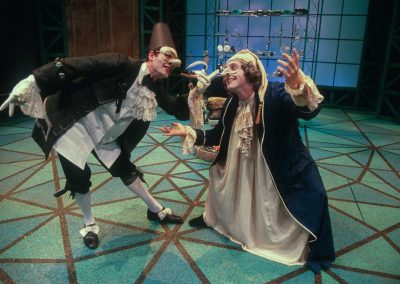 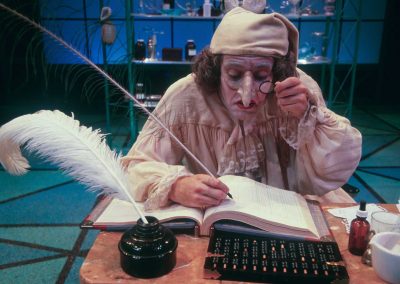 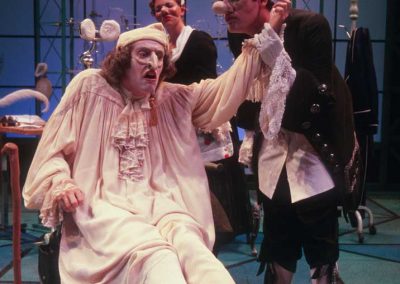