Circus Fire attempts to collaborate the story of a circus fire through physical action.  This play is inspired by the events surrounding a fire that broke out during a performance of the Ringling Bros. and Barnum & Bailey circus in the north end of Hartford on July 6, 1944.  One hundred sixty-seven people died as a result of the blaze, which broke out while several thousand were under the big top for an afternoon performance.  Flames spread instantly along the canvas of the tent, since it had been waterproofed with a mixture of gasoline and paraffin.  The spectator’s stampede to escape proved as deadly as the fire; hindering the escape of many were steel railings along the front of the bleacher and an animal chute blocking the main exit.  Because it was a circus performance, and because it occurred on a Thursday afternoon during World War II, when many adults held down one or more jobs at war production plants, children accounted for many of the casualties; only one hundred of the dead were older than fifteen.

“This visual tour de force relies heavily on mime and commedia dell’arte.  Circus Fire is bold, imaginative and terribly clever.  Smartly directed and elegantly produced, it is a memorable piece worth seeking out.”

“It’s rare that a piece of theatre moves an audience to tears, and rarer still that a piece of student theatre would have that kind of effect.  But when a piece of student theatre lacking any sort of obvious, dialogue-driven narrative has just that sort of emotional impact on an audience, it’s an accomplishment well worth noting.  Such is the achievement of Circus Fire, a brilliant collaboration between local playwright Janet Munsil and director Britt Small that had more than a few people sniffling by the final scene.”

“The four-person cast is uniformly excellent.  Annette Dreeshen, Mike Hall, Kathlene McGuinness and Chad Wood all shift between portraying adults, children, spectators, performers, animals, riggers, clowns—basically anything you’d find at a circus—with a fluid grace that at times seems more dance than acting.  And when the shift from childlike innocence to growing panic and horror comes, as it must, it’s as much their collective performances as the script which brings on the tears.  Credit too must go to Avery Estuan for his sometimes-spooky, sometimes-celebratory score; when combined with Randy Poulis’ simple yet evocative lighting, Aaron Spouler’s sparse scenic design and the George Theatre’s seating-in-the-round construction, it’s never hard to believe you’re anywhere but exactly where this talented creative team wants you to be.” 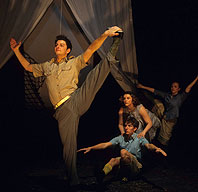 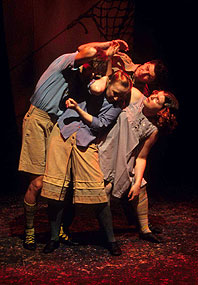 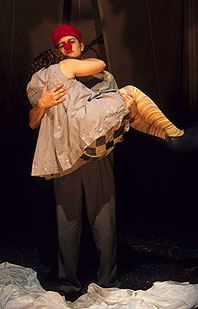 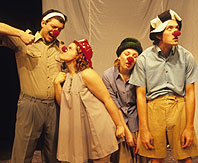