The Monument poses a timeless moral question: how much choice does a soldier have in wartime? Must he follow orders, do what everyone else is doing? And what of a mother, left to deal with the aftermath of an ethnically-motivated civil war? What choices is she free to make in punishing her child’s killer? Which force is greater, love or hate? Part ritual, part myth, part rite of passage, The Monument ultimately chooses redemption and the healing power of love. Wagner’s stunningly effective drama demands our attention, unsettles our complacency, and defeats our cynicism while gripping the heart.

“Clad in combat fatigues and shaved bald, Collins managed on Thursday night to capture Stetko’s combination of bravado, pain and odd moments of nihilistic whimsy in a confidant and nuanced performance. His opening monologue—in which he recounts, for instance, his inability to achieve orgasm while raping female prisoners—is a particularly difficult piece, yet the actor was convincing.”

“This is a grueling duel for the two actors and they’d never make it through the ten night run without [Linda Hardy’s] guidance. As Mejra cradles the decomposing body of a girl pulled from her unmarked grave she howls out in her pain. I never knew the meaning of keening until Thursday night. It’s enough to make the hairs on the back of your neck stand up.”

“Inspired staging by Hardy and the set design of Patrick DuWors dares the audience to examine the play’s themes in their own lives. At times shocking and moving, the piece never ceases to evoke powerful emotions and unabashed honesty. Female lead Rebecca Henderson remarked the play is not only about ‘the search for truth’ but also an exposition on the ‘impossible choices of war’.”

“Taking in the stark set, I notice the electric chair, the 10-and-a-half tons of gravel and then, shockingly, a glimpse of myself. Credit is due to designer Patrick duWors who, by featuring an unsettling wall of mirrors as a backdrop, gives the audience no choice but to witness themselves on stage with the cast. DuWors’ purpose is to make people think about what they would do in the shoes of those directly or indirectly involved in the war, and the effect certainly works; as I watch the actors on stage I look past them into the mirrors and see myself, a civilian woman, and my date, a military man. As director Linda Hardy planned, it makes me think, and I realize just how close to home The Monument hits.” 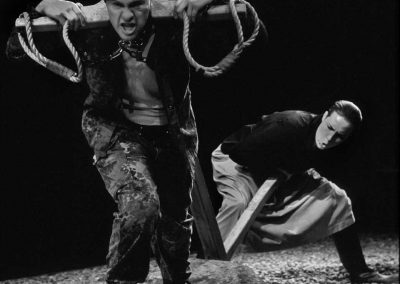 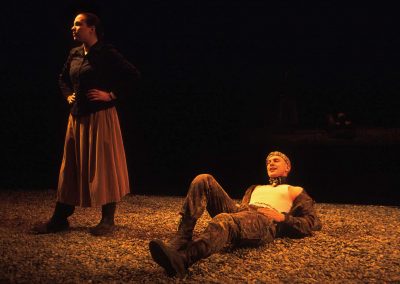 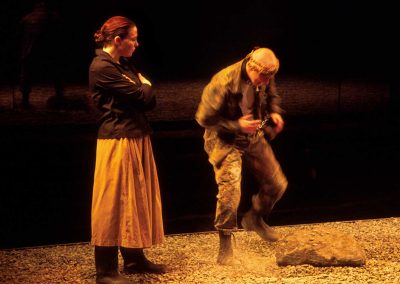 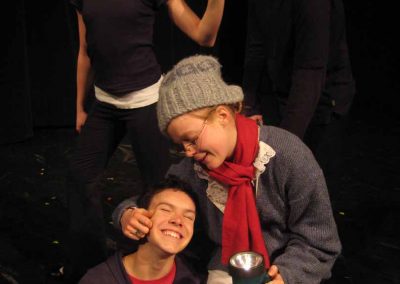 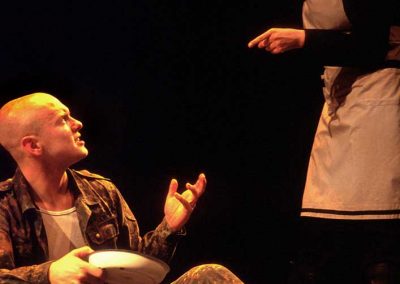 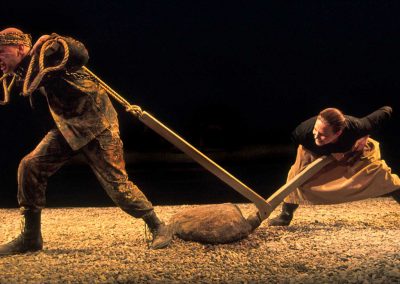