This rarely-produced play, regarded by Beckett himself as his best, remains as astonishing and controversial today as when it was first staged, half a century ago. A profound and bleakly comic rumination on the rules of the game of life, death and relationships, Endgame is a theatrical tour de force.

“In a rather earnest and sometimes plodding University of Victoria production, Endgame’s tattered characters exist in a horrible grey bunker of cement blocks—a spectacularly minimalist set created by Allan Stichbury.”

“Stevenson captures Nagg’s ebbing sense of remembered joy in his storytelling. And Pipars manages to make Nell one of the most convincing characters. As Nagg nattered on, her face sometimes trembled and crumbled. These were compelling and powerful sequences, skillfully done.”

“The University of Victoria Phoenix Theatre’s production is exceptional for many reasons. Director Giles Hogya knows his Beckett and loves him. John Krich is one of the best stage actors you will ever see in this town.

Scenic designer Allan Stichbury has built a bleak, prison cell of a set—where monolithic cinderblocks shut out any hint of an outside world and focuses all the action on the players and their words.

Krich acts with passion and delivers a slow burn that always remains just an inch away from ignition. Listening to the way he wraps his well-trained voice around his soliloquies is irresistible. As he sits constricted on his throne, he is master to a trio of potential foils.

Ryan Arnold is Hamm’s pseudo-servant Clov, dragging his gimpy leg up and down ladders and cackling like a madman. He is mysteriously indebted to Hamm—right to the downer ending. Arnold has fun with the role, managing even to upstage Krich on occasion.

“From the set and costume design to the superb acting, everything in the Phoenix’s production is deceptively simple. But below the surface lies as intricate web of mounting tensions, each element pulling together to create a cohesive whole.

This tension and its continual elevation through the play is the key to enjoying Endgame. If you are uncomfortable with the tension, and fight against it, this play will be something you must grit your teeth and endure. But if you can recognize the tension as part of what it is “about”, Endgame is a play that will make you think instead of merely shade your head in despair.”

“Written in 1957, Endgame is still a biting and timely commentary on the human condition. Well-directed and acted, this cogent production is worth seeing, especially if one is a little shy of taking in a “modernist” work.” 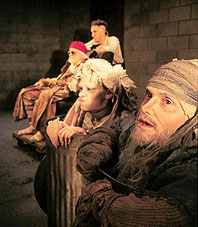 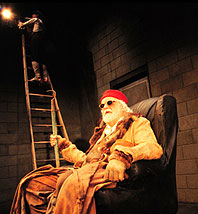