Two Planks and a Passion

Set during the preparations for a Medieval religious festival, Two Planks and a Passion is an affectionate and irreverent recreation of the rivalries that enlivened theatrical performance during the English Middle Ages. Amidst brisk and often hilarious competition for the attention of the visiting King, members of the humble trade guilds learn timely truths about the real nature of theatrical magic. Can a man with a beard play the part of the Virgin Mary? Come find out!

“I had a strange sense of déjà vu at the University on opening night, that familiar sense of having seen it all before.  Of course, I’ve been to dozens of shows in the Chief Dan George theatre, but it was more than that.  As the lights came up on the beautifully designed and executed set by Allan Stichbury, and as the pageant of tailored medieval gowns and cloaks by Mary Kerr swept in, it nagged at me to the point of distraction.  When a flourish of trumpets signaled the arrival of Richard II and his Queen, Anne of Bohemia, it came flooding back to me: Stratford.  Of course Stichbury and Kerr have both designed productions for Ontario’s cultural juggernaut and their experience is more than apparent in this elaborate finale to the season.”

“This A-list cast know the accents, know how to move in the costumes and recreate the era through painstaking research.  There are some major young talents here: Alex Cameron, Jay Bennett, Ryan Arnold, Kate Humble and the always delightful Meg Roe.   As for the rest of us, just close your eyes, picture a two-hour drive down the 401, imagine -JUST imagine- a few million Canada Council bucks and we could all pretend to be in Stratford, thanks to UVic!”

“Director Linda Moore, one of the nation’s finest theatrical directors (late of Neptune Theatre in Halifax), understands Anthony Minghella’s ripe sense of satirical humor and, what’s more, is able to translate his medieval sitcom Two Planks and a Passion into something university theatre students seem to embrace with their own particular passion. Moore’s steady presence creates some magic for the University of Victoria’s Phoenix Theatres, in this tale that attempts to impart a basic understanding the rigid class structure of medieval England while skewering it ridiculous pettiness. The result is two hours and 40 minutes of adventurous theatre that is a grand, historical costume drama.”

“This production, capping the University of Victoria theatre department’s 200 – 2001 season, is well worth seeking out.  It’s something of a tour de force, boasting a terrific set and costumes, bold direction and some fine acting from a student cast.”

“This show has a top-drawer creative team.  Mary Kerr, a nationally acclaimed designer, has created a beautiful set of costumes ranging from great, thick, patched peasant’s woolen leggings to the beautifully flowing gowns and robes of the king and queen.  And Allan Stichbury’s multi-leveled set is marvelous.  A foot-worn plan sidewalk forms a circle which provides a powerful visual simile for the Corpus Christie Cycle.  Everything is constructed with tremendous attention to detail, whether it be an elaborate period bed or a sturdy wooden crucifix built to support an equally sturdy peasant.”

“This UVic production is not humble; a great script fabulous designers, a renowned director and a hot cast.  Phoenix has really outdone itself with their final show of the season, throwing stars and lucre at the production – and while it is lavish and commanding, it is the integrity and cohesion of the entire group effort in this production that ultimately shines.  This ensembling is quite an accomplishment.” 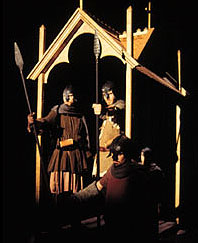 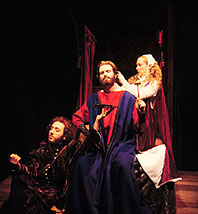