Athens is losing the war, and all of the great playwrights are dead. Who will save the city? Who will give the citizens good advice? In an act of desperation, Dionysus, cowardly god of wine and theatre, dresses up as Heracles and goes down to Hades for help. But who should he bring back with him? Aeschylus, the traditionalist? Or Euripides, the rebel? In this wacky satire of plays and playwrights, watch as the ancient world’s greatest men of the theatre go head to head in a battle of poetic wits. The original Dead Poets Society-complete with singing frogs!

Guest Director Brian Richmond’s approach to this classical Greek comedy is handled in a very “un classic” manner. Drawing on pop comic conventions that have their roots in the commedia dell’arte and vaudeville, the net comic effect draws on a humour that modern audiences would more likely associate with the Marx Brothers, Monty Python or SCTV. This production of Frogs includes puppetry, shadow work, black light, stage fog, contemporary references and original music – and the singing frogs. What this production will stay true to however, is the outrageous, ribald humour that translator Jennifer Wise and Director Richmond see as central to Aristophanes’ sensibility.

“The Frogs showcases the enthusiasm and talent of a young cast tackling the type of show that only a University can pull off.”

“. . . Frogs, is more fun than, well a barrel full of frogs.  Puppet sequences and deft visual tricks that reduce the heroes to a fraction of their size work well with Alan Stichbury’s clever, multi-leveled set.  At best, the comedy leaps about with the manic energy of a fringe theatre show firing all cylinders.  What could be more appropriate for a university theatre production. “

“Universities are supposed to be a forum for taking risks, so it’s refreshing to see how theatre students at the University of Victoria are breathing life into some dead and dated drama.  Well, it’s more like artificial resuscitation on some, 2,400 year old Aristophanes, as they brazenly stage a brand-new adaptation of the ancient Greek comedy classic Frogs.”

“Theatre prof. Jennifer Wise has penned a smart and sassy new translation, and guest director Brian Richmond further contemporizes her lines with pop culture aplomb:  his dancing Muses (choreographed by Kim Isbister) put the line back in the Greek chorus, and the whole show rolls with the modern rhythms of R&B ballads, hairmetal refrains and hip-hop freestyling.  . . . Still there’s lots of eye-candy to keep audiences tittering:  Mary Kerr’s glamrock-meets-Value-Village costumes and ingenious puppet outfits deserve an essay unto themselves, while Alan Stichbury’s multi-tiered set functionally evokes the descent in the underworld.  For all the technical frippery, though, this family of Frogs soars on the sheer ingenuity and energy of the direction and performances- something the play’s original author would certainly recognize, and applaud.” 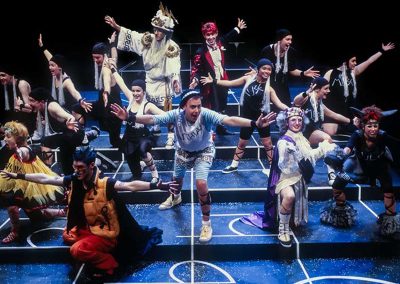 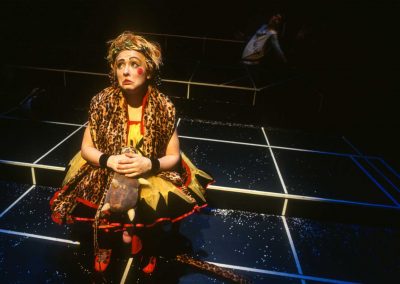 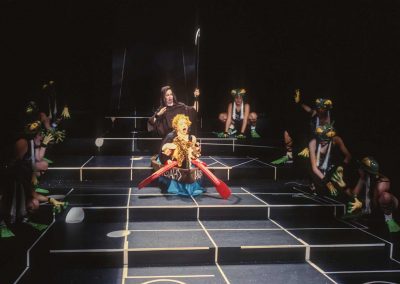