Originally known as the Silent Brotherhood (Bruders Schweigen), The Order was a private guerrilla army, formed in September 1983 with the goal of destroying the U.S. government. Basing their beliefs in a misguided patriotism, paranoia and a race-based theology known as Christian identity, twenty-three people under the leadership of Robert J. Mathews, sought to emulate the fictional account of the overthrow of the U.S. government found in the book, The Turner Diaries.

After they were apprehended by the FBI, the government charged The Order with racketeering based on sixty-seven separate crimes. More than half the people (including Denver Parmenter, Thomas Martinez and Randall Radar) entered into plea bargains and agreed to testify against The Order.

On April 12, 1985, a federal grand jury in Seattle indicted twenty-four members of The Order on charges of racketeering and conspiracy. Through guilty pleas and other circumstances, only 1O defendants were actually tried in Seattle. Those on trial included Randy Duey, David Lane, Bruce Pierce, Andrew Barnhill, Gary Yarbrough and Ardie McBrearty (characters who appear in the play) as well as Jean Craig, Richard Kemp, Frank Silva and Randall Evans.

Steven Dietz has created God’s Country based on actual court records. All of the words attributed to actual, named persons, are real. None have been invented.

Steven Dietz, professional director, has worked extensively with new
American plays. He is an award-winning playwright whose more than 15 plays,
have been seen at over eighty regional theatres across the United States, as
well as in many countries around the world. (

Steven’s recent work has included his adaptation of Shusaku Endo’s
novel, Silence, which he presented in Tokyo and at the Milwaukee Repertory l Theatre in 1995. Some of his other stage adaptations are Joyce Cheeka’s The Rememberer for the Seattle Children’s Theatre (1994), and Bram Stoker’s
Dracula for the Arizona Theatre Company (1995).

His play Lonely Planet which premiered in Evanston, Illinois in 1993 and has received many productions, won the 1994 PEN USA West Literary Award in Drama. The Off-Broadway production of his play, Trust, was named one of the Top Ten Plays of 1995 by New York’s Backstage.

His latest work includes Handing Down the Names (ACT, 1995), Private Eyes, which recently premiered at the Arizona Theatre Company; Still Life with Iris, written for the Seattle Children’s Theatre; and The Nina Variations which premiered this past summer at the Contemporary American Theatre Festival in West Virginia and wiil have its New York debut in the Fall of 1997, where it will be directed by Steven at the Classic Stage Company.

In addition to directing numerous productions of his own work, Mr. Dietz has directed over twenty world premiere productions, including John Olive’s The

Voice of the Prairie, Jon Klein’s T Bone N ‘Weasel, Jim Leonard Jr.’s Gray’s
Anatomy, Doris Baizley’s Tears of Rage, Tom Williams’ New Business, and
several plays by Kevin Kling — including Home and Away, Lloyd’s Prayer, 21-A,
and Auguste Moderne. He has lectured and taught at numerous universities
across the United States, including his alma mater Northern Colorado State
University. His writings on the theatre have appeared in American Theater
Magazine, Subtext, Cal/board, and the Los Angeles Times. i

Steven’s play God’s Country, which he wrote in 1987, has had over 100 productions in professional and university theatres throughout the United I States, and it has also been seen in Pretoria and Johannesburg, South Africa. i The University of Victoria’s production will be the Canadian premiere of this
play.

Steven Dietz’s plays have been seen at over eighty regional theatres across the United States, as well as Off-Broadway. Steven Dietz lives in Seattle

Harvey M. Miller is a member of ACTRA and both Canadian and American Acto r’s Equity . For the past 25 years he has worked profess ionally as an
actor and director in both Canada and the United States. His diverse directing credits include New York product ions of Talley’s Folly and Chapter Two for the Westchester Theatre Ensemble and Ten Little Indians for the Provincetown Repertory Company. He has also directed productions of Les Liaisons Dangereuses and Who’s Afraid of Virginia Woolf? for The Guild Theatre in White Horse.

As an actor, Harvey has appeared onstage in various North American regional theatre productions including Luv for Persephone Theatre , Saskatoon; Social Security for Stage West, Edmonton; Julius Caesar for the Clarence Brown Company, Tennessee; and Two for the Seesaw for the Delano Playhouse, New York. On television he has appeared in episodes of Air Wolf II and Bordertown; feature films include The Journey of Natty Gann, Harry Tracy and The Glitterdome.

In addition, he has conducted numerous workshops for Theatre BC, the Kennedy Center/American College Theatre Festival-Northwest Drama Conference and American Alliance for Theatre & Education. He has served as a Directing consultant on various productions and adjudicated drama festivals in the United States and Canada.

Harvey is an Associate Professor of Theatre at the University of Victoria and teaches directing to both undergraduate and graduate students.

I was first introduced to Steven Dietz’s powerful play, God’s Country at the Oregon Shakespeare Festival in 1989.The play had an enormous impact on me and I knew that this was a play that a university audience should see.

For those who might question whether the University of Victoria’s Department of Theatre should be doing a play based on an American racist group, I would answer that this play addresses important universal issues including freedom of speech and the rights of the individual in relationship to the good of society.

In the lobby you will see a display that documents various Canadian racist incidents that have occurred in the last five years. Perhaps the most publicized Canadian cases since 1984 were those involving Jim Keegstra, the former Alberta school teacher, and Ernst Zundel, the pro-Nazi publisher from Ontario, who were brought to trials emanating from their racist beliefs. Both men were defended by Doug Christie, a longtime Victoria resident.

As a teacher of directing, I tell students that it is critical that they care deeply about the plays they choose to direct. This play confronts the racism that we can no longer ignore nor deny.
In his book, Web of Hate: Inside Canada’s Far Right Network, Harper Collins, Warren Kinsella writes,

“When confronted by the growing web of hate, it is the inclination
of many Canadians – too many – to avert their eyes and cross to the other side of the street. Unaware, and in some cases uncaring, they persist in the belief that it is too dangerous to turn back the rising tide of hate and that it is too dangerous to get involved.
But, the simple fact is that, whether we like it or not, we are involved. The haters are here, and they are not going to go away.”

In October, the Department of Theatre was honored to have the playwright, Steven Dietz, as our visiting Lansdowne Scholar. At his public lecture, Mr. Dietz challenged us to consider the theatre as a social forum. He spoke about his play.

“… God’s Country is an attempt to use the ritual of the theatre event to reflect upon some disturbing facts, some insidious fears … The Theatre is a necessary place for a society to confront itself.
It is a place for reasoning and rage, recognition and discussion.”

Everyone involved in this production thanks you for attending tonight’s performance. 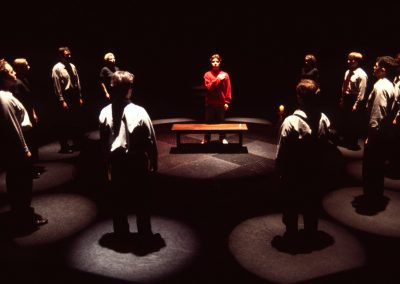 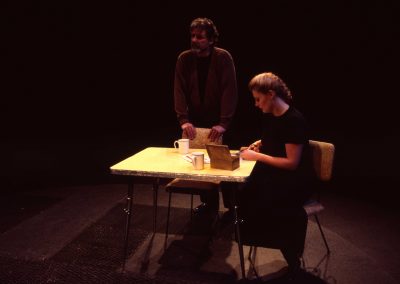 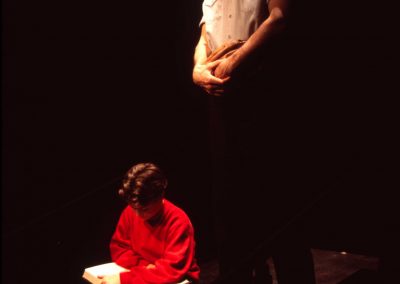 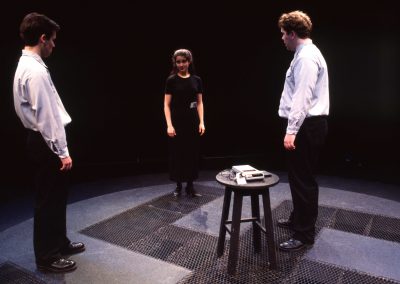 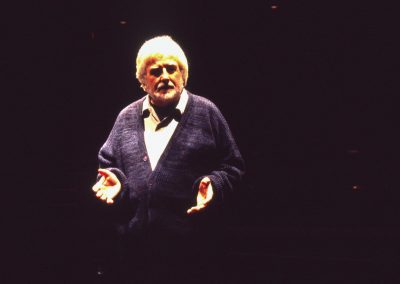 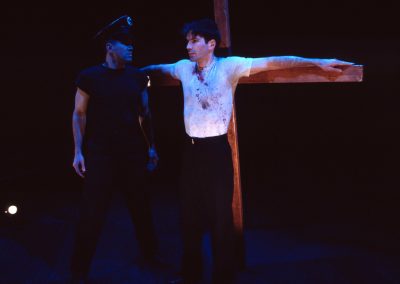 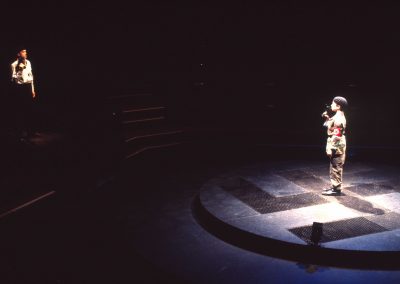 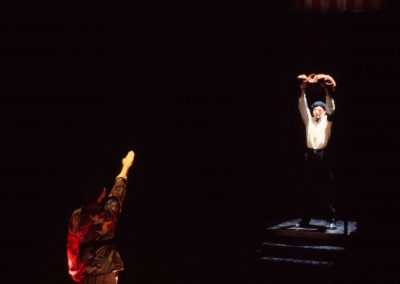