When it comes to taking a university education to the next level, David Leach is game for making changes. Chair of the Department of Writing and director of UVic’s Technology & Society program, Leach is asking the question: can the tools and techniques of interactive media motivate the “gamer generation” to study math formulas and conjugate French verbs with the same intensity as when they play Grand Theft Auto or Candy Crush Saga?
As he told the Globe and Mail in a 2014 article on technology and gamification, a couple of experiments suggest they can. “In one experiment,” writes the G&M, “Mr. Leach split students into two groups, one studying traditionally and the other according to gamification principles that included the acquisition of achievement badges, points, placement on leaderboards and the participation in ‘quests.’
‘We found that the gamified group spent more time online, had more interaction with each other, and that the top five participants were women,” reports Mr. Leach. Another experiment required students to use smartphone apps to design the campus of the future.
One group developed a health and fitness paradise that promoted physical activity, while another came up with a dystopian “alterverse” where surveillance had run amok.
‘Calling it gaming makes it sound childish; it’s more appropriate to think of it as interactive media,’ says Mr. Leach. ‘Given the influence of video games on our students’ lives, universities need to take interactive digital media seriously, both as a subject and as a tool for learning. Used in the right way, games can motivate students, help them think critically and even promote social good. A better world needs better games, and that should start in our education system.’ “
Leach also developed the 2013 UVic gamification conference Games Without Frontiers and coordinated the development of the popular course The History of Video Games and Interactive Media. Given that gaming is a $2 billion industry in Canada alone, generating $24 million in Victoria—a total that increases to $63 billion worldwide in 2013, with projected growth up to $78 billion by 2017—and the implications of Leach’s research are obvious. 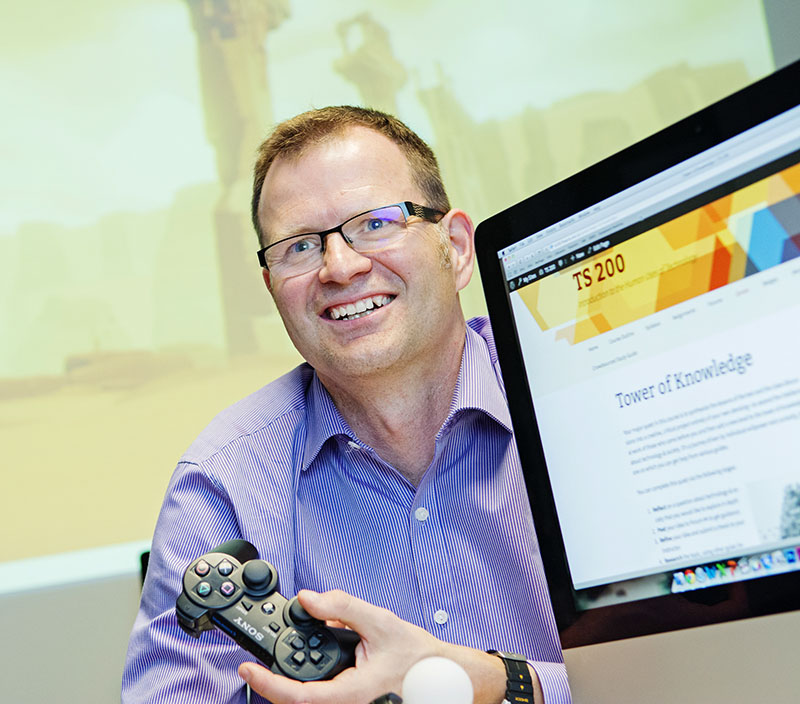