When the Orontes Guitar Quartet were welcomed as Visiting Artists to UVic last November, it was a momentous occasion not only for the Syrian musicians themselves but also the international guitar community. Now, the Orontes are celebrating their time in Canada with a gala downtown finale at the Alix Goolden Performance Hall on October 18.

At the time of their arrival on campus, the Orontes Quartet — Gaby Albotros, Orwa Alsharaa, Nazir Salameh and Mohammed Mir Mahmoud — offered a remarkable message about the power of music, hope and determination in the face of the ongoing violence of the Syrian civil war; and, in the 11 months since, they have continued to spread that message with appearances on campus and performances across Canada.

“We got to know a lot of good people and had the chance to travel through the country and perform in many places, which allowed people to know more about Syria and Syrian musicians,” says Alsharaa, speaking for the quartet. 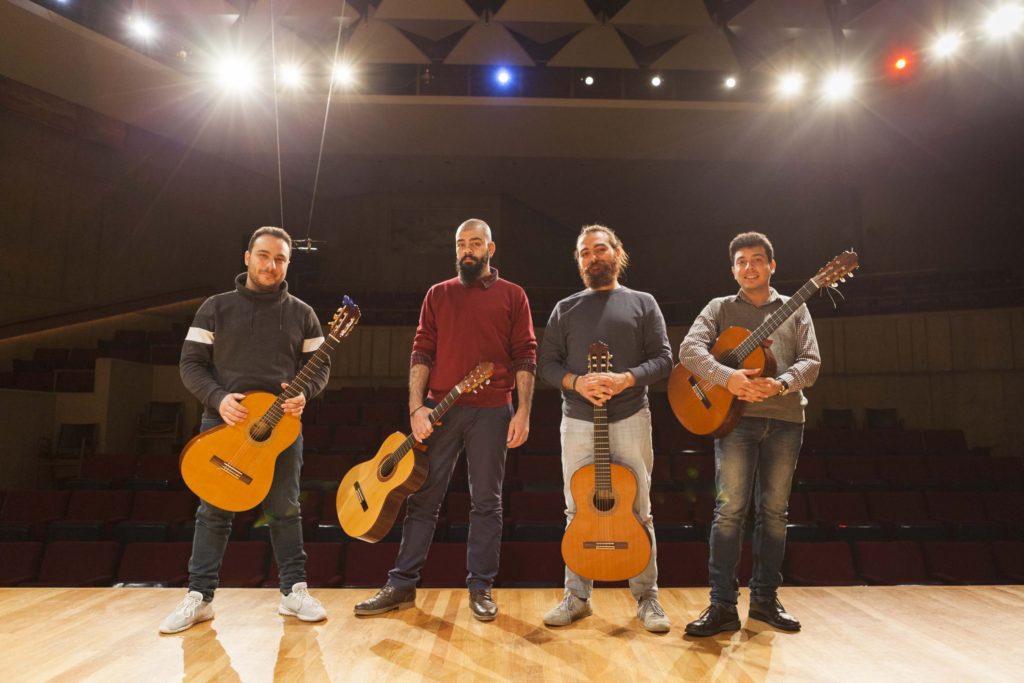 A long journey to Victoria

After the classical guitar ensemble were denied entry to the US in 2017 due to the ongoing travel ban, School of Music guitar instructor Dr. Alexander Dunn stepped in and spent nearly 18 months working with two US-based organizations — the Artist Protection Fund (APF), an innovative initiative of the Institute of International Education, and the non-profit organization Remember the River — to secure the Orontes a placement at UVic.

Dunn, who received a 2019 Provost Advocacy & Activism Award for his work in bringing the Orontes to UVic, describes it all as “an exhilarating experience”.

“Knowing that a group of musicians on the other side of the world — connected by common interests but separated by the chasm of human rights abuses and the outrages of war — was life-changing,” he says. “Suddenly the abstraction of religious and cultural conflict occupied my thoughts in a very real way.”

A message of peace & music

While in Canada, the Orontes took their universal message of peace through music to cities large (Vancouver, Calgary, Winnipeg), small (Port Alberni, Salmon Arm, Gibsons) and in-between (Kingston, Sudbury, Red Deer). “We were surprised at how huge is Canada, and how long it takes to travel from one part to another,” says Alsharaa.“Everyone was friendly and welcoming, but the beauty of each city and its own character was the most beautiful thing.”

In addition to their travel and concerts, the Orontes also met with students, faculty and other professional musicians, and recorded some new material using the School of Music’s facilities — which, says Dunn, was all part of their APF Fellowship. 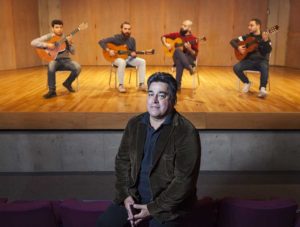 Alexander Dunn with the Orontes

“They learned that a high degree of musicianship and learning is the norm here,” he says. “They were exposed first-hand to a stream of virtuoso players that showed not only how inspiration could directly affect their craft, but that international standards and expectations — which may not have been a part of their everyday experience at home — are readily available here.”

With their APF Fellowship ending in November, the Orontes still have a pair of concerts in Toronto and Montreal with the Canadian Arabic Orchestra & Choir — but the October 18 performance will be their final performance in Victoria. Hosted by the Victoria Guitar Society, Syrian Encounter: An Evening with the Orontes Quartet will offer a thematic night featuring a reading by Department of Writing professor Deborah Campbell, author of the award-winning book, A Disappearance in Damascus — also Brazilian musician Celso Machado.

Ahead of the concert, the Orontes and Dunn were interviewed in these respective articles by CHEK TV and Monday Magazine.

As for the future, the guitaristsare hoping for extensions to their work permits while they apply for study permits and Canadian citizenship.

“The most important experience for every musician is to perform as much as possible, which is something we were able to do thanks to the APF, Alexander Dunn and, of course, UVic,” says Alsharaa.

“We want to thank all the people who made our trip to Victoria possible. We are really lucky to be here in Canada, especially in Victoria — which is one of the most beautiful places on earth.”

Theatre alum and two-time Canadian Comedy Award-winner Sam Mullins has made a career of sharing his own life experiences on stage . . . whether they be the angst-ridden and tender moments of a 16-year-old falling in love for the first time, some hilarious and life-changing requests while working as a waiter, or the bleary-eyed joys and profound revelations of becoming a new father. 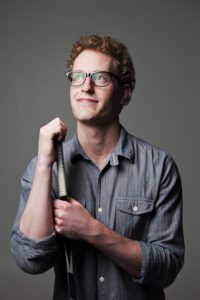 Now, the Department of Theatre is honoured to present Sam Mullins in Weaksauce & Other Stories as this year’s Spotlight on Alumni, running October 9 to 19. Described as a “master storyteller” (Winnipeg Free Press) and the “Stuart McLean of the millennial generation” (Toronto Star), Mullins performs the moments of his life on stages at Fringe Festivals, on radio programs, and at storytelling competitions and events across North America.

Weaksauce & Other Stories is a greatest-hits collection of his award-winning stories, including the full-length version of his five-time Best-of-the-Fest-winning story Weaksauce; the premiere of a new story about fatherhood; and two 10-minute-long stories based on his shows Tinfoil Dinosaur and The Untitled Sam Mullins Project.

Weaksauce tells the story of the summer Sam turned 16, when he left home to work as a camp counsellor only to be blindsided by the first great romance of his life. This achingly angsty and tender coming-of-age story is a comedy of first times, second chances and third wheels. Toronto’s Now Magazine called it “Fresh, funny and heart-poundingly alive.”

“Weaksauce is my favourite thing I’ve ever written,” says Mullins. “It poured out of me over a weekend during a 2012 heatwave in my childhood bedroom in the Okanagan. If every first draft came as easily to me, I would have so much more spare time!,” he joked from Toronto, where he makes his home with his wife and daughter.“I’m delighted to return back to the stage where my theatre journey began. Truly everything I know about theatre I learned inside those walls. It is a very special place to me, and I couldn’t be more pleased to be bringing my most special piece back here.” 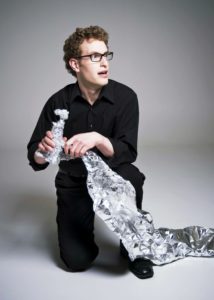 As a storyteller, Mullins has been a contributor to NPR’s This American Life, The Moth, CBC’s Definitely Not the Opera and the RISK! Podcast. He has also worked as a staff writer on CBC’s Air Farce New Year’s Eve Special and for five years on the CBC radio sketch program The Irrelevant Show.

The public is invited to a free preshow lecture at 7pm Friday, October 11 with Sam Mullins in conversation with Theatre professor Peter McGuire as they discuss Sam’s life as a touring Fringe artist and comedy writer. (Please note that Weaksauce & Other Stories  includes some coarse language and is suitable for ages 16 & up.)

The Phoenix Theatre’s 2019-20 season continues this fall with Shakespeare’s classic tragedy Othello (November 7-23) directed by professor Brian Richmond. In the spring, professor Conrad Alexandrowicz directs Alan Ayckbourn’s sci-fi satire Comic Potential (February 13-22), and the season closes with professor Peter McGuire directing The Children’s Hour (March 12 – 21), Lillian Hellman’s drama about the power of lies and two women who risk everything for the truth to be heard.