One of the world’s great interpreters of the German art song tradition known as Lieder and one of the most frequently recorded lieder singers of modern times, Mitsuko Shirai is acclaimed worldwide for her extraordinary performances and recordings of songs by Franz Schubert, Robert Schumann, Hugo Wolf, and others. Now, Shirai will receive an honorary doctorate from UVic on November 14, as part of the Fall Convocation. During her visit to campus, she will also give two presentations at the School of Music as an Orion guest artist.

As part of a Lieder duo with her husband Hartmut Höll, the Japanese soprano and mezzo-soprano has set a high standard as an interpreter of German lied; the duo has given recitals in Europe, Scandinavia, Israel, Africa, Japan, South America, Russia, the USA and Canada, but they are especially well known in Germany and Japan. A committee of Japanese artists awarded Shirai the Great Idemitsu Music Award 1996 in appreciation of her artistic work. She has been praised by German publication Der Stern as “the first leading lady of Lieder singing”.

But Shirai is not just limited to recital singing. A contralto, she has also found acclaim for her performances of Gustav Mahler’s orchestral songs, appearing in concerts with the Berliner Philharmoniker, New Japan Philharmonic, Atlanta Symphony Orchestra, Nouvel Orchestre Philharmonique de Paris and the Wiener Symphoniker. Shirai has also appeared in operas ranging from Mozart to Wagner.

Shirai is also distinguished for her illustrious teaching career. She teaches at the Musikhochschule in Karlsruhe, one of the primary music schools in Germany, and has conducted numerous workshops in Germany, Austria, Finland, the United States and in her native Japan. Many of her students have gone on to become the bright lights of today’s concert stages.

Shirai will speak about her career as a performer and teacher from 4–6pm Thursday, Nov 15, in MacLaurin B037. Don’t miss this unparalleled opportunity to get to know one of the foremost performers of our time—one who has worked closely with other icons of song performance. And then from 3–5pm Saturday, Nov 17, in the Phillip T. Young Recital Hall, she will lead a masterclass on Lieder by Robert Schumann, working with graduate student vocalists Alana Hayes and Kyron Basu (with Music professor Harald Krebs on piano) on two Schumann song cycles (opp. 35 and 135). Both these events are free.

UVic is this year’s host for the fourth annual Building Reconciliation Forum, in partnership with Universities Canada, the national organization for Canadian universities. The forum (Nov. 15–16) brings together close to 250 thought leaders from universities, Indigenous governing bodies and communities, and federal and regional government officials to consider how universities are answering the Truth and Reconciliation Commission’s Calls to Action. 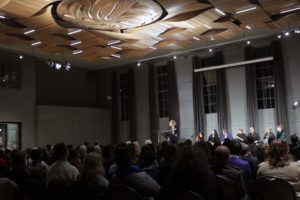 There was a capacity audience for the Nov 15 forum at the Baumann Ctr (photo: Fiona Ngai)

This year’s theme is Ts’its’u’ watul tseep, meaning to help one another. The teachings of Coast Salish First Nations guide us to “work together in a good way” and “to be prepared for all work to come” so that universities across Canada make a difference in the lives of Indigenous students and their communities.

Panels over two days are addressing TRC topics such as child welfare, language and culture, education, health and justice. Participants will be discussing how universities and their partner institutions can work with Indigenous communities to answer the Calls to Action, obstacles to answering these Calls, and how universities can make a positive difference for Indigenous students and communities. Forum discussions will be compiled into an open-access report. See the schedule of events.

As part of the Forum, Fine Arts Dean Dr. Susan Lewis will be hosting a panel discussion on First Nations Art Practice & Reconciliation. Local artists, administrators and activists will discuss how Victoria’s arts community can advance decolonization and reconciliation. The moderator for the panel is local Cree/Metis TV producer and writer Barbara Hager, and panelists include:

The panel runs from 6:30–9:30pm Thursday, Nov 15 at Pacific Opera Victoria’s Baumann Centre, 925 Balmoral Road. Note: while this event is free, it is technically already sold out. Some seats may be available at the door. 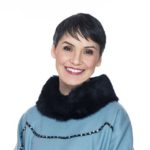 Also during the Building Reconciliation Forum, Fine Arts will be hosting noted Inuk singer-songwriter and Order of Canada recipient Susan Aglukark as she presents Nomad, a musical and visual journey through Inuit history, shedding light on some of the psychological and cultural impacts of the rapid change in Canada’s North. Seating will be extremely limited for this event running from noon-1:30pm on Wednesday, Nov 14, in the Chief Dan George Theatre in the Phoenix Theatre building.

Victoria-based artist Colton Hash is the inaugural recipient of an Artist-in-Residence program announced today by the Faculty of Fine Arts and Ocean Networks Canada (ONC), a UVic initiative. The new ONC residency will strengthen connections between art and science, and broaden perspectives on major issues ranging from technology and the environment to biodiversity and healthy communities. 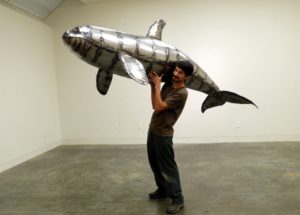 “I see this as a great opportunity to collaborate with ocean scientists and experiment with digital media to communicate some of the dynamic processes that play a critical role in coastal waters,” says Hash.

“Whether it’s how a kelp forest responds to climate change or how the thawing of frozen methane affects sediment stability of submarine slopes, I hope I can use interactive art to inspire viewers to care more about what is happening beneath the ocean’s surface.”

Hash has built his artistic practice on the integration of environmental knowledge through visual art and computer programming in order to communicate concepts related to ecosystems and climate change. A short film of his interactive sculptural installation, “Resonant Disintegration” (with projected visualizations of climate data and underwater recordings of shipping traffic), won the two top awards at the Research Reels contest during UVic’s Ideafest in 2018, and was recently remounted at Victoria’s Flux Media Gallery in October during the Antimatter Media + Art Festival. His work was also featured in UVic’s KnowlEDGE news feature in March 2018. 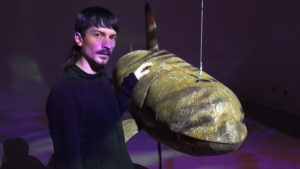 “The ecological challenges we face are complex and hard to be understood through science alone,” he adds. “People are being flooded with scientific data and intellectual analysis of what is wrong with the world, without having time to process what it means to them on deeper, more personal levels. Art can create spaces for people to reflect emotionally, spiritually and intuitively on our relationships with nature.”

While in the position, Hash will interact with UVic fine arts faculty members and ONC scientists, as well as other individuals using ONC’s world-leading ocean facilities. He intends to develop an interactive digital media installation that allows the public to explore and emotionally connect with ocean systems.

“Ocean Networks Canada is looking forward to collaborating with Colton,” says ONC chief scientist Dr. Kim Juniper. “We’re excited to see what his use of ocean data will produce to convey marine conservation and global change in his art.”

How do you improve on one of the greatest films ever made? If you’re the UVIc Jazz Ensemble, you “comprovise” a new score to be played alongside a screening of the 1925 Russian silent classic Battleship Potemkin. 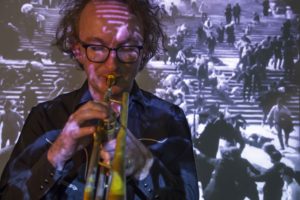 For jazz ensemble leader and School of Music professor Patrick Boyle, updating silent films with improvised scores is nothing new: he’s been doing it for over a decade now, jazzing up the likes of classic cartoons, Charlie Chaplin shorts and Buster Keaton’s The General. And while the choice of film matters, it’s the idea of “comprovisation” that really grabs his attention.

“Of everything I do professionally, playing live music for silent film is my absolutely favourite thing,” he says. “A lot of it involves going back to the idea behind the earliest type of silent film performance: a person composing and improvising — comprovising — at a piano or organ. We just embody that for the 21st century with a band.”

“I love how what we play can completely transform a scene: changing the music completely warps the interpretation for an audience,” he explains. “It’s especially effective with sentimental moments, which you can make more humorous, and vice-versa. Because part of it is composed and part improvised, it’s different every time we perform it.” 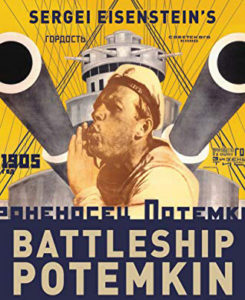 Best known for its iconic “Odessa steps” sequence — which has been echoed by directors ranging from Alfred Hitchcock and Francis Ford Coppola to Brian De Palma, Woody Allen and George Lucas in films like The Godfather, The Untouchables, Brazil, Star Wars: Episode III and the Naked Gun (to name just a few) — Battleship Potemkin has long outlived director Sergei Eisenstein’s original propagandistic intentions to become an undeniable cinematic classic.

“Traditionally, the scores are more of a pastiche—they’ll play long sections of Shostakovich symphonies then change to another one, but not necessarily in time or balance with the narrative,” says Boyle. “We do that too sometimes, but there’s a whole bunch of different styles beyond jazz music to play with.”

But Boyle stresses that while he may be the band leader, it’s his “extremely excited and motivated” students who are in the spotlight with this concert. “I’m the main guide, but it’s their music: when the students bring their own compositions, they’re out front.”

As for why Potemkin, Boyle just offers a sly smile. “Considering everything that’s going on in the world, I thought showing something with a Russian theme would be appropriate,” he says. “I wanted to see if we could make silent films great again.”