Internationally acclaimed artist and new Visual Arts professor Kelly Richardson will be one of five digital media artists featured in the upcoming XL-Outer Worlds large-format film project, which will be shooting at Port Renfrew’s Avatar Grove / T’l’oqwxwat in summer 2018 and released on IMAX screens across Canada in 2019.

The Ontario-born artist has been living in the UK since 2003, and teaching at Newcastle University since 2013, but decided to move to Vancouver Island specifically upon seeing BC’s old-growth forests first-hand during her time as a UVic Visiting Artist in the fall of 2016.

“I was overwhelmed by my experience of those ancient stands, which was a huge influence in my decision to apply for a professorship at the University of Victoria,” says Richardson. “I couldn’t believe those ancient stands still exist at all anywhere in the world, let alone here. My upcoming projects will feature the old-growth forests in this region and I hope I can contribute to efforts to raise awareness about their outstanding beauty and the plight to protect what remains.”

Vancouver Island’s old-growth forests have a long history of artistic representation, whether as the medium and inspiration for centuries of Indigenous works or the iconic paintings of Emily Carr. Known for creating hyper-real digital films of rich and complex landscapes manipulated using CGI, animation and sound, Richardson’s work fuses 19th century painting, 20th century cinema and 21st century scientific inquiries, Richardson creates works with strong environmental themes, asking viewers to consider what the future might look like if we continue on our current trajectory of global environmental crisis. 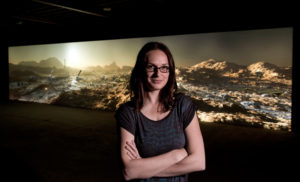 “I want viewers to be immersed within an old-growth forest that’s been shifted into an area of science-fiction, a potential future,” she says about her project. “That perception will allow us to view ourselves in our current situation with some measure of hindsight and clarity, and hopefully realize what we’re doing, where we’re headed, and why.”

The XL-Outer Worlds project celebrates the 50th anniversary of the IMAX, a Canadian invention, and Richardson’s film will be shot by Christian Kroitor, the grandson of IMAX inventor Roman Kroitor. Featuring four other Canadian media artists (Michael Snow, Oliver Husain, Lisa Jackson, and Leila Sujir), the commission focuses on short films creating a larger-than-life landscape that forms an outer world.

Highly in-demand as an artist, in 2017 Richardson was involved in 14 solo and group exhibitions across Canada and in China, France, the UK and the US. Her works have been widely acclaimed in North America, Asia and Europe, and have been acquired by the National Gallery of Canada, Art Gallery of Ontario, and Musée d’art contemporain de Montréal, as well as by museums around the world.

Her video installations have been included in the Toronto International Film Festival, Sundance Film Festival and she was previously honoured at the Americans for the Arts National Arts Awards alongside Robert Redford, Salman Rushdie and fellow artist, Ed Ruscha.

Richardson’s old-growth project will be created with the participation of the Ancient Forest Alliance (AFA) who, together with the Port Renfrew Chamber of Commerce, spearheaded the protection of Avatar Grove — called T’l’oqwxwat by the local Pacheedaht First Nation — which is home to one of the most spectacular and easily accessible stands of monumental old-growth trees in BC.

The campaign to protect Avatar grove, spearheaded by the AFA and the Port Renfrew Chamber of Commerce — a ground-breaking alliance of environmental activists and the local business community — has significantly fueled a provincial movement of businesses, labour unions, city and town councils, and environmental groups calling on the British Columbian provincial government to protect old-growth forests and to ensure a sustainable, second-growth forest industry. 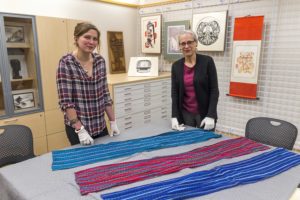 From large lectures and working with TAs to a lack of one-on-one time with professors, there’s no question first-year classes can seem overwhelming to students. But the Department of Art History & Visual Studies is looking to broaden first-year opportunities with both a new classroom and a new class concept: AHVS 101 — a seminar focusing on art, images and experience — launches this month and will be anchored in the department’s new art collections classroom.

“The idea is to create a context in which students transitioning to the university can have an experiential education by interacting with the instructor and their peers in a small group,” explains AHVS professor and course creator Victoria Wyatt. “My job is to create an environment that encourages them to engage actively.” 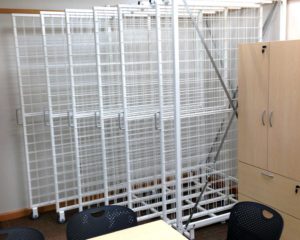 Created with release time made possible by UVic’s Division of Learning and Teaching Support and Innovation and her department, AHVS 101 is open to just 20 students from any faculty and is already proving popular: the debut semester filled up fast, and has a healthy waiting list.

Wyatt notes that first-year students are hoping for something beyond the traditional “sage on the stage” model, where they sit passively while taking lecture notes. “They used to rely on the instructor as a source of information . . . now they look it up on their smartphones,” she says. “Rather than receiving information from an authority, they want to play an active role in navigating that information, actively discussing it. My goal is to give them some tools that will be transferable to whatever discipline they end up majoring in.”

Conceptually, AHVS 101 not only reflects changes in the K-12 education model but also provided the opportunity to create a new learning environment. Featuring purpose-built display and storage cabinets, pull-out painting racks and hanging wall, a dedicated print cabinet and rolling furniture for a flexible learning environment, the art collections classroom will allow students to engage with the paintings, prints, sculptures, and other objects in UVic’s 19,000-plus Art Collection in an entirely new way. 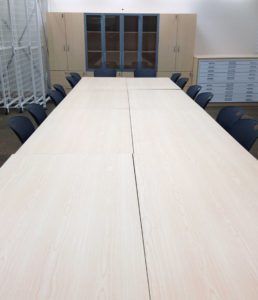 “As one of the leading world art history departments in the country, the new classroom gives our students the opportunity to work directly with the UVic Art Collection,” says AHVS chair Erin Campbell. “[Wyatt’s new class] was designed with the room in mind, and I believe it will be the first small-numbers, seminar-style class to be offered to first-year UVic students.”

As well as other AHVS courses, the new room will also be used for the department’s new Museum Studies minor, Fine Arts classes, and by Legacy Gallery’s art educator. “The classroom will also provide an inviting space for community members to work alongside AHVS faculty members and students with artworks from our collections,” notes Campbell.

Until now, art works had to be transferred back and forth between campus and either downtown’s Legacy Gallery or the storage facility at Queenswood, which is risky and expensive; now, work can simply be left in the room, safely stored and ready to be used. “Because we have to be really careful of security and conservation requirements, this creates an opportunity to make better use of the Legacy art collection and to have students engage with artworks much more intimately,” says Wyatt.

She also feels increased visual literacy is essential for first-year students given the diverse contexts in which we encounter art and images today. “I’d like them to gain experience in how to think about and manipulate visual images in different contexts so they develop greater acumen in looking at websites. How would they use the artwork if they’re a curator at a gallery, for example, or using it as a background in retail, or putting a banner photo on a website or a thumbnail on social media? How would they photograph it? What would they say about it?”

The art collections classroom is one of two new spaces unique to the department and UVic: also new this year is the Fine Arts interactive media lab, designed to support the growing strength of AHVS’s Visual Studies stream. 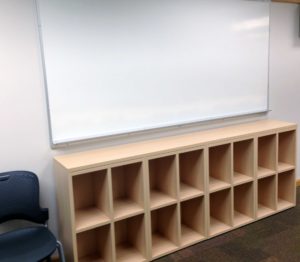 Wyatt, the 2017 recipient of the Fine Arts Award for Teaching Excellence, feels the new course is a perfect fit both for students and herself.

Interested in finding out more? An open house of these new interactive learning spaces will be part of UVic’s Ideafest in March.