Rising Canadian literary darling and one of the Writing department’s most amazing recent undergrads, Eliza Robertson will be launching her debut short story collection Wallflowers in Victoria on Thursday, August 21. 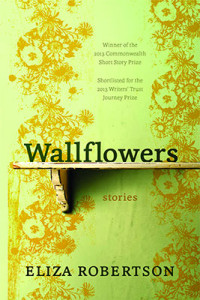 Described by publisher Penguin as “quirky and masterful, Wallflowers is a bouquet of unconventional delights from a powerful new voice.” And if that seems like high praise, consider that Robertson was also named to National Post‘s list of “The 25 most anticipated (Canadian) books of 2014.”

More from Penguin: “Robertson has created a cast of unique and wholly engaging characters. Here there are swindlers and innocents, unlikely heroes and gritty survivors; they teach us how to trap hummingbirds, relinquish dreams gracefully, and feed raccoons without getting bitten . . . . Robertson smashes stereotypes even as she shows us remarkable new ways of experiencing the world—and of relating to our fellow human beings.”

Born in Vancouver, Robertson was a clear standout here in the Writing department. Already a talent to watch before she graduated in 2011, Robertson picked up The Malahat Review’s 2009 Far Horizons Award, won the 2010 PRISM International fiction contest, was shortlisted for 2010’s acclaimed Journey Prize, and was also one of the student creators of the 2011 Leo Award-winning web series, Freshman’s Wharf. Not bad considering her original major was political science and she didn’t even transfer to creative writing until her third year at UVic. 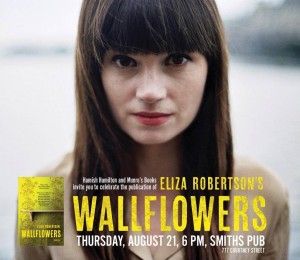 She then went on to pursue her MA in Prose Fiction at the University of East Anglia, where she received the Man Booker Scholarship and the Curtis Brown Prize for best writer. In 2013, she won the Commonwealth Short Story Prize and was a finalist for the Journey Prize and the CBC Short Story Prize.

Check out this quirky interview with Robertson on the 49th Shelf site.

Eliza Robertson launches Wallflowers at 6pm, Thursday August 21, at Smiths Pub, 777 Courtney Street. Come for the reading, stay for the beer—and take home a great new book! Find her on Twitter at @ElizaRoberts0n.

Back to the future

It’s the typical sessional’s dilemma—what to do with all that course material you so painstakingly prepared once your course is over? 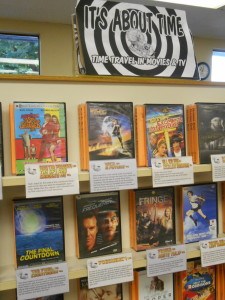 A crash course on time travel

With a selection of 42 films and television shows in a variety of genres offering a romp across the time-space continuum, word is the wall has been quite popular with Pic A Flic’s loyal customer base. (And we’re sure it’s just a coincidence that the Victoria Film Festival‘s annual Free B-Film Festival kicked off on August 1st with the campy time-travel classic Bill & Ted’s Excellent Adventure.) 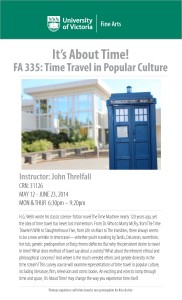 In fact, this is the second time that Threlfall has been a guest programmer for Pic A Flic: to mark the 50th anniversary of the James Bond film franchise in 2012, he assembled a selection of films that never would have been made without the influence of Bond. (Think The Incredibles, the Bourne series, the hilarious French series OSS-117, etcetera.)

Indeed, one of the reasons Pic A Flic has managed to survive in the digital direct era is not only because of their knowledgeable staff and fantastic selection, but also because of their relationship with their loyal customer base. Much like a favourite independent book store or record shop, it’s important for film fans to help keep Pic A Flic afloat.

But if you don’t have the time (ha!) to rent a movie right now, here’s the master list for future reference: 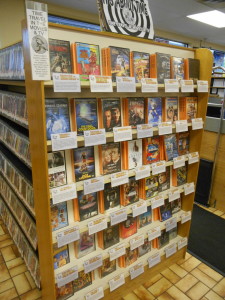 The Twilight Zone: “Walking Distance”, Hot Tub Time Machine, The Time Machine (1959), The Time Machine (2002), Time After Time, Warehouse 13: “Time Will Tell”, Back to the Future (1, 2, 3),Frequency, Meet the Robinsons, Austin Powers: The Spy Who Shagged Me, Timeline, Army of Darkness, Harry Potter and the Prisoner of Azkaban, La Jetee, 12 Monkeys,Peggy Sue Got Married, Star Trek: “The City on the Edge of Forever”, Heroes, Life on Mars, Donnie Darko, Les Visiteurs, Just Visiting, The Girl Who Leapt Through Time, Triangle, Slaughterhouse Five, Timecrimes, Safety Not Guaranteed, Source Code, Primer, About Time, The Prince of Persia: Sands of Time, Black Adder: Back and Forth, Quantum Leap: “The Color of Truth”, Being Erica, Southland Tales, Time Bandits, The Navigator, Fringe: “White Tulip”, The Terminator (1, 2, 3, 4), Free Birds, The Time Tunnel, Bill & Ted’s Excellent Adventure, Cosmos, A Brief History of Time, A Connecticut Yankee in King Arthur’s Court, Kate & Leopold, Star Trek: The Next Generation “All Good Things”, The Simpsons “Time and Punishment”, Doctor Who: “The Doctor’s Wife”, Next, Source Code

Threlfall’s time-travel selections were up throughout July and will likely be on view until mid-August. If you’re a time travel fan, be sure to pop down to Pic A Flic at 328 Cook Street and peruse the selection. 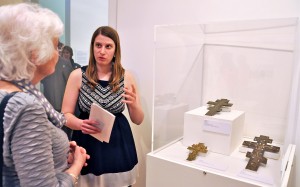 If you haven’t been to Heaven yet, you’ve still got time. No need to bother St. Peter, however—simply pop into the Legacy Art Gallery Downtown for the final week of the  exhibit Windows Into Heaven: Religious Icons from the Permanent Collection.

Running through to Saturday, August 9, Windows Into Heaven is a result of the graduate research of History in Art MFA and exhibit co-curator Regan Shrumm.

Featuring Christian Orthodox icons and crucifixes from the permanent collection of the Legacy Gallery, this exhibition examines religious, historical, and cultural meanings past and present. “A lot of people don’t know what icons are or what they’re used for,” says Shrumm, who originally started exploring the Legacy’s collection for the Jamie Cassels Undergraduate Research Award in 2012. 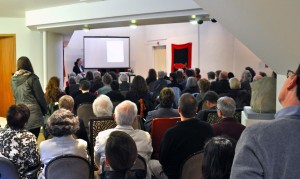 Frequent readers of this blog may well remember Shrumm’s name as the winner of the 2013 Victoria Medal—awarded annually to the student with the highest GPA in the Faculty of Fine Arts. Describing her as “a remarkable student” with “a lively, vibrant spark,” History in Art chair Dr. Catherine Harding noted Shrumm “made these precious items come alive through her focus on their materiality and their special relationship to other artistic traditions, such as the close visual connections between Greek Byzantine and Russian religious culture.”

Windows Into Heaven is co-curated HIA professor and recently appointed Associate Dean of Fine Arts, Dr. Evanthia Baboula, who also led Shrumm’s directed studies course which led to the creation of this popular exhibit. Over a hundred people turned out for the curator’s talk and tour back in April, showing the continuing interest in this kind of religious iconography. 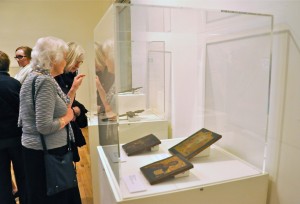 Just a few of the icons on display

The 18th and 19th century icons—created from egg tempera, enamel and silver metalwork—are from the eastern Christian tradition and show how religious imagery maintained a central role in orthodox Christianity. Many of the icons are from the donated collection of Dr. Bruce and Mrs. Dorothy Brown.

Icons were venerated in churches, private homes or during a journey to provide protection to body and spirit. Images of saints, Christ and the Virgin that date back to the Byzantine tradition, the medieval empire of Constantinople, are also a concrete remnant of how the religious communities of imperial Russia built on these traditions to create a recognizable, yet distinctive and lively art.

“The icons in this exhibition are similar in age and importance to others found in major galleries and museums worldwide, including the Metropolitan Museum, the British Museum, and the Ashmolean,” 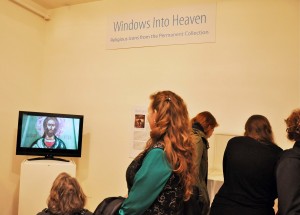 Viewers at the exhibit

Windows Into Heaven must close on August 9 at the Legacy Art Gallery Downtown, 630 Yates. Admission is free and the gallery is open 9am to 4pm Wednesday to Saturday.