School of Music professor, screenwriter, filmmaker and all around busy guy John Celona just returned from having a “terrific experience” at the 2012 California Film Awards, where his screenplay for an  unproduced sci-fi black-comedy thriller called Lady Smoke earned a Diamond Award in the screenwriting category. 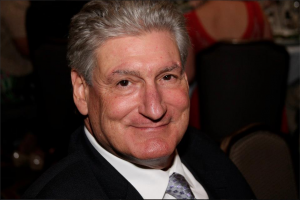 The awards were held on January 26 at the swish Bahia Hotel in Mission Beach, San Diego. “They really do it up right,” says Celona. “First-class, ballroom, formal dress, podium speeches, representation, studio execs like Harvey Weinstein. I was floored the first time and now this.”

Celona picked up honorable mention at the same awards two years ago for his neo-noir thriller Nightfreight—check out his OpenFilm channel for a peek at on that. 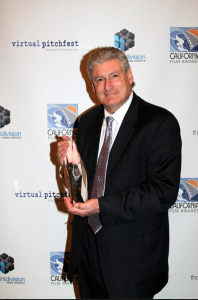 Celona with his Diamond Award

But if you’re wondering what exactly a sci-fi black-comedy thriller is, here’s how Celona describes Lady Smoke: “The abduction of a media star by an extraterrestrial beauty creates international trouble.”

Want more? (Of course you do!) Here’s the screenplay synopsis: “It’s midnight in San Francisco at the martini bar up on the 19th floor. Vikki lures Max, the social media billionaire, and plans a daring departure. A sequence of flashbacks and episodes shows Vikki and her two extraterrestrial companions muffing their shuttlecraft landing in the financial district and their adventures in North Beach. An emergency transmission to the rendezvous starship causes a blackout. The US thinks it’s a foreign cyberattack and enlists Max’s company AURA to retaliate. Max codes the virus ‘Lady Smoke,’ a sexy gaming avatar that looks like Vikki. The extraterrestrials try to undo the damage yet events keep unfolding: UFO encounters, telepathic interference and a covert operative all intersect.”

According to their site, the California Film Awards supports the craft of screenwriting by “discovering and recognizing important new talent” from around the globe through their annual screenplay competition; winning screenplays “are awarded based on the quality and originality of the work.” Sounds like Celona’s Lady Smoke was an ideal match!

And nice that daddy Celona is back in the news, given all the hubbub over daughter Marjorie Celona’s Giller-nominated debut novel, Y, which recently made the prestigious UK Waterstone’s Eleven list (alongside fellow Writing grad D.W. Wilson). 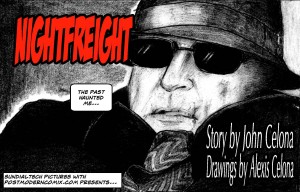 Speaking of Celona’s Nightfreight, fans will also be glad to hear that it’s almost complete as a 600-page graphic novel, soon to be published in both hard copy and as an e-book. Artist Alexis Celona has kindly provided the following sneak peeks of the art—enjoy! 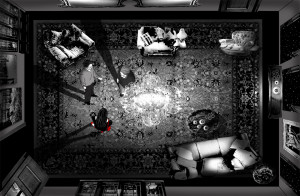 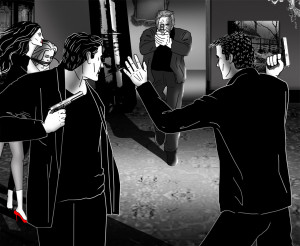 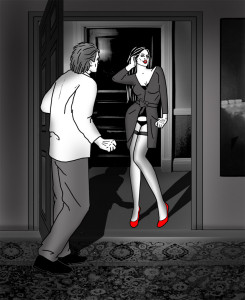 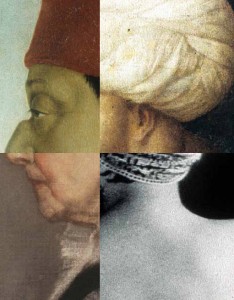 Name the artists, figure out the clue

Think back, way back, before the beginning of the current semester. (I know, it seems like a long time ago, doesn’t it?) Just before the Christmas break, the History in Art department launched their challenging Christmas Quiz—a visual puzzle that was equal parts art knowledge and brain teaser.

Now, the winners have been announced. Congratulations go out to overall winner Emerald Johnstone-Bedell, who won the main prize of a drum painted by Jason Bill, plus runners-up Terry Rodgers and Atri Hatef, both of whom received gift vouchers to the university bookshop.

“It was quite a challenge but I got most of the answers right,” says Johnstone-Bedell, a fourth-year History in Art student who won a beautiful drum, hand-painted by artist Jason Bill. “I like word puzzles.” 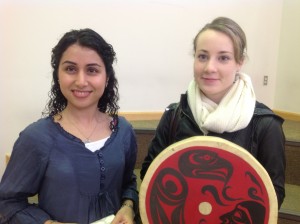 While she was familiar with some of the art, Johnstone-Bedell says she could “generally assume what style/culture/time it belonged to” when she didn’t know it. And while she didn’t always need all the clues to solve the word puzzles, she did search the Fine Arts image database in DIDO when she did need some assistance. What about next year’s quiz? “If I do my Master’s at UVic, I would probably do it for fun next year, but someone else should get a chance to win a cool prize,” she says.

Runners-up Hatef and Rodgers are also HIA students, each of whom won gift vouchers to the UVic Bookstore. Hatef is a first-year Master’s student and Rodgers is in the Honours BA program, hoping for acceptance into the Master’s this September. “I answered seven questions out of the eight,” says Hatef, who found it “really challenging.” (No kidding!) She says she knew some of the images, but looked to both the library and the internet for others. “It was really funny and exciting.” 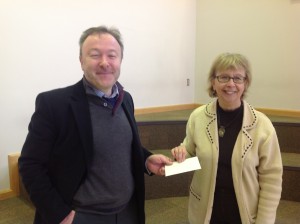 Rodgers pulled six out of eight correct answers and says she was “thrilled to win as runner-up!”  When asked if it was a challenge, Rodgers agreed it was. “I had some answers right away within each question, but often had to really search for the complete answer.”

She also used DIDO, as well as other popular online sites like ARTstor, Metropolitan Museum of Art, and the website for London’s National Gallery. Rodgers is also keen to try again next year. “Absolutely!!” she says. “It was great fun and I was determined to finish as much as I could. Next year I’ll start earlier!”

For complete answers to the quiz, please click here.

If you think a piece of music sounds the same when played by different orchestras around the world, you’re not listening internationally. Which, in a musical nutshell, is exactly what School of Music professor Ajtony Csaba had in mind when he approached UVic’s Learning Without Borders Program (LWB), which supports internationalization of the curriculum. 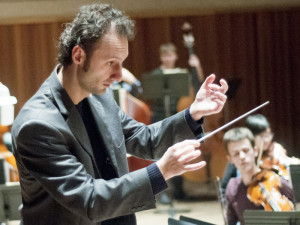 “When I came to UVic to work with the orchestra, I saw this ensemble had a lot of potential for development,” he explains. “The students, and the audience, could benefit by introducing them to several new international approaches to music.”

“International” is the perfect word to describe the career of the Romanian-born Csaba—not only did he train in Vienna and Budapest, but he has also conducted orchestras in Hungary, Austria, China and Syria before joining the School of Music in 2010.

“Each orchestra has its own playing style,” he notes. “The London Philharmonic Orchestra, for example, has its own style that is different from the Chicago Symphony, the Vienna Philharmonic or the Beijing Central Conservatory’s orchestra—so it will be very beneficial for our students, to learn a stylistic approach reflecting orchestras worldwide.”

Csaba’s idea was to create a four-year course more reflective of what he describes as “the multicultural state of music repertory . . . and orchestra performance and training traditions around the world.” The result is his “Internationalization of the Orchestra” course, which dovetails perfectly with the Learning Without Borders goal. Csaba is the second School of Music professor—along with Jonathan Goldman—to benefit from the LWB curriculum development fund.

With the help of this grant, we can invite guest artists from specific musical cultures, who will demonstrate the differences in these performance traditions and stylistic regions,” says Csaba. “That will provide our students with new tools that help identify and interpret in a reflective way, say, French romantic orchestral music differently than Russian romantic music.”

Think of it like translating an international novel: while the story will be the same in different languages, the word choice and tone are going to be slightly different from country to country.

“If you listen to two interpretations of one piece of music one after another, it’s obvious that something is different,” explains Csaba. “The differences one can hear in a performance are related to the ensembles—this trombone player in Spain might have a slightly different tone than the one in Russia, whose training is different. The same conductor can work with each ensemble, with the same concept, on the same repertory, but it will still sound slightly different.”

Come March 1, you can hear some of Csaba’s theories in action when the UVic Orchestra performs Dances [- and a bit of counterpoint-] without borders at the University Centre. “We will play two separate sets of dances—Rimsky-Korsakov’s Capriccio Espagnol Op. 34 and Dvořák’s Slavonic Dances Op.46—which are both cross-cultural,” says Csaba. “Dvořák is Bohemian, and ‘Slavonic’ references the folklore of the whole Slavonic population, while Rimsky-Korsakov is Russian, so he’s referencing another country entirely. They are both composing in a dance tradition which is not only related to their own culture.”

But can that sense of internationality truly be taught? “If students are exposed to many different ways of interpreting music, they will be able to go to another country and listen with a referenced ear,” Csaba concludes. “They can then compare and make a derivation from what they’re used to—and they will understand how it is different and how to reproduce it. This is an important experience preparing artistic collaborations in a multicultural society.”

ABOUT LEARNING WITHOUT BORDERS

UVic’s Strategic Plan highlights the goal of internationalizing the curriculum to prepare students for their role as global citizens. To support this goal the Provost’s Office makes available resources, through the Learning without Borders (LWB) initiative, designed to support faculty members and academic units seeking to integrate international elements into their undergraduate curriculum. 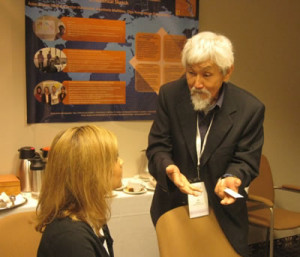 Dr. Ed Ishiguro from the Learning and Teaching Centre at UVic talks with an attendee

The vision for the initiative, now in its second year, is to create a growing community of multi-disciplinary faculty members and students involved in the internationalization of the curriculum, who are willing to share their experiences and inspire others through their leadership in this area. The hope is that the lessons learned will support the development of global mindsets and cross-cultural understanding of not just students, but the entire university community.

A pre- and post-survey, Global A’s, was constructed to measure students’ self-reported changes in global Awareness, Attitudes and Actions as a result of taking an LWB course. These were compared with results from a “control course” that had not been exposed to LWB design principles. Preliminary results are extremely positive and indicate that those students participating in the LWB-enhanced courses reported substantial positive changes in global knowledge, taking others’ perspectives, and actively seeking out information about other cultures, compared to those students in the control course who largely reported no changes.