The Malahat’s Side of West

It’s a double-literary launch event Tuesday night when both The Malahat Review and the Department of Writing undergraduate journal This Side of West team up to share a night of words and readings.

While the Malahat is primarily pushing their latest issue (#178, available at the cover price), they’ll also have special back-issues on sale for just $1 each—including #170 featuring Lorna Crozier,

Patrick Lane and Aesthetic Kinship, #165 focussing on “The Green Imagination” and #160: “Robin Skelton: Marking our Anniversary in Tribute.”

Don’t miss out on the special night celebrating talent both established and emerging, starting at 7pm on Tuesday May 15 at The Well, 821 Fort. Admission is free . . . so be sure to pick up a copy of both issues! 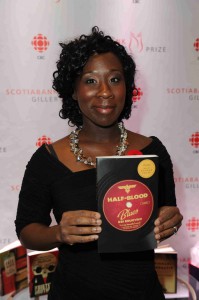 Esi Edugyan at the 2011 Giller Prize

Chalk up another win for long-lasting local literary luminary Esi Edugyan, who took home the Ethel Wilson Fiction Prize at the BC Book Prizes on the weekend for her sophomore novel, Half-Blood Blues.

Edugyan’s novel of persecuted black jazz musicians in WWII-era Occupied Europe triumphed over Michael Christie’s The Beggar’s Garden, Frances Greenslade’s Shelter and Once You Break a Knuckle by Department of Writing graduate and next-big-thing author D.W. Wilson. Ironically, the post-earthquake Victoria novel Into That Darkness by Edugyan’s husband Steven Price—also a Writing grad and frequent sessional instructor in the department—was also nominated in the same category.

In addition to the Wilson fiction prize, the BC Book Prizes also include the Hubert Evans Non-Fiction Prize (won by Charlotte Gill for her tree-planting memoir Eating Dirt), the Dorothy Livesay Poetry Prize (crawlspace, by John Pass, which beat out The Collected Poems of Patrick Lane by retired Writing department superstar Patrick Lane), the Roderick Haig-Brown Regional Prize (The Chuck Davis History of Metropolitan Vancouver, by the late Chuck Davis), the Sheila A. Egoff Children’s Literature Prize (Blood Red Roadby Moira Young), the Christie Harris Illustrated Children’s Literature Prize (When I Was Small by Sara O’Leary,illustrated by Julie Morstad) and the Bill Duthie Booksellers’ Choice Award (which also went to The Chuck Davis History of Metropolitan Vancouver). Previously announced was the Lieutenant Governor’s Award for Literary Excellence, which went to Salt Spring Island poet and author Brian Brett.

Hosted by author and comic Charles Demers at a gala in Vancouver on Saturday May 12, the BC Book Prizes each carry a cash prize of $2,000, plus a certificate . . . and, of course, bragging rights. 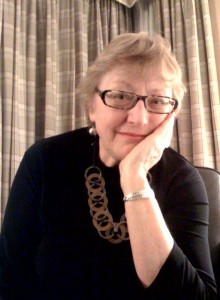 While it won’t get her an Oscar (or even a Genie), Dr. Lynne Van Luven has officially been announced as the Acting Dean of the Faculty of Fine Arts, for the period of time from July 1, 2012, to June 30th, 2013. Van Luven will, of course, be stepping in for Dean Sarah Blackstone, who is taking a year sabbatical.

“Dr. Van Luven is a recognized scholar and educator, with substantial administrative and professional experience,” says UVic Provost and Vice-President Academic Reeta Tremblay in her official announcement. “Dr. Van Luven will be a strong leader and advocate for the Faculty. She has received a positive ratification of 95.0% from faculty and I very much look forward to working with her.”

The 95% popular Dr. Van Luven is currently on tour in Ontario, promoting the new book she co-edited, In The Flesh, and attending the Canadian Creative Writers and Writing Program conference, where she’ll be chairing a couple of sessions and talking about In The Flesh. Also in attendance at CCWWP are Department of Writing chair Bill Gaston and Writing sessional instructor Christin Geall. 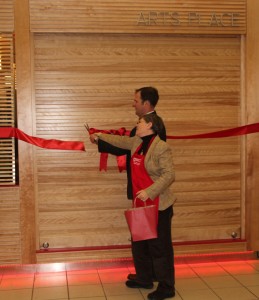 And . . . we’re officially open, as Sarah Blackstone and Jim Dunsdon cut the ribbon on Arts Place

Tasty things come to those who wait, as we all found out when Arts Place officially opened this year. Although in operation since last fall, we had to wait for the final design tweaks before officially kicking it off, which Dean Sarah Blackstone and Associate VP Student Affairs Jim Dunsdon did when they cut the ribbon on Arts Place back in February.

While Arts Place has unquestionably proved popular with Fine Arts staff and students, it’s also been successful in its mission to give the faculty a place to meet and mingle. Thanks go out to all those who made it happen, notably Cathie Patrick, Raubyn Rothschild and Rebecca Simmons in Facilities Management, Dan Lissowski and Craig Jenkins of the Carpentry Shop, the whole team in Food Services, plus architects Brian Lord and Tony James of the Warner James firm.

The Wood Works! trophy . . . made from BC wood, of course

And in case you missed it in the most recent issue of the Fine Arts faculty newsletter, architect Tony James recently took home the Interior Beauty Design award for his work on Arts Place at the annual Wood Works! BC 2012 Wood Design Awards. A national industry-led initiative of the Canadian Wood Council, the annual Wood Design Awards honours excellence in wood-based projects and recognizes the people and organizations pioneering and achieving this objective. When it came to Arts Place, the jury praised James for using wood to solve the project’s design challenges—including designing the cafe as a free-standing sculptural object,as well as creating a transparency effect to allow daylight to continue to shine into the lobby and give it an after-hours lantern-like glow. (If you’re curious, Arts Place’s distinctive look comes from a mix of Western birch, birch plywood and custom millwork to give it a contrast in warmth, colour and texture.)

Hot on the heels of last week’s BFA exhibit BLiNK comes the 2012 MFA Thesis Exhibition. Featuring the work of seven emerging contemporary artists, all of whom are completing their Master of Fine Arts degree in Visual Arts at UVic, this exhibit is always one of the most anticipated shows of the year. 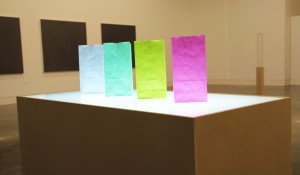 Each of the artists—Steven Brekelmans, Heather Carey, Jessica Karuhanga, Dong-Kyoon Nam, Sasha Opeiko, Anne J. Steves and Matt Trahan—has a drastically different approach to making art, reflective of the various nature of contemporary art practice in the world at large. With an entire room in the Visual Arts building dedicated to each artist, the MFA exhibit differs from the BFA exhibit in that it allows a more focused, more dedicated look at their work. 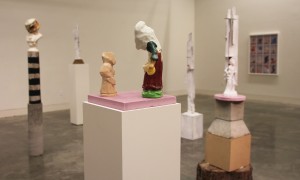 Steven Brekelmans’ “Made For These Times”

“These graduate students have come together from different parts of Canada and the world and have taken two years out of their lives to devote to art making,” explains associate Visual Arts professor Lynda Gammon. “Each student took up residency in one of the studio spaces and each has established a practice and a mode of working. At the end of the two years, these student works are now sufficiently tested and completed and are ready to move from the studio into the public arena of the gallery.” 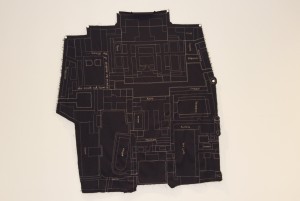 From Anne J. Steves’ “Catching Up The Slender Thread”

Just as the other Fine Arts departments have their own graduating recitals, concerts, theatrical performances or readings, this is the chance for the campus to see what the Visual Arts graduate students have achieved during their time in the program. “This is a thesis exhibition and, as such, each student is required to defend their exhibition before a committee comprised of a chair, a supervisor, two committee members and an external examiner,” continues Gammon. “This work is the graduate student’s independent research; it represents new ways of thinking. As such, the works in their exhibition present new knowledge. After much critical discussion and testing against contemporary theoretical discourse and practice in their area of study, this new work is now ready for critical reception in the larger world of public galleries and museums.” 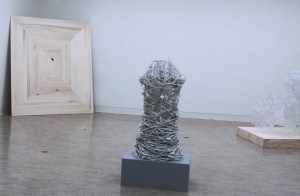 From Dong-Kyoon Nam’s “Forget Me Now”

More than just compiling a body of work, however, Gammon points out that the MFA students have also learned how professional artists live and work within the complex world of contemporary art. “They have gained experience conducting studio visits with visiting artists, learned how to talk critically about their work and the work of others,” she notes. “They have gained confidence and experience writing about their work. 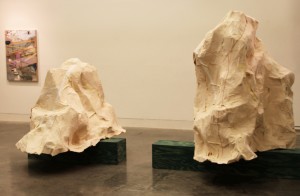 From Heather Carey’s “8 Points in Space”

“For these students, this two years has been a space of interchange between art objects, activities and people,” she continues. “They have taken courses, participated in seminars and been immersed in a diverse and interrelated dialogue, through critical discussion with faculty members and artists visiting from across Canada, the United States and Europe. They have had the opportunity to teach undergraduate students under the mentorship of regular faculty members in the department; this has prepared them for teaching positions at the university level.” 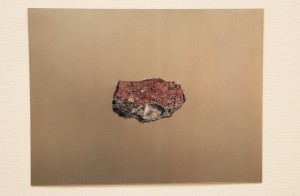 Ultimately, Gammon expects great things from this year’s batch of  graduates. “As our past MFA’s have exemplified, the work these students have completed will go on to be exhibited in major contemporary art galleries and museums in Canada and elsewhere,” she says. “As such, our graduate students and their work become a part of a larger contemporary arts scene and will become a part of a larger dialogue around artistic practice.” 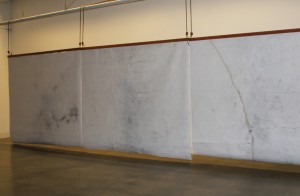 The MFA Thesis Exhibition runs through to Saturday, May 12, in UVic’s Visual Arts building. It’s open for viewing Monday to Friday 10 am – 5pm, Saturday 1-4 pm. And it’s free, of course!