Not that there’s anything wrong with the piano as we know it, but internationally celebrated sound sculptor, composer and inventor Trimpin has never been one to simply accept things as they are. Now, the Seattle-based Trimpin will be bringing his latest innovation to Victoria this year 2012 with a project titled (CanonX+4:33=100). 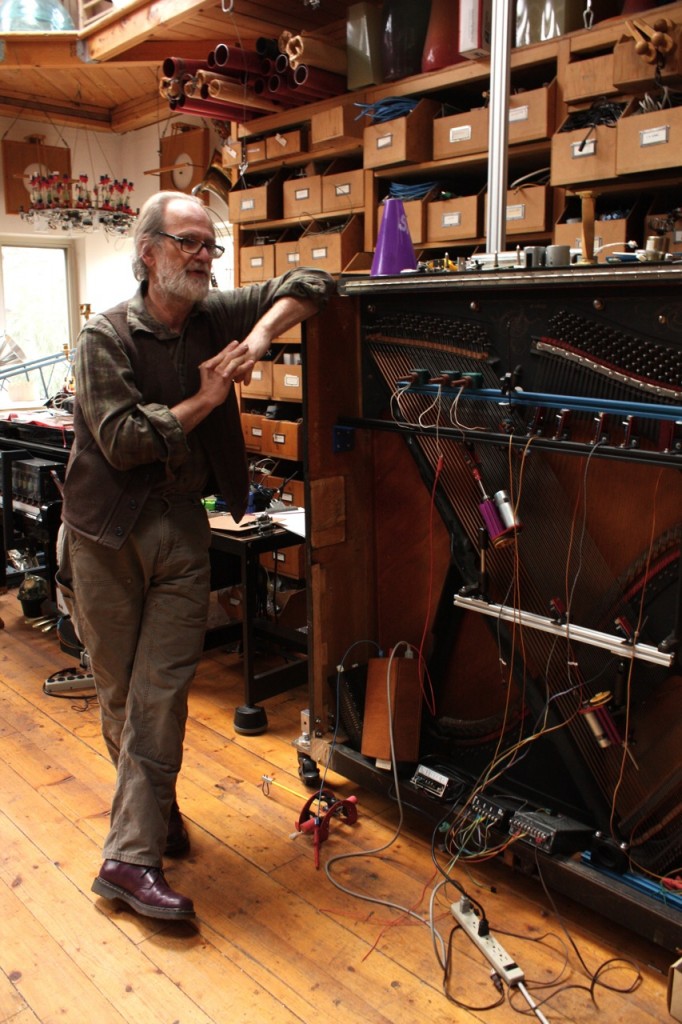 In collaboration with Open Space and Dr. Andrew Schloss (head of our Music and Computer Science program), a team of emerging sound engineers, musicians and visual artists from UVic will have the opportunity to work directly under Trimpin’s mentorship while assisting with the creation and installation of the work, scheduled to debut at Open Space on March 16.

With 2012 marking the centennial celebration of some of the most influential composers of the last century—namely John Cage and Conlon Nancarrow—(CanonX+4:33=100) will celebrate a continuum and extension of the important work of both composers. Combining ancient concepts and methods with the latest in digital technology, Trimpin will give new life to an array of transformed abandoned pianos, by constructing visually dynamic and aurally stunning acoustic and electroacoustic sculptures and automatons out of their carcasses.

“The pianos will be ‘prepared’ with mechanical actuators—small robotic devices to play the piano strings in a way which both composers, more than a half century ago, started to experiment with, compose, and perform,” Trimpin explains. “With the tools of today’s technologies, this experimentation can be extended to the next level of investigation.” 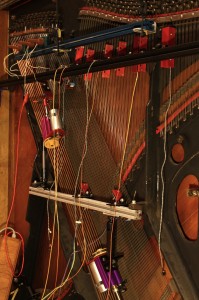 Believing in our capacity to experience sound visually, Trimpin will accentuate this concept with the use of video cameras and sensors to translate movement and colour into gestures that activate the instruments.

Trimpin will visit UVic from January 17 to 20 to introduce the project, conduct workshops with participants, and host a free screening of Peter Esmonde’s 2009 documentary, TRIMPIN: the sound of invention (8pm January 18 in Visual Arts room A146, featuring the music of the Kronos Quartet). He will then return in March to install (CanonX+4:33=100) at Open Space, as well as present an artist talk and perform with the UVic collective, MISTIC. Until the close of the installation on April 28, the UVic team will lead demonstrations and workshops, as well as have the opportunity to develop unique methodologies for activating and “performing” the installation as an enormous musical instrument. 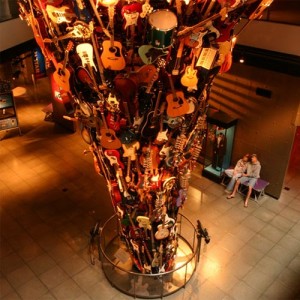 Enormous instruments are nothing new to Trimpin, who is perhaps best known in the Pacific Northwest for his towering instrumental sculpture “IF VI WAS IX: Roots and Branches,” which dominates the main level of Seattle’s Experience Music Project Museum. Constructed from more than 500 musical instruments and 30 computers, “Roots and Branches” offers a dynamic, engaging and historical journey into the origins and evolution of American popular music—thanks to the earphone-equipped computer touch-screens that guide visitors through various sound permutations the sculpture is capable of realizing.

After years of formal training in brass and woodwind performance, the German-born Trimpin completed an apprenticeship in electrical engineering and later earned a Master’s degree in social pedagogy. As he explains on the Experience Music Project website, “I had to study what goes on physically when different brains are working. I needed all this information to get to the point where I could execute my ideas. It wasn’t available in literature, because none of these books existed. So from the beginning I always had to do it on my own.”

One of the most stimulating and inventive forces in music today, Trimpin’s  (CanonX+4:33=100) will skew your everyday assumptions about sound and technology and engage your senses of perception, surprise, and joy, in an extraordinary and intricate audio-visual experience unlike any other.

—Kristy Farkas and John Threlfall, with files from the EMP Museum

Don’t miss the free screening of TRIMPIN: The Sound of Invention—featuring Trimpin himself as host—at 8pm Wednesday January 18 in room A146 of UVic’s Visual Arts building. 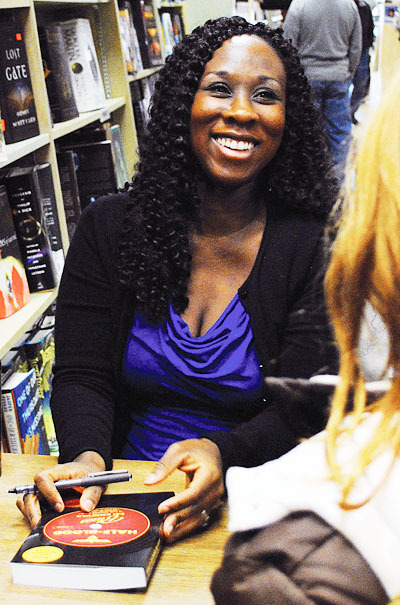 In the no-big-surprise department, former Writing instructor, celebrated alumna and 2011 literary It-girl Esi Edugyan appeared in a number of year-end best-of lists for her Giller Prize-winning and Man Booker/ Governor General/ Writer’s Trust-nominated sophomore novel, Half-Blood Blues. (Heck, my mom even got it for Christmas!)

Adrian Chamberlain of the local Times Colonist newspaper noted that “Victoria’s writerly reputation was confirmed dramatically” by Edugyan’s “astonishing year,” Mark Medley of the National Post named her one of the two Canadian authors of the year (along with fellow multi-nominated writer Patrick DeWitt) and John Barber of the Globe and Mail said that, with the collapse of publisher H.B. Fenn and its Key Porter imprint, “2011 began ominously for independent Canadian publishers and then quickly turned to roses. Rescued from the Key Porter wreckage, Half-Blood Blues became the most popular title ever published by Thomas Allen & Son, with 100,000 copies on the market and a stable perch overlooking James Patterson and Stephen King on Canadian bestseller lists.”

Quill and Quire also reports it was the most popular title in the Toronto Public Library in 2011, with Michael Ondaatje’s The Cat’s Table in second place and DeWitt’s The Sisters Brothers rounding out the top three. Alas, if you were hoping to check it out of the Greater Victoria Public Library system, you’d better get in line—as of this post, there are 399 holds on 82 copies . . . but you could always reserve Edugyan’s debut novel, The Second Life of Samuel Tyne, which currently only has 41 holds on five copies.

Edugyan also appeared on the year-end cover of local entertainment weekly Monday Magazine, where writer Reyhana Heatherington said she “learned from some of Canada’s top literary stars” while studying here at UVic.

“I studied with so many great teachers,” Edugyan is quoted as saying. “Patrick Lane was my first great teacher. I found myself following poetry because he was so inspiring. The calibre of guidance was so amazing. Jack Hodgins, Lorna Crozier, Bill Gaston—such a high level of instruction. They can’t teach you to write if you’re not inclined that way. But what [school] does is cut the apprenticeship time down. Peer reviews prepare writers for working with an editor in a professional capacity.”

And in the January 8, 2012, edition of the Times Colonist, Adrian Chamberlain ran a new interview with Edugyan, a long profile featuring insights from her former Department of Writing instructors, Bill Gaston (“You always say, ‘this one could be the next Michael Ondaatje.’ You can’t predict, but she was one of those”) and Jack Hodgins (who was “amazed at her ability to inhabit the voices of vastly different characters authentically.”) Chamberlain also mentions rumours of a Half-Blood Blues film adaptation, about which a “close-lipped” Edugyan says, while noting there is nothing concrete, “There’s some discussion—yeah, actually.” 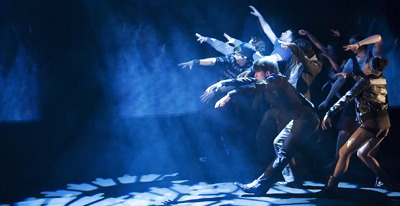 The winners in the 10th annual Critics’ Choice Spotlight Awards were announced on December 29, 2011, and Phoenix Theatre was once again in the top tier with seven nominations and two wins.

David Lennam, critic for CBC Radio One’s On The Island, felt Phoenix had a strong season last year, calling both Twelfth Night and Inside as “both absolutely superb and from complete opposites of the spectrum.” Forced to choose, he came down on the side of Shakespeare and director Hardy, calling her Twelfth Night “the best I’ve seen—full of new ideas and staging.” Former Monday Magazine critic Amanda Farrell-Low also noted that Twelfth Night was “one of the best things I’d seen at UVic in quite some time.”

Among the other Phoenix nominees were Cat Haywood (Costumes, Twelfth Night), Kesinee Haney (Performance in a Community Production, Twelfth Night, Yerma), Inside (Overall Community Production) and both Linda Hardy (Twelfth Night) and David Ferry (Inside) for Direction—a category that was ultimately won by UVic Theatre prof Brian Richmond for his turn at the helm of Blue Bridge Repertory Theatre’s “Who’s Afraid of Virginia Woolf?”

Check out CVV Magazine for the full list of nominees and winners.