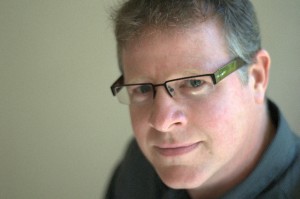 When it comes to symphonic greatness, tuba players likely don’t leap immediately to mind—but Paul Beauchesne (BMus ’88) is about to change all that. Not only has Beauchesne been the principal tuba with the Victoria Symphony for the past seven years, but he was also selected as the 2011 Distinguished Alumni Award recipient for the University of Victoria’s Faculty of Fine Arts.

Beauchesne—one of 11 leading members of UVic’s alumni community recognized for his professional achievements and community leadership—is also a founding member of the Beacon Hill Brass Quintet, serves on the faculty of the Victoria Conservatory of Music and pulls double-duty as the Victoria Symphony’s stage manager, as well as keeping busy at home as a husband to fellow UVic alum Victoria Beauchesne (music director for Fairfield United Church) and father to their eight-year-old son, Louis. But rather than feeling overwhelmed by all this, the good-natured Beauchesne says wearing multiple hats is simply part of the game.

Ironically, Beauchesne credits his time at UVic for his multitasking skills. “That may be the single most important thing I took away from UVic—the idea that, if there’s any way possible, you should always say yes. During my student days, I had my fingers in a lot of different things, and it seems to be a recurring theme—I guess that’s how I‘ve distinguished myself. The longer you are in a place the more you branch out, the more you start making a life out of a whole bunch of disparate things.”

A Yamaha Performing Artist and Clinician, Beauchesne was born in Montreal and grew up all over B.C.’s coast, thanks to his father’s job with forestry giant MacMillan Bloedel; in addition to his time at UVic, he has also studied at the Banff Centre and the University of New Mexico, was a longtime member of Calgary’s Foothills Brass Quintet, spent two years as principal tuba of the KwaZulu Natal Philharmonic Orchestra in Durban, South Africa, and has performed with the Boston Symphony, Sante Fe Symphony, New Mexico Symphony, Calgary Symphony, Vancouver Symphony, Vancouver Ballet Orchestra, Okanagan Symphony Orchestra, Tanglewood Music Center Orchestra as well the NADEN Band, Calgary Jazz Festival Orchestra, the Wild Rose Jazz All Stars and the Band of the Ceremonial Guard.

Busy? You bet. But he’s more than happy to have returned here to make a home for his family in Victoria. “I really enjoyed life on the road before becoming a dad, but leaving my wife and son behind to live out of a suitcase in hotel rooms suddenly wasn’t very enjoyable anymore,” he chuckles.

And does Beauchesne, who studied at UVic under famed tubist Eugene Dowling, thinks the tuba gets the same respect as other symphonic instruments? “I think the expectations of the tuba and tuba players is actually quite low,” he says with a brassy laugh. “The general public is always surprised when they hear someone who can actually play it, compared to what their preconceived notion is. Within the orchestral world, of course, conductors know what the tuba can do, and the standard since I’ve been studying has only gotten higher and higher.”

When asked how he feels about being chosen as the Distinguished Alumni for the Faculty of Fine Arts, Beauchesne is clearly flattered but remains characteristically humble. “I’m not really sure,” he says. “It’s certainly an honour, but I can easily think of other people I went to school with—even in the music department, let alone all of the Fine Arts—who are more, if not equally, deserving.”

Beauchesne pauses, and then laughs again. “It’s hard to be, like, ‘Go me!’ But it’s nice to receive recognition for years of slogging away, even though my slogging isn’t head and shoulders above that of my peers. And I feel lucky to still be working in my chosen profession.”

4 Seasons in One Print 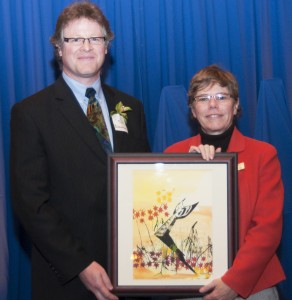 Over the years, the Distinguished Alumni Awards have taken different shapes, and this year’s model is no different. The 2011 award—“4 Seasons,“ an 11×14-inch limited-edition framed serigraph print representing the changing seasons at UVic—was designed by fourth-year Visual Arts major Everett Wong, and was presented to the 11 recipients by university Chancellor Murray Farmer (BA ’68) and UVic Alumni Association President Glenda Wyatt (BSc ’98) at the annual Distinguished Alumni Awards gala on February 11 at the University Club.

Wong says the inspiration for the award came to him “after taking a short walk around campus to find buildings and structures that were emblematic of the ideals that withstand this institution.” He then chose the “simplicity and starkness” of a Japanese print for the actual award. “Drawing parallels between the climates of both our coast and Japan’s, I came to adopt the idea of the four seasons that are both revered both in print form as well as our day-to-day existence,” Wong explains.

Working under the guidance of Visual Arts instructor Megan Dickie, Wong created four different versions of the print reflecting the shifting colours of the seasons. “The other key component was the notion of variation—promoting the idea of the subtleties that make up individuals,” he says. “In the end, it provided and interesting ground for me to test my aptitude as an emerging practicing artisan.“