Unless otherwise bylined, this blog is written by John Threlfall. A specialist in media and popular culture, John was on staff at Victoria’s award-winning alternative weekly newspaper, Monday Magazine, from 1999-2010 as the Arts Editor and in-house theatre critic, eventually moving up to a four-year stint as Editor-in-Chief. 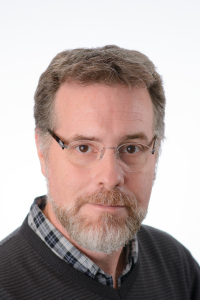 He also spent five seasons as the on-air “walking encyclopedia of popular culture” for CBC Radio One’s Definitely Not The Opera, has been a freelance writer for more than 20 years, worked a decade in live theatre as a stage manager and technical director, and has taught university-level courses on such diverse topics as time travel, the history of the disc jockey, the business of writing, the representation of witchcraft in popular culture, magazine publishing and how to write about popular music. He has been a popular sessional instructor for UVic’s Department of Writing since 2006, and is currently the Communications and Special Projects Officer for UVic’s Faculty of Fine Arts.

A practicing witch for over 25 years, John is also a Wiccan priest, and likes to  spend his free time artfully arranging his James Bond and Orange Crush collections. His wife, Beth, is a busy local artist and his two dangerously charming children may well take over the world one day. If his life was a Broadway show, it would be called Hectic: The Musical!

About the Blog
Faculty of Fine Arts
Research