The late award-winning poet and novelist Patrick Lane will receive one final honour when he is posthumously presented with the European Medal for Poetry and Art on June 7. Beijing-based poet Dr. Zhao Si Fang, vice-president of the award, will make the presentation at a small private gathering of poets. Lane’s wife, Department of Writing Professor Emeritus Lorna Crozier, will receive the award in the garden of their North Saanich home. 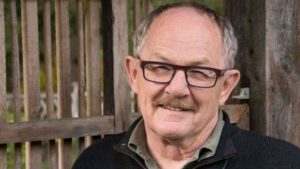 Commonly referred to as the Homer Prize, there has only been one other Canadian recipient in the award’s short history: UVic Writing professor Tim Lilburn, in 2017.

“This is a significant honour,” says Lilburn. “Patrick’s stature as a poet is international as well as national. His work has long been of interest to translators in China and a large ‘selected poems’ collection is now being prepared for release in Beijing in 2020, as a result of the Homer Prize.”

Initiated in 2015, the Homer Prize is a relatively new international award administered by an international chamber with representatives from Poland, China, North Africa and elsewhere. Previous laureates include Ataol Berghamoglu (Turkey), Tomas Venclova (Lituania), Juan Carlos Mestre (Spain) and Tim Lilburn (Canada). Plans to present Lane with the Homer Prize had been underway prior to his passing on March 7. 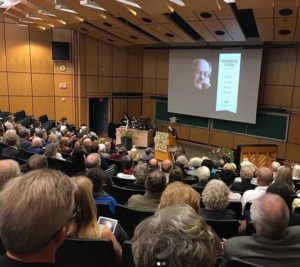 Lane was also posthumously honoured with the George Woodcock Lifetime Achievement Award on April 20 at his memorial service at UVic. With nearly 300 people gathered at the memorial event, Howard White—president of the Pacific BookWorld News Society and a longtime friend of Lane—presented Crozier with the award, a $5,000 cheque and a civic proclamation in honour of Lane. Crozier received the same award the previous year.

“Although our timing with this presentation was just a little too slow, I was able to deliver the news to Patrick while he was still with us,” said White at the event. “I remember his first response: ‘Are you sure you haven’t given me that one already?’ He was really very moved, however, and wrote [the following email] the prize administrator Alan Twigg.”

“It is nice to be associated with George [Woodcock],” noted Lane. “He wrote a chapbook summary of my poetry back in mid-career and compared my verse to poets such as Yeats, which, God knows, was excessive in the extreme, but still nice to imagine it might echo some small qualities of such a master, a poet I admired when I was young and still do . . . . Thank you for this award. It is most kind.”

Described as “one of Canada’s most renowned writers,” Lane’s death made headlines in media outlets nationwide. His distinguished career spanned 50 years and 25 volumes of poetry, as well as award-winning books of fiction and non-fiction, published in over a dozen countries. Winner of the Governor General’s Award for Poetry, the Lieutenant Governor’s Award for Literary Excellence, the Canadian Authors Association Award, among others, he was named an officer of the Order of Canada in 2014. Lane with a long association with UVic and received a Doctor of Letters (honoris causa) in November 2013 in recognition of his service to Canadian literature.

“Patrick has been celebrated in this country for many decades,” says Lilburn. “Soon a full range of poetry lovers in China will be able to feast on the brilliance and compassion of this extraordinary writer.”

Award-winning poet and novelist Patrick Lane passed away on March 7 at age 79, the result of a heart attack. His publisher, McClelland & Stewart, made the announcement, calling Lane “one of Canada’s most renowned writers” — a claim few would argue. 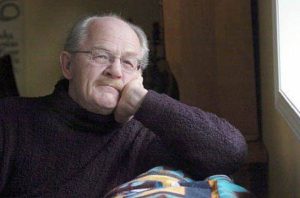 Lane’s distinguished career spanned 50 years and 25 volumes of poetry, as well as award-winning books of fiction and non-fiction, published in over a dozen countries. The winner of numerous accolades — including the Governor General’s Award for Poetry, the Lieutenant Governor’s Award for Literary Excellence, the Canadian Authors Association Award and three National Magazine Awards — he was named an officer of the Order of Canada in 2014.

His passing made headlines in media outlets nation-wide, including (but not limited to) CBC News, the Globe & Mail, CBC Radio’s As It Happens and On The Island, the Toronto Star,  Radio-Canada, Times Colonist, the Vancouver Sun, CHEK TV, CTV, Victoria News, The Tyee, CBC Radio’s The Next Chapter and North By Northwest (skip to the 00:56 mark to hear Writing professor Bill Gaston and alum Carla Funk, and 2:07 for alum Steven Price, and then jump to the 2:08 mark to hear this March 10 archived interview with Patrick Lane himself).

An influential member of the Department of Writing from 1992 to 2004, Lane was also famously married to Writing professor emerita Lorna Crozier; indeed, the Globe and Mail once described the beloved pair as “BC’s poetry power couple” and, in her acclaimed poetry collection The Book of Marvels, Crozier wrote of her husband, “We are at home with one another; we are each other’s home.”

Crozier herself reflects on Lane’s legacy in this March13 Canadian Press interview: “He brought beauty into even those places that do not have beauty on their own, and into the lives of people who are struggling,” she said. “He gave them a voice, and he gave them a place in letters. And I can’t think of many other poets who have done that.”

A free community gathering to honour and remember Patrick will be held from 7-9 pm Saturday, April 20, in UVic’s David Lam Auditorium (MacLaurin Building). This event will replace a previously scheduled ceremony to present him with the George Woodcock Award, originally slated for April 27 at the sxʷeŋxʷəŋ təŋəxʷ James Bay branch of the Greater Victoria Public Library.

Organizers are expecting a capacity crowd for this limited-seating event; please arrive early to avoid disappointment.

There will also be a second public memorial on May 19 at Langham Court Theatre.

A writer to remember

An editor, anthologist and frequent media commentator about poetry and Canadian culture in general, Lane was also a much sought-after teacher, having held positions at the University of Saskatchewan and as writer-in-residence at the universities of Toronto, Alberta, Manitoba and Concordia University. In recognition of his service to Canadian literature, he received a Doctor of Letters (honoris causa) from UVic in November 2013, as well as honorary doctorates from UBC, McGill University, UNBC and VIU. 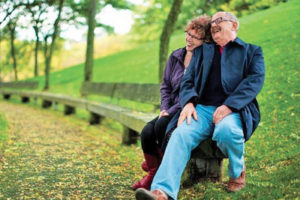 “Patrick inspired several generations of new writers with his poetic vision and generous spirit,” says David Leach, current Writing chair. “He would mentor and champion his students long after they had graduated from his classroom, and UVic. And while he was known as one of our country’s greatest poets, he was also a masterful and incisive prose stylist in fiction and personal essays with a voice unique to Canadian literature.”

He was also honoured to be one of the few poets to see his work gathered and published as a collected works in his lifetime: 2011’s The Collected Poems of Patrick Lane included more than 400 poems, dating back to 1962.

“What makes this career even more remarkable is that Patrick’s formal education stopped with the completion of high school. However, through wide reading and dogged perseverance, he became one of the best educated and unconventionally brilliant people I have ever encountered,” wrote noted Canadian author Guy Vanderhaeghe in support of Lane’s honorary doctorate.

Formal awards and designations aside, Lane was admired and well-loved by colleagues and former students, many of whom have gone on to influential literary careers themselves. 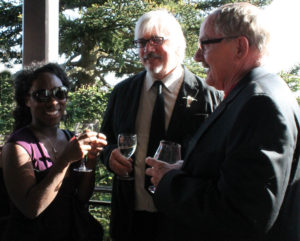 “No one can sum up adequately what a major figure like Patrick contributed,” says Writing professor Tim Lilburn, a literary colleague and close friend of Lane’s. “I can’t think of anyone who has had a more profound impact on Canadian poetry over the last 50-plus years. He was a great poet and an extremely generous mentor.”

That’s a sentiment with which double Giller Prize-winning author Esi Edugyan clearly agrees; having studied under Lane at UVic, she has described him as “my first great teacher.”

Carla Funk — the City of Victoria’s inaugural poet laureate — credits Lane with her future path; he was her first poetry instructor when she first enrolled at UVic when she was just 18 years old. “It was my very first creative writing class,” she told CBC Radio’s As It Happens in this interview from March 8. “He was the instructor who pushed me toward that, coaxed me and guided me and encouraged me toward this way of poetry, which was a different way of looking at the world, a different way of being in the world.”

“He was a giant of Canadian letters, one of our most essential writers,” wrote UVic Chancellor Shelagh Rogers upon the news of Lane’s passing. The long-time host of CBC Radio’s The Next Chapter, Rogers well knows Lane’s esteemed place in the world of Canadian literature. “He was also a mensch. #RestinPoetry.” 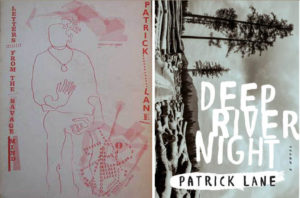 Born in 1939 in Nelson, BC, Lane earned early praise for his poems based on his “working man” experiences, and helped spearhead a new generation of Canadian poets by co-founding the small press Very Stone House in 1966. His first poetry collection, Letters From The Savage Mind, debuted that same year, and his final novel, Deep River Night, was published in 2018. His frankly honest 2005 memoir, There Is A Season, chronicled his rehabilitation from alcoholism, and earned him both the Lieutenant Governor’s Award for Literary Excellence and the BC Award for Canadian Nonfiction.

He was, as Vanderhaeghe notes, “a writer’s writer, universally respected and applauded by his peers as one of the most significant and gifted Canadian poets of the last half-century.”

“We express our condolences to Lorna and their family for this deep loss,” says Susan Lewis, Dean of Fine Arts. “Patrick is a legend in the field of Canadian poetry. I was deeply moved by his 2013 convocation address when we honoured him as Doctor of Letters.”

During that address which can be read in its entirety here, Lane poetically encapsulated 65 years of his life, reflecting on the changes he had seen both in the world and himself during that time. It seems only fitting to offer these final words from the poet himself: 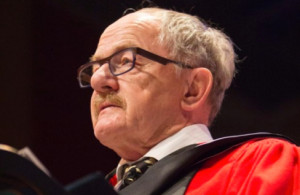 “I stand here looking out over this assembly and ask myself what I can offer you who are taking from my generation’s hands a troubled world. I am an elder now. There are times many of us old ones feel a deep regret, a profound sorrow, but our sorrow does not have to be yours. You are young and it is soon to be your time. A month ago I sat on a river estuary in the Great Bear Rain Forest north of here as a mother grizzly nursed her cubs. As the little ones suckled, the milk spilled down her chest and belly. As I watched her I thought of this day and I thought of you who not so long ago nursed at your own mother’s breast. There in the last intact rain forest on earth, the bear cubs became emblems of hope to me.

Out there are men and women only a few years older than you who are trying to remedy a broken world. I know and respect their passion. You too can change things. Just remember there are people who will try to stop you and when they do you will have to fight for your lives and the lives of the children to come.”

The Orion Lecture Series in Fine Arts Through the generous support of the Orion Fund in Fine Arts, the Faculty of Fine Arts, University of Victoria, is pleased to present: Jennifer Baichwal Canadian Filmmaker Public webinar: “Representing the Anthropocene:...

How can vulnerable communities build local and regional governance of food systems in the context of the climate crisis? That’s the question behind a new interdisciplinary film project co-directed by Department of Writing chair Maureen Bradley and Department of...

A new (and different) school year Welcome to issue 13 of the Fine Arts Connector and the start of a new academic year—one that we can definitely say will be unlike anything we’ve ever seen before. With only about 3,500 students on campus and the majority of classes...
« Older Entries