Most students wait until after graduation to start making their mark on the world, but Jasleen Powar already has something to sing about. Graduating with a BFA in theatre on June 15, the 24-year-old Powar has been making waves as Vancouver rapper Horsepowar, thanks to a trio of independent album releases, gigs at high-profile music festivals like Rifflandia and South by Southwest, and the kind of media attention most emerging artists only dream about. 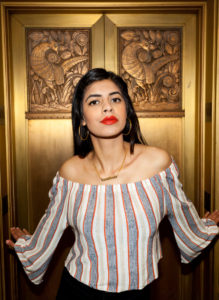 But it’s her unflinching rhymes and powerhouse Sikh-Canadian “Desi girl” persona (a term for girls born outside of South Asia but still upholding traditional values) that have earned the attention of the likes of CBC, Nylon, Vice, Rolling Stone India and The Georgia Straight. Horsepowar was also profiled in the Postmedia newspaper chain on June 8, with this feature of her running nationally in the Vancouver Sun, The Province, Calgary Herald, Edmonton Journal, Montreal Gazette, Calgary Herald and Ottawa Citizen.

As GQ India recently wrote when they named her one of the “Indian rappers to have on your playlist,” Powar is “what you get when you allow an opinionated slam poet with a (dare we say, unhealthy) obsession with ’90s Bollywood to take the microphone.”

In the nine months since it was released, her 2015 track “Queen” has earned nearly 65,000 YouTube views—not too bad for a suburban Richmond girl who, like many daughters of immigrant parents, looked to university as an acceptable way to move out before marriage.

“I wanted my independence, and UVic was far enough from the Lower Mainland but close enough for my parents’ comfort,” Powar explains about why she came here to study theatre. “It’s the same duality I write about in my music: being a Desi girl and having a lot of respect for my parents’ upbringing, but finding their views so backward from how I feel as a Canadian girl in 2016.”

Indeed, UVic’s acclaimed theatre program turned out to be an ideal fit for Powar, who left high school with both a theatre scholarship and a burgeoning reputation as a slam poet. It was here on campus someone first suggested throwing beats under her poetry, and where she did her first live rap performance (at Felicita’s), but UVic is also where she realized the true value of studying theatre.

“Everything you learn in theatre is so useful for whatever direction in life you choose to go,” she says. “It teaches you how to take a leadership role and manage a large group of people, how to work cooperatively and how to have the confidence to just get up there and do what you feel.” 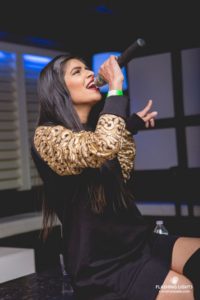 Powar singles out her time working with applied theatre professor Kirsten Sadeghi-Yekta as a highlight—specifically the outreach program at the downtown Salvation Army. “I did a couple months at their rehab centre doing weekly writing workshops with men who had been released from prison,” she recalls. “It was a really interesting experience for me as a young woman of colour to be working with all men—and all white men—trying to teach them something about writing. But part of applied theatre is learning to think on your feet; by contrast, I’m about to teach two spoken-word workshops at a Langley middle school, and I learned all that in theatre.”

Recently back from a trip to India that saw her performing in Delhi and shooting a new music video (that had Nylon magazine noting, “Horsepowar’s ‘Hi Everybody’ got right what Coldplay’s ‘Hymn for the Weekend’ got wrong”), Powar is confident that everything is going according to plan. Her March appearance at South by Southwest music fest saw her performing not only solo but also as part of both the Canadian and South Asian hip-hop showcases.

“It reassured me that there’s a niche and a demographic that have never felt represented in rap before. Sure, we have [Hindu rapper] M.I.A., but that’s just one person and one story—I can tell a whole other story, and people feel a connection with me.”

Powar links that connection with both her upbringing and her theatre training. “In high school, the brown kids didn’t think I was brown enough, but when I started pulling out these stories about being a Desi girl, people began to connect. There’s so many of us out there—not just Indian or South Asian, but any first-generation children of immigrant parents living that dual life: what our parents want for us versus what we want for ourselves. And my forte with this whole Horsepowar thing is performance, which brings me back to the theatre world.”

When asked about how she’s making all the right moves—being featured as the poster girl for the 2016 Vancouver international Bhangra Festival, for instance—Powar simply puts it down to hard work. “The internet is a really useful tool, if you use it right and are strategic . . . the cool hunters are always out there looking for the next someone, and they’re always talking.”

She also credits her overseas supporters. “India has a billion people—that’s a lot of people who can connect you with someone else in the world—and it has shown me a lot of love. GQ India released my EP on an exclusive stream before I even released it for download, and that was really cool.” Powar pauses and smiles. “India’s got my back—I love it!”

Physically distanced, culturally connected Welcome to issue 10 of the Fine Arts Connector, your regular listing of news, resources, activities and other shareable content from UVic’s Faculty of Fine Arts. It’s a handy way of keeping up with student,...

Alumni names in the news

There’s been a flurry of Fine Arts alum popping up in the media of late. Here’s a quick roundup. 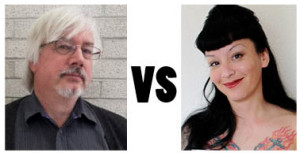 It’s Gaston versus Thanh! Who will win?

Writing grad Yasuko Thanh has been named as finalist for the Ethel Wilson Fiction Prize in the BC Book Prizes for her debut collection —and she’s up against none other than Department of Writing chair Bill Gaston. Thanh has been tapped for her debut collection of stories, Floating Like The Dead, while Gaston is named for his latest novel, The World.  Also on the shortlist for the BC Book Prize’s Dorothy Livesay Poetry Prize is Writing alum and former Writing instructor Patricia Young for Night-Eater, her 11th book of poetry.

Thanh also continues to make news thanks to the revealing news about her appearance in the 2014 PEN nude author’s calendar. The latest coverage appeared in the Times Colonist, hooked to her participation in The Malahat Review‘s upcoming WordsThaw event on March 23. 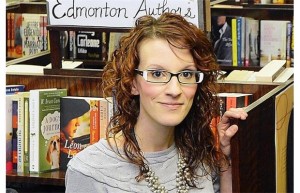 Three other Writing alumni in the news: grad-turned-Writing professor Joan MacLeod‘s new play The Valley was just announced in the Globe and Mail as being part of the lineup for Tarragon Theatre’s new 2013-14 season. CBC CanadaWrites Short Story Prize shortlister Eliza Robertson now has a Q&A up about the story that landed her a spot in the popular CBC writing contest; this is her third time entering, and first time as a finalist—fingers crossed for the whole “third time lucky” thing! And Jessica Kluthe continues to attract attention with her first book, Rosina, the Midwife—check out this Edmonton Journal article. 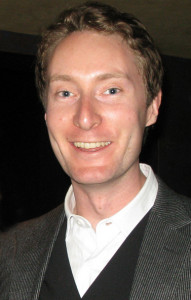 The move sees Medd leaves his position as managing producer of the nationally recognized Electric Company Theatre in Vancouver—whose artistic director and founding member is none other than new Department of Writing prof Kevin Kerr.  Among Medd’s other achievements (theatre program coordinator with the BC Arts Council, the Canada Council’s Theatre Assessment Committee, Vancouver’s arts assessment juries, etc.) are stints with both the Belfry Theatre and Intrepid Theatre, where he helped establish downtown Victoria’s immensely popular Metro Studio. 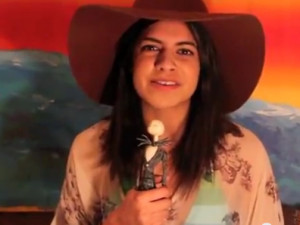 Will Jasleen Powar make it to MuchMusic?

In other Phoenix news, current Theatre student Jasleen Powar has made it to the top 40 in MuchMusic’s VJ Search competition. (Phoenix alumna Melanie Karin had also been on the longlist, but got knocked out.) Will Powar make it to the top 20? Vote for her here and help her make the cut!

Also on the television beat, Phoenix grads Peter Carlone (half of the sketch comedy team Peter ‘n Chris) and Mack Gordon have applied to be on the first-ever Canadian edition of The Amazing Race—you can watch their hilarious audition video here. The cross-Canada version of the race-around-the-world reality show will air later this year on CTV. And Phoenix grad and Theatre SKAM co-founder Amiel Gladstone is back in Victoria directing Pacific Opera Victoria’s upcoming production of Tosca. 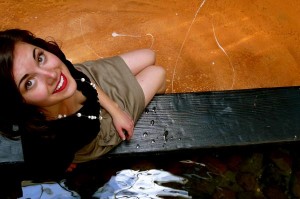 Staying in the media spotlight, recent School of Music alum Amy Wood made it through the first three rounds of voting in CBC’s Searchlight competition for the Best New Canadian Artist, earning a spot in the top five for the Victoria region before getting bumped. While at UVic, Amy studied voice with Music prof Benjamin Butterfield, but started playing and singing at the piano at a very young age. She now describes songwriting as an “obsession,” saying, “I can’t not write and lately it hurts not to sing for others.”

Wood is currently planning the release of an EP as well as a full-length album and is in the midst of covering song requests on her YouTube-based Sunday “Request Booth”. (Interesting side-note: Wood’s Searchlight submission was actually recorded in the UVic studios and mixed by one of School of Music Audio Specialist/Recording Engineer Kirk McNally‘s student recording techs.) 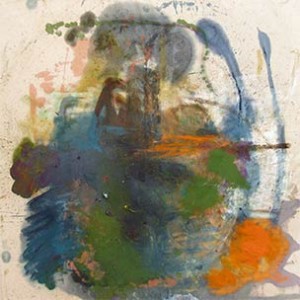 Finally, three Visual Arts alumni—Stephanie Aitken, Katie Lyle and Shelley Penfold—are featured in Drama of Perception, the latest exhibit at Deluge Contemporary. Aitken currently teaches at Langara College and Emily Carr University in Vancouver, Penfold lives and paints in Vancouver, and Lyle received a fair bit of attention last year when she was named the honourable mention winner in the 14th Annual RBC Canadian Painting Competition for her oil painting, “White Night.” She earned a cheque for $15,000 and her painting was added to RBC’s 4,000-piece corporate art collection.

Drama of Perception is also curated by Visual Arts prof Sandra Meigs, and runs to April 13 at 636 Yates.