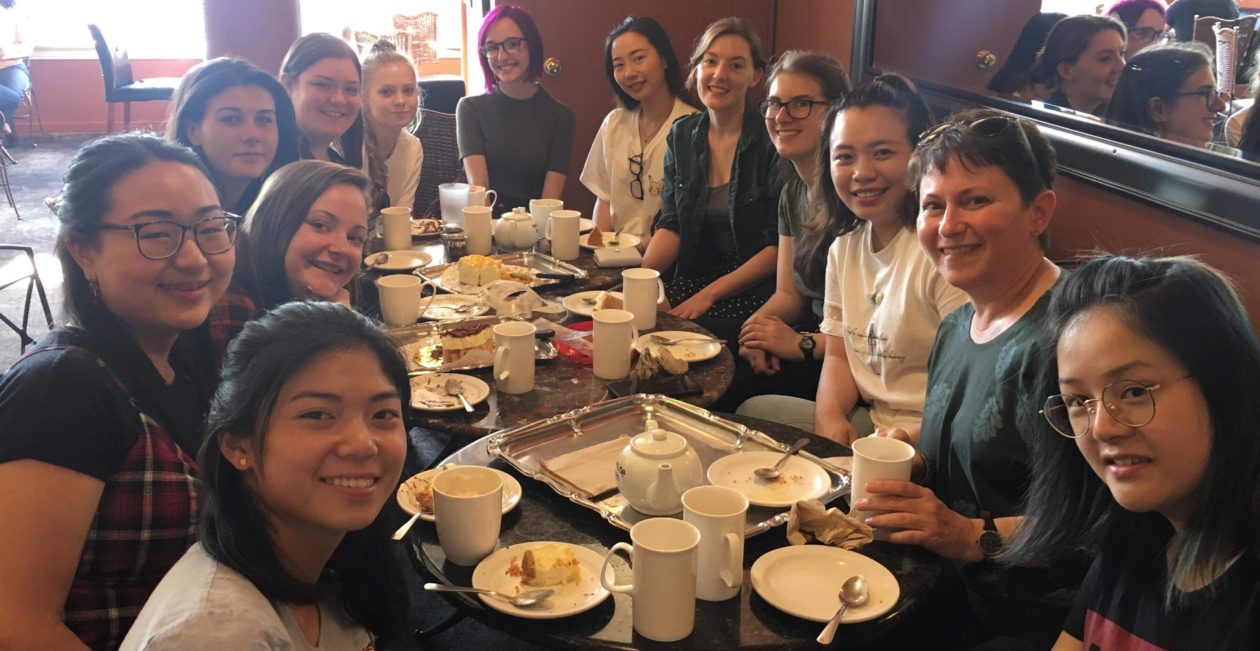 25 January 2017 UVIc noon- 2 pm Open Masterclass. Our weekly flute master class will be extended in length and open to the public on this day. The class will be held in the Phillip T. Young  recital hall in Maclaurin B wing on UVIc’s campus and will focus on solo flute repertoire (unaccompanied solo pieces). I will also be discussing University entrance audition preparation: bring your questions!  This is a free event but pre-registration is requested. If you plan on attending please let us know in advance by email at ssnizek@uvic.ca with the subject line: 25 Jan master class. All aspiring flutists are welcome to attend and audit the class. Four current undergraduate flutists from UVIc will perform.

21 Jan 2017 Saturday 10:15-13:00  (Please note this event has been RESCHEDULED from 7 January 2017) Hosting Lorna McGhee’s guest class/recital at UVIc in PTY recital hall Maclaurin B wing UVic School of Music. All are welcome to attend; admission by donation. Masterclass will begin at 1015– 1145 with Lorna’s recital following from noon to 1. Reception to follow until 2 pm. Please join us in welcoming this truly inspiring artist and teacher to UVIc!

15 November 2016 Berlin, DE Lecture recital on composer Petr Eben’s life and work under Communism. Sponsored by The Forum Voix Etouffées (France), Orfeo 33.89 (Germany) and Erstickte Stimmen Forum – Wien (Austria); an international conference under the patronage of the European Union, the French Embassy in Germany, the Franco-German Council for Culture and Radio France Internationale on Tuesday 15th November 2016 at the
French Institute in Berlin (Maison de France) on “1945, Europe Year Zero. Music and cultural politics under Nazism and
Stalinism: divergences and similarities.”

27 June 2016 8 pm at the PTY recital hall UVic School of Music This special recital will feature three works included in the Suppressed Music recording project (sponsored by the University of Victoria and the Jewish Federation of Victoria and Vancouver Island). Snizek will be performing the Sonatas for flute and piano by Leo Smit and Boris Blacher with guest pianist Dr. Yoomi Kim, and the Jan van Gilse trio with guest violinist Aaron Schwebel (concert master National Ballet of Canada) and guest violist Keith Hamm (principal violist Canadian Opera Company). Admission by donation.

30 April 2016 Guest recital of solo flute works (Jean Jean Etude#5 and the CPE Bach solo Sonata in a minor) and masterclass for advanced flutists at Vernon (BC) Community Music School.

UBC Wednesday Noon hour concert series 4 November 2015 at UBC School of Music recital hall in Vancouver, BC. Czech music with pianist Alexandria Le. Repertoire same as above 5 November recital.Tickets for Adults, Students, Seniors: $5 each (at the door/cash only); Groups of 10 or more $4 each (reservation necessary ~ 604-822-5574 or email music.concerts@ubc.ca to reserve) or UBC Noon Hour Series season pass (Adults, Students, Seniors): $75 (Available at the door).

Edmonton, Alberta 11-15 September Master classes at Taylor Conservatory and University of Alberta; recital U of A’s Convocation Hall on Sunday 13 September at 2 pm. Theme of the recital is ‘Suppressed Music and the Third Reich.’

EDMONTON 13 SEPT 2015 RECITAL DETAILS
About ‘Suppressed Music’: The term ‘Suppressed Music’ usually refers to music which was prohibited by the Third Reich, although the term could be used to describe any music which has been suppressed. My recital programme ‘Suppressed Music and the Third Reich’ will feature music written by composers of Jewish background and various nationalities (the phenomenon, like the Shoah or ‘Holocaust’ was an international one). Each composer represented on this programme had very different life circumstances, musical styles and career and life experiences, despite the shared similarity of musical suppression under the Nazis. All the music featured on this programme, despite the variety of styles, shares a very high degree of quality. It is hoped that this concert will help promote greater scholarly attention and inclusion into other flutist’s concert offerings.

About the featured composers:

Boris Blacher (1903-1975) was a composer who was considered ethnically “impure” being of mixed ethnic background (he was 1/4 Jewish as well as having a father who was Russo-Asian-Estonian). He also held leftist political views and wrote in a style which was not endorsed by the regime. He lost his teaching post at the Dresden Conservatory as a result of his non-cooperation with the regime, and his work’s dissemination was affected. Pianist Sylvia Shadick Taylor and I will be performing his excellent Sonata for flute and piano.

Hans Gál (1890-1987) was a prolific and long lived Austrian composer of Jewish background who eventually settled in Edinburgh. Following his racist dismissal as Music Director of the Mainz Conservatory, he also had to flee Austria after the Nazi regime took power there. After finally immigrating to the UK, Gál was interned by the British government as an ‘enemy alien.’ He regarded this deeply traumatic experience as the worst period of his entire life. For my DMA thesis on this subject, please see https://circle.ubc.ca/bitstream/handle/2429/33917/ubc_2011_spring_snizek_suzanne.pdf?sequence=1

Gál’s music was largely conservative and deeply imprinted by the Austro-German musical tradition. Gál, in fact, was a direct musical descendant of Johannes Brahms through his work with Eusebius Mandecewski. We will be performing Gál’s lovely Drei Intermezzi (which Gál wrote at the tender age of 84!).

Petr Eben (1929-2007) was a Czech composer who as a teen survived a German Concentration camp (he was deemed Jewish by virtue of having one Jewish parent). This terrible ordeal was only followed by further suppression by the Communist regime of post war Czechoslovakia, since he was a devoutly practicing Catholic. His regular church attendance did not escape the disapproval of the Czech authorities and his career at Charles University (Prague) was, as a result, largely stagnant despite his popularity with the students there. Eben’s musical style is utterly unique and expressive, and this trio (Drei still Lieder) for flute, voice and piano is one of my very favourite works for flute.

Leo Smit (1900-1943) was a talented and critically recognized Dutch composer of Jewish background whose life was tragically cut short by his murder in Sobibor. We will be performing the beautiful slow movement from his neo-classically inspired Sonata for flute and piano, which was his last work (completed in February 1943, just before he and his family were arrested and transported to death camps). Smit’s musical style often evidences jazz influences and a subtle French sensibility, stemming from his nine years of musical study in Paris beginning in 1927 .

Mieczslaw Weinberg (1919-1996) was a Polish composer of Jewish background who fled eastward from Warsaw and settled in the Soviet Union where he became a respected composer. However, like the aforementioned Petr Eben, Weinberg’s troubles continued under the Communist regime. Weinberg became the son in law of a prominent Jewish artist in Moscow who ultimately was murdered by Stalin (he was accused of plotting to murder Stalin, a completely unfounded charge with strong antisemitic aspects). This family association led to Weinberg’s eventual arrest. Luckily for Weinberg, Stalin died before he could be further persecuted. Weinberg became a close associate and friend of Shostakovich and the two men often shared each other’s new works with each other for comment before releasing them publicly. One can hear a keen similarity in their musical styles. His Twelve Miniatures for flute and piano is an especially substantial, effective and expressive work; we will be performing movements three through twelve.

3 September 2015 Thursday at 130 pm lecture recital as part of Global Connections: Critical Holocaust Education in a Time of Transition” interdisciplinary and international conference hosted by UVic. This lecture- recital features the Huyton Suite (trio for two violins and a flute, written during WWII British internment and performed here with Dr. Snizek by violinists Sharon Stanis of the Lafayette Qtet and Christi Myers of the Victoria Symphony) by Hans Gál.  For more info please see http://conferences.uvic.ca/index.php/gc/gche

For further information please contact the school at 250-860-1737 or write to info@kelownacommunitymusicschool.ca

Dr. Snizek in recital, together with pianist Bruce Vogt, on 28 September 2014 at 230 pm in the Phillip T. Young recital hall at the UVic School of Music. This exciting and eclectic programme will include Uebayashi’s Sonata for flute and piano; Bonis’s Sonata for flute and piano, Koechlin’s Epitaph for Jean Harlow (with saxophonist Wendell Clanton); Saairaho’s Laconisme d’aile for flute and electronics (the latter provided by Kirk McNally); and an aria from J.S. Bach’s Easter Oratorio (with soprano Anne Grimm). For tickets please visit https://tickets.uvic.ca/

This concert will also be live streamed; please see http://finearts.uvic.ca/music/events/live/

On Sunday 5 October 2014 @ 2:30,  Dr. Snizek will be performing with pianist Michelle Mares at the Old School House  ‘Music on Sundays’ concert series in beautiful Qualicum Beach, BC . Programme will include the beautiful Canadian work, the Srul Irving Glick Sonata;  the well known and cheerful J.S. Bach Sonata in E flat major; the French salon piece by Busser known as  ‘Prelude et Scherzo’ and Japanese born French composer Yuko Uebayashi’s Sonata for flute and piano. This last piece, which is breathtakingly lyrical, has been called “Ravel in Tokyo;” it is quite an exciting new addition (published in 2012) to the  flute repertoire. For tickets please visit: http://www.theoldschoolhouse.org/MOSFall2014.html