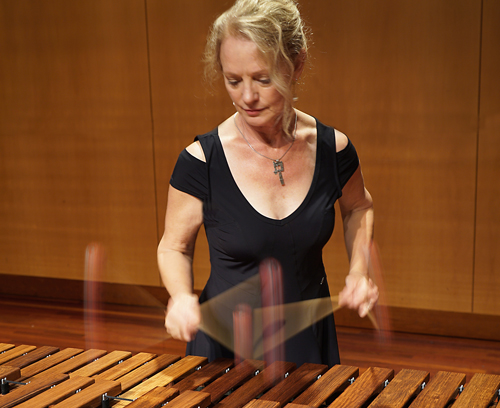 Play Like a Girl is a 70-minute “concept” performance by multi-percussionist Luanne Warner Katz, featuring energetic and evocative new music for marimba, vibraphone, percussion and voice. Much like the intimate—and now rare— experience of listening to a record album from start to finish without interruption, the works on this concert are performed without intermission, linked by sonic interludes and vocalizations.

The program title comes from the piece of the same name by Eve Beglarian, a recent recipient of The Herb Albert Award in the Arts. Beglarian’s Play Like a Girl is a series of variations on the Bulgarian folk song Kaval Sviri (which many may recognize as the popular theme song from Xena: Warrior Princess). Also on the program is Steve Reich’s high-energy Electric Counterpoint, Katz’s improvisatory Why Can’t I Fly for multi-percussion and voice, Frederic Rzewski’s classic 1985 piece To the Earth for speaking percussionist and four clay flower pots, as well as works by Chinary Ung and Osvaldo Golijov.

Luanne Warner Katz has graced many stages with her dynamic and energetic style.  A graduate of Eastman School of Music, Luanne has performed for many years in the percussion sections of orchestras across the United States, including the Oregon Symphony, the San Francisco Opera Orchestra, and the Boston Pops Orchestra.

A former member of the Vancouver Symphony Orchestra, Paula Kiffner has also performed as guest principal cellist of the Royal Winnipeg Ballet, and appears frequently as a recitalist and concerto soloist throughout the Pacific Northwest. She is currently a faculty member of the Victoria Conservatory of Music.

Tune in here for the live broadcast.