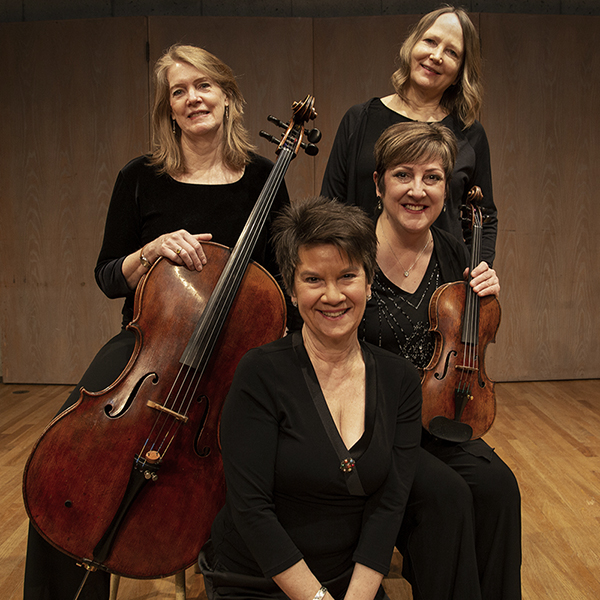 *PRE-CONCERT TALK with composer Kelly-Marie Murphy at 7:45pm in the Recital Hall

James Campbell has been called “Canada’s pre-eminent clarinetist and wind soloist” by the Toronto Star. He has performed as soloist and chamber musician in over 35 countries with over 65 orchestras and toured with over 40 string quartets. Of his 50+ recordings, the BBC and The Times of London rated his recording of Brahms’ Clarinet Quintet as the best available, while his CD Stolen Gems (Marquis Records) won a Juno. He has been named Canada’s Artist of the Year, awarded the Queen’s Gold and Diamond Jubilee Medal, an Honourary Doctor of Laws, and the Order of Canada. James Campbell has been Artistic Director of the Festival of the Sound since 1985 and was Professor of Music at the famed Jacobs School of Music of Indiana University from 1988 to 2019. He continues to give master classes throughout the world.

Formed in 1986 in Detroit, the Lafayette String Quartet still comprises its four original female members, a distinct and welcome rarity in the classical music world. All members of the LSQ have taught and performed at the UVic School of Music for over 35 years. With more than a dozen albums and a thousand appearances worldwide behind them, the LSQ will retire as an ensemble ­— 2022/23 marks their final season.

Tickets can be purchased by phone (250-721-8000) through the Phoenix Theatre Box Office and at the door.
Advanced tickets are recommended.

Admission:
Pay What You Can ($12-$35)
Buy tickets:
https://finearts.uvic.ca/music/calendar/tickets/