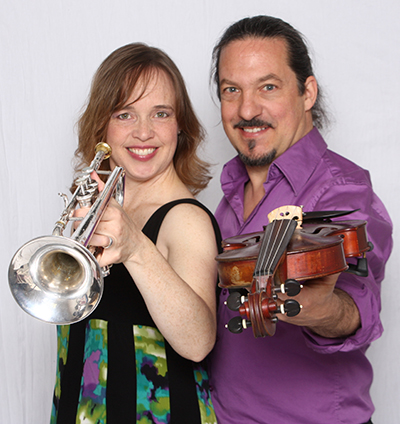 Three renowned performers weave together a captivating program that combines classical and folk music traditions in a variety of styles including Celtic, Latin, classic jazz, and baroque.

UVic Professor of Trumpet, Merrie Klazek, is active as a performer, teacher and recording artist in orchestral, chamber, solo, traditional and popular music. Her musical travels have taken her around the globe. She has appeared as a soloist with a variety of Canadian orchestras and ensembles and was principal trumpet with the Thunder Bay Symphony for 17 years. She is a founding member of Brass Northwest in Thunder Bay and currently plays with Pinnacle Brass Quintet. Klazek appears on numerous recordings including four JUNO nominated albums, and is currently working on her second solo recording which will highlight the trumpet in settings of various world styles in collaboration with renowned folk musicians.

Pierre Schryer is one of Canada’s leading traditional fiddlers. A celebrated performer and producer, Schryer has established himself as a gem on the music scene among fans and fellow musicians. He was immersed from an early age in the Franco-Ontarian traditions of his heritage, through multiple fiddle competitions along with his triplet brothers. As a solo performer Pierre has received numerous titles and awards including Canadian Open Fiddle Champion, Canadian Grand Masters Fiddle Champion, Violoneux Championnat, and North American Irish Fiddle Champion.

Andy Hillhouse has had a varied career in music. He has been a touring bandleader in the Anglo-Celtic music world, a choral director, a music and culture scholar, and now a festival organizer. As a musician he toured North America and Europe through the 1990s as founder and manager of the folk rock/funk band Mad Pudding. Since 2000 he has toured with several of the Celtic music scene’s most respected and exciting acoustic musicians, including west coast innovative fiddler Zavellennahh Huscroft, champion Canadian fiddler Pierre Schryer, Irish flute player Nuala Kennedy, and Juno winners The McDades. He is also the Artistic and Executive Director of the Harrison Festival of the Arts. Andy is a respected teacher and workshop facilitator as well as former director of the Universal Gospel Choir, the Sarah McLachlan Music Outreach Choir.